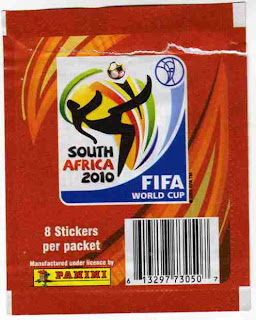 I am going absolutely insane trying to find these things. I first found five packs and an album at a Wal-Mart near work. I happily snatched them up and stuck my stickers. I later found a display empty of stickers with a few albums that had all their free packets of stickers peeled off. Since then I have been to damn near every WalMart in North Atlanta and found bupkis. Target, don't get me started on Target. If I ever find the card distributer in my area I'm gonna kick 'em right in the ass and tell them to stop being lazy and get some new stuff in for crying out loud. This pack I got from a hobby store for a buck and a half which is a ripoff but a junkie needs his fix.
Full disclosure: Of international football, I know nothing. I love watching World Cup matches though and really love sticking stickers into sticker albums.
576 Cesc Fabregas ESP 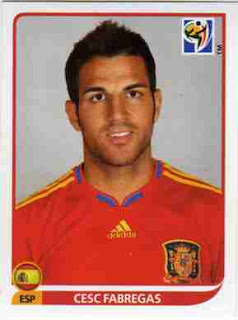 From what I've read here and there about this year's World Cup, Spain is a serious favorite to win it all. This dude plays for Arsenal, a club I know from a really good British movie that was remade into a thing with Jimmy Fallon and Drew Barrymore that got Americanized from football to baseball and is known for Drew saying Yass-ter-ZEM-ski. Ok, so I'm not completely clueless about football am I!
533 Kanga Akale CIV 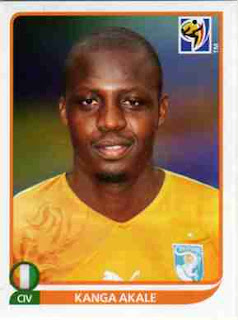 I was confused as hell by the acronym CIV until I looked in the album and saw it was Cote D'Ivorie AKA Ivory Coast. I'm kinda rooking for these underdogs to get out of their group. Not an easy task with Brazil and Portugal in there. I pulled Dider Drogba from my first pack and it turns out he's pretty darn good. I'm pretty proud of myself that I got through this entire paragraph without making a Winnie the Pooh joke.
490 Juan BRA 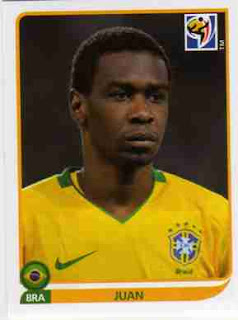 I know it's a Brazil tradition that their players are known by one name, like Pele and Ronaldinho, but Juan? Really? There's gotta be like five million Juans in Brazil. One of 'em could easily crash a Cup game, put on a jersey and sneak right into the game! Hey, you! Are you Juan? Yes.... yes I am. No one would ever know.
The real Juan plays for Roma and I'm slowly working my way up into an ITALIA!!! frenzy so go Juan!
8 Half of Durban stadium 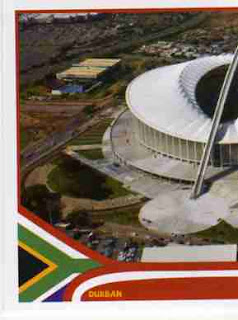 One one hand, these two-fer double sized photos look cool in the album. On the other hand you always get three stickers of one half and none of the other. In the packets I got today I got three different halves of stadiums but no whole stadium. There are 10 stadiums being used so I guess that's not too bad.
289 Mark Bresciano AUS 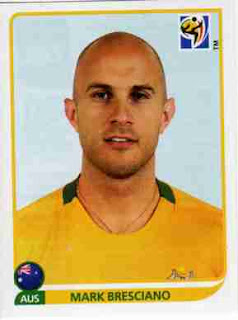 Oy! All you Bruces and Sheilas bettah put some moar shimp on the barbie and crack oven a beeyah cuz the Aussies are ganna win it all, mate! Yeah,I got nothin' here. Oh wait! Mark plays for Palermo! ITALIA!!!
(All these teams are printed in the album I don't actually know this stuff)
((also: ITALIA!!!!!))
470 Martin Skrtel SVK 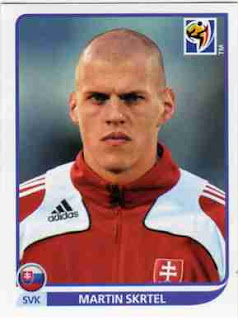 Graar! I am a football player from Slovakia! I am very angry! Don't call me a Czech! Chechoslovakia doesn't exist anymore! My team plays in group F and we are going to get out butts handed to us by ITALIA!!!
Whoa this dude plays for Liverpool. He kinds looks like a scouser hooligan don't he?
481 Jan Novak SVK 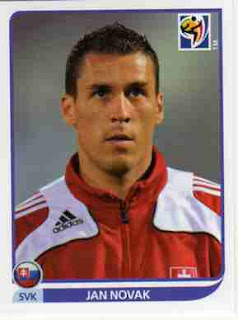 One thing I've noticed in opening 10 packets of this stuff is that there is very often two players from the same squad in the pack. This one was the Slovenska Republica pack. I shouldn't have made fun of Martin up there because every one of the stickers I have from Slovakia looks like the cameraman said "Ready? I'll take the picture in five...four... *CLICK*"
218 Landon Donovan USA 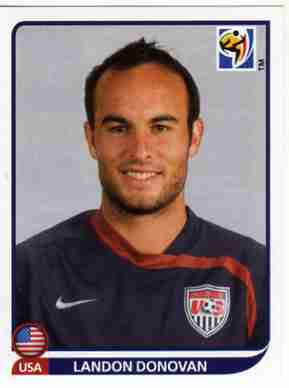 Since I overpaid for the packet I pretty much needed to land a star to make the extra cost worth it. I think I saw this sticker in the case for a buck so I didn't do too bad I guess.
Each and every one of these stickers now resides safely in my album. Oh God, I need more of these so badly... PANINI GET MORE OF THESE IN THE STORES DAMMIT!

The funny thing is that pretty much nobody in Australia talks like that. Except for Paul Hogan.

Oh, sure, there's plenty of people with that broad Aussie accent, but nobody says "shrimp on the barbie" because they're called prawns, dammit!

I share your pain. I've been on a search for these ever since I read your first post about them. I'm convinced that they don't exist.

I actually went to a Wal Mart for the first time in six years trying to find packets of these things... and failed. Target replaced their with Toy Story 3 and Cars albums/packets.

I've opened 104 packets and only have one completed team, South Korea. I'll probably knuckle down and buy another damn box.

Also, I've gone from calling him Landycakes years ago to having ordered a Donovan jersey.