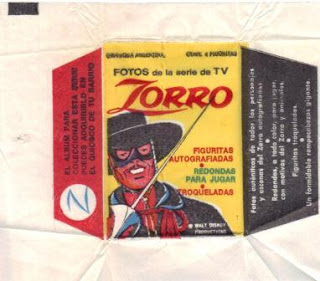 Sometimes, I poke around eBay long enough that I come across something I had never seen and will probably never see again.  This is the case with this 1958 Zorro pack!  The wrapper is actually PAPER and not even wax covered.  And, it SMELLS like it is from 1958 - that same 'old book' smell I remember from my Great-Great Aunt's house as a kid. 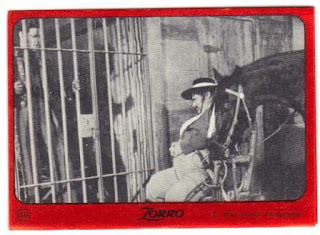 The pack has two items in it.  The red sticker/card above was the first thing in the pack.  The sticker-cards feature scenes from the TV series. 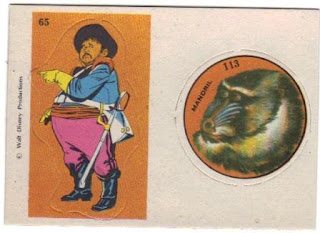 The other item in the pack is this card with two punchouts.  I have no idea what one did with these things, though.
All-in-all, a little money spent for something that pre-dates me by 11 years!  I think that is pretty cool.
**Note: I just realized the wrapper say "4 Figuritas" but mine only had TWO! I got ripped off, man! Dang it.
Hold the phone! 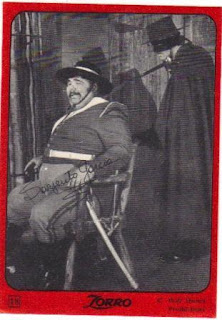 My 7 year-old daughter 'found' this sticker, uh, stuck, to the back of the other one in the pack!  Sweet!  We don't need no steekin' badges!

That's a pretty cool pack of cards though. Maybe the two figures in the one card count as two "figuritas". I don't know, just a guess.

This clearly sets the record as the oldest pack opened here so far. I'd be curious to see if there'll be anything older.

The only problem is that opening almost anything else besides Argentinian Zorro that old is easily at least a three-figure proposition.

Hi,
The round one -redonda, in spanish, the one with the monkey- is to play. You throw your figurita against a wall and you friends do the same. The nearest figurita to the wall is the winner, and the owner takes all.
So, with the redonda,the troquelada (cast?) and the other two, you´ve got 4 figuritas. You didn´t ´been rip off, wich is a very uncommon thing in Argentina. Congrats!