Written by --David at 11:18 PM
I've been out-of-pocket, blogwise, as many of you have noticed.  Or not.  Either way, I wanted to get back into the swing of things and add a little something different to the mix here once again.  Tonight, I present "Wyvern:" 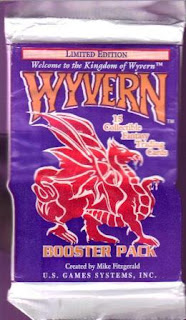 The wrapper looks like something created by Impel.  Each pack contains 15 cards and the game basically plays like any other TCG out there. 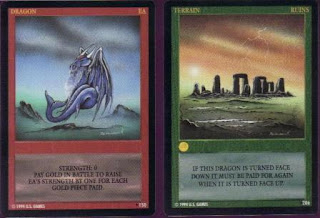 The first two cards in the pack are an "EA" and "Ruins."  I really have no idea what's going on here, but evidently Stonehenge is part of the deal.

Next up, we have the "Midgard Serpent," King Arthur," and "Poison Breathing." The cartds have words written in English, yet I have no understanding as to their meaning.  It's a lot like opening a dictionary and reading every 135th word, trying to make a coherent sentence.

Here, we have an "Avalanche (which turns all face-up dragons face-down - how appropriate)," a "Village," and "Zeus."  You'd think the Zeus card would be seriously kick-butt. All he does is prevent scouts from attacking. That may be great, but it doesn't SOUND great and powerful.

"Gold Shortage" makes everyone ante up, a "Crystal Ball" lets you peek at other players' cards, and "Firebreathing" gives you a bonus modifier. Lovely. 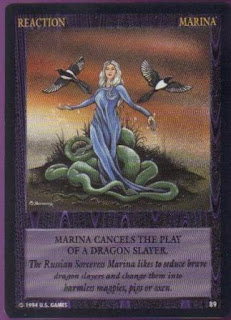 And speaking of lovely, we have "Marina," who likes to "seduce brave dragon slayers and change them into harmless magpies, pigs or oxen."  I wonder if that is her choice of the hapless slayer's?
And so, there you have it.  I disappear from the face of the blogosphere, only to show up wielding some weird TCG.  Yeah, actually, that's about right for me.  Thanks for keeping my name on the list!

Email ThisBlogThis!Share to TwitterShare to FacebookShare to Pinterest
Labels: 1994 US Games Wyvern

Always thought that "Wyvern" was a weird word. My geeky fantasy gaming friends would have plastic knife fights over whether it was pronounced "why-vern", or just "vern" with the first two letters silent.

I always quietly sat on the side while they scratched each other red, thinking that it was the former. No way it could be the latter.

I know about a silent letter in a word (like gnome), but two?