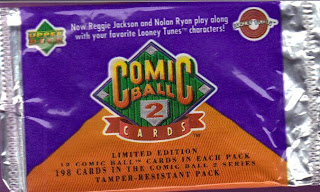 I received this as part of a "Non-Sport" purchase.  Apparently, cards featuring Reggie Jackson and Nolan Ryan in the company of cartoon characters are not "baseball" enough to be considered a sport. 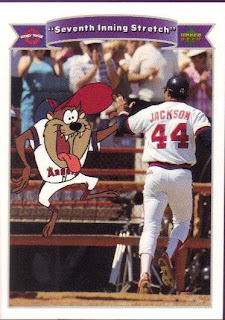 Taz gives Reggie a high-five.  Each card features a title ("Seventh Inning Stretch" here), the Looney Tunes and UD logos and some kind of picture.  Sometimes, the pictures are of actual people.  Other times, well, it's just looney.

Every card ties the Looney Tunes cast into a baseball-related scenario.  The backs of the cards feature trivia questions with answers.  Off whom did he (referring to Jackson) hit his famous all-star game home run?  No, really, without Google.  Go ahead.  Okay, fine, it was The Pittsburgh Pirates' Dock Ellis.  Happy now? 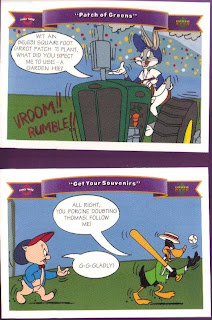 I'm not sure if you put the cards in order they would tell a story. Either way, the "humor" on the cards is a bit reaching.  Of course, wasn't most of the humor in Looney Tunes? 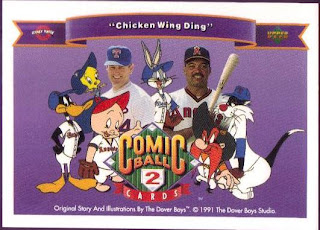 This appears to be the title card.  I have no idea what chicken wings have to do with it, but how do you have chicken wings without Foghorn Leghorn and the Chicken Hawk!?

"So, Nolan, you're one of the greatest pitchers ever, right?  Well, we'd like to take some pictures of you pretending to talk to Bugs Bunny.  Yes, I said Bugs Bunny. Hello?  Hello, Mr. Ryan?"
*This post appears in a three-way cross-posting between "APAD," "A Pack To Be Named Later," and "Things Done to Cards."

UD must have really thought people were stupid enough to buy anything.

They knew that Comic Ball I was a hideous, tragic fail by the time they decided to clear cut tree farms to bless us with Comic Ball II ("now 70% more esoterically unfunny!").