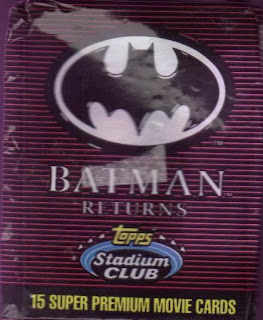 It's purple and black. It has a big 'bat signal' on it. And, yes, it says "Stadium Club."  Maybe it's just me, but shouldn't "Stadium Club" cards depict things that take place, oh I dunno, in a STADIUM!?

The cards feature borderless (hence, the Stadium Club nomenclenture) stills from the movie, "Batman Returns."  Starting off with Michael Keaton isn't bad, I guess, but as we will see, there is much to behold in this pack.  Ah, for example, Michelle Pfiffer is in the second card! Nice.

The backs of the cards feature an alternate still and information about the film or the actor potrayed on the front.

And then we have a duck. A big, big duck. For the Penguin. There is something not right about that.

You cannot have too many cards of Catwoman. You just can't. It's in the rules.

He's... Batman.
Overall, the pictures are actually very well done.  I take issue with using the Stadium Club name on a non-sport set, but hey, who am I to say?