Written by TheRealDFG at 2:56 PM
Back in 1997, this was one set that never really jumped out at me and therefore I really didn't have anything from it.  It still gets one of those junk wax labels but I kind of like these cards.  The white-border is appealing considering most of the stuff these days is full bleed.  The underlying theme here is the mail system, hence the stamp logo in the top left corner and some of the insert sets, including a series of player postage stamps that go with randomly inserted post cards. 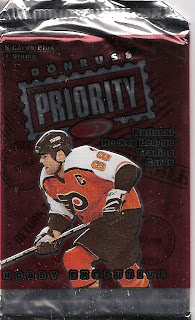 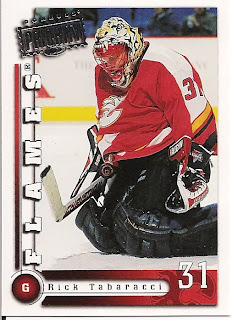 #105 Rick Tabaracci
I always wondered what happened to Rick.  He was drafted by the Pens in 1987 and only played 1 game before bouncing around the league.  He disappeared from my collection as a member of Colorado after 1999-00. 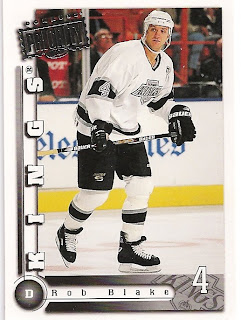 #49 Rob Blake
Blake played 11 years with the Kings before becoming a rent-a-player for the Avs to help them win the Cup in 2001-02.  Colorado liked his contribution to the team so much that they kept him around another 4 years. 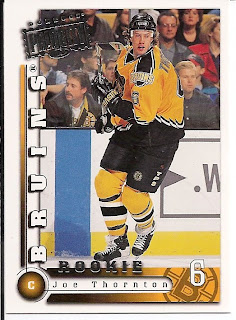 #173 Joe Thornton (R)
Technically not a rookie card, even though it clearly says Rookie.  Jumbo Joe is currently the big man on San Jose's line with Marleau and Heatley. 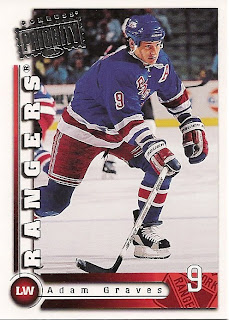 #83 Adam Graves
Graves was in the league for 5 years and never really got off the ground.  It wasn't until he came to New York that he became a marquee player. 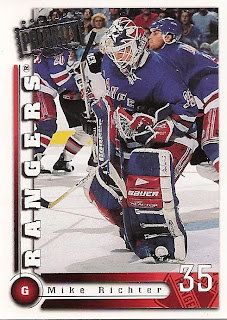 #143 Mike Richter
Another Ranger in the same pack.  Richter was always a goalie I loved to hate. Too many bad memories of the Pens getting burned. 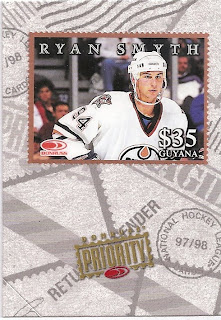 NO# Stamps - Ryan Smyth
So apparently there is a post card of Ryan Smyth that this stamp corresponds to.  On the back it says "Look for the featured player on the corresponding postcard & match it with this stamp".  No thank you.  Am I the only one that thinks that postage is too much in Guyana?