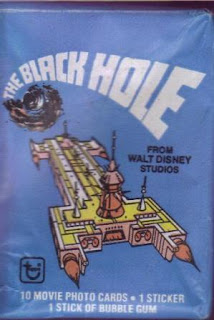 The Black Hole was one of the few movies that I have never seen, yet possessed nearly every single toy associated with the movie.  I have no idea why I had (and wanted) the toys for the movie, other than perhaps the whole "Star Wars" thing going on.  This movie came out between Episodes 4 and 5 of Star Wars.
Each pack has 10 cards, a sticker, and a piece of gum.  Yes, there is gum from 1979 in this pack: 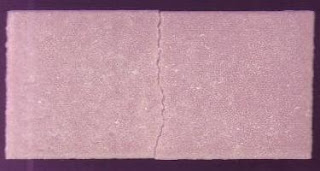 Isn't that a lovely piece of gum from the time I was 10 years old?  It is much nastier in person. Much nastier. 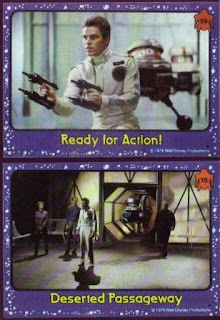 I don't remember anything about the movie or the toys, other than the little robot guy that you could raise and lower his head.  Whoop-dee-doo.

Hey, that's the little robot guy in the last card above on the left! Cute little fella, ain't he?

I guess if I had to pull a 'cool' card, it would be the one that most closely resembles the scene depicted on the wrapper. Not bad, right? Right?

Email ThisBlogThis!Share to TwitterShare to FacebookShare to Pinterest
Labels: 1979 Topps The Black Hole

Holy Snikes! I have this whole set. Great....now I feel old! It was a great movie but I'm not too hyped about them redoing it but I'll have to wait and see.

The "Destination: The Black Hole" card is just asking for a Photoshopping with that caption.