Written by Roy at 4:10 PM
A few months ago I stated my card collecting goals. One which I forgot to include, was to buy less baseball, no football, and much, much more hockey.

Today I went with $90 in rolled change to the CoinStar located at the unfriendly neighborhood (2o minute drive) Sprawl Mart, with intent of using the cash as my meal/emergency money in Baltimore this weekend.

But here is what I did get, in what I viewed as the "better pack" if only for the presence of a Maple Leaf bud, if you will. 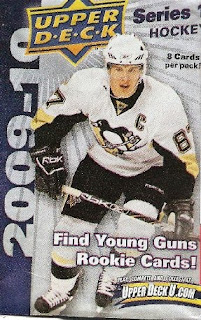 Generic Pack Scan. Sidney Crosby on the front didn't convince me to buy it. In the past 5 years it is Crosby, Thornton or Ovechkin on the front of EVERY PACK. Why not Mike Richards? Martin Brodeur? Ryan Miller? Maybe Nazem Kadri in few years? 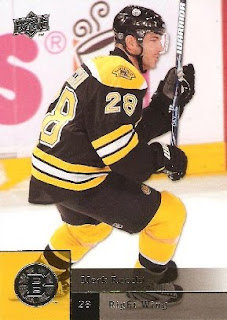 Boo. Bruin in the first pack. At least he wasn't an ex-Leaf traded for a complete bum (I'm looking at you, Tuuka.) 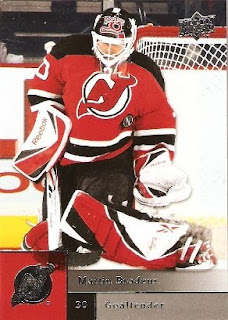 Marty Brodeur. Excellent. NJ Devils hold that #2 or #3 place in my heart. Which is broken. (I'm looking at you, Brian Burke.) Marty made one of the greatest saves I have ever seen in my life. 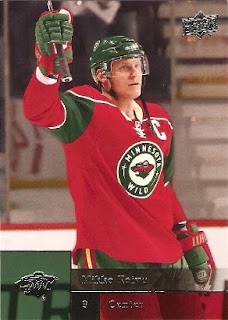 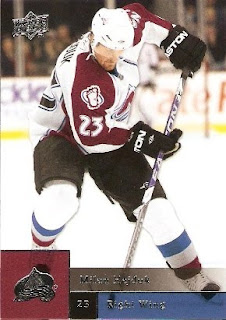 Very typical hockey card here. But Milan, I wouldn't skate with your head down too long. I like the color scheme on this card. One thing 09-10 Hockey had over 09 baseball is the color blocks that match the team colors, and not just, well, brown. 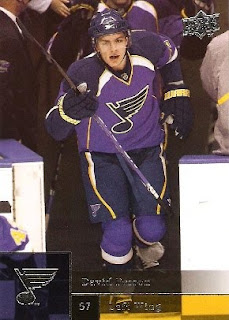 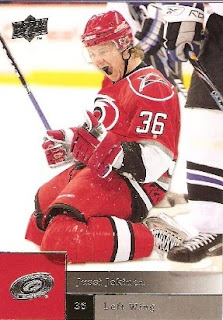 You'd think hockey would have more goal celebration cards. Anyways, this is a great one. And I HATE the 'Canes. If they were still the Whalers, I'd be down. But no, when they beat Edmonton a few years back, I decided to hate them. And Rod Brind'Amour's crooked ass nose. 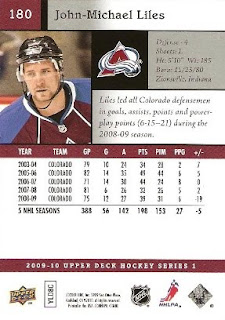 Card backs are exactly like 09 UD baseball. Simple, boxy, team-colored design. Not bad, not amazing. Liles has been a steady defensemen the whole time I've been watching hockey. The -19 in 08-09 was undeserving and is a terrible stat to look at when you're evaluating a special teams d-man like Liles. 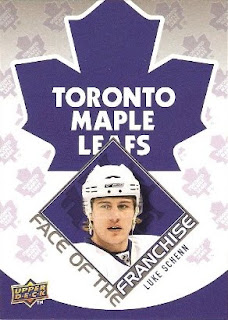 Luke Schenn Face of the Franchise insert. Schenn is one of those players that if you watch him on the right night, looks like a hall-of-famer. Other nights, he looks like me (only not nearly as good-looking). I'm glad my insert was a Leaf. If you want to see another pack rip of this fine set, check out my blog. That's all for now.