Written by TheBrooklynMet at 11:09 PM
The Pack Wrapper: 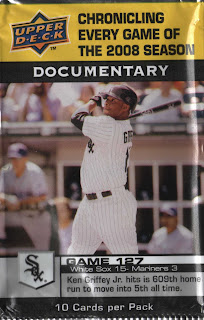 First off, Documentary is currently in the tournament of gimmicks (March Madness Style Bracket) over at Cardboard Junkie, so check that out after reading this post.

The concept: every game of the season gets its own card. Now that is a gimmick to be reckoned with, one not repeated in 2009. Yet, for $1 I decided to pick up this 10 card pack and see the contender in person.

The front of these cards do not seem to bear any meaningful relation to the game itself (which is part of the reason I decided to scan the backs rather than the fronts for each card). Take the right most card below, #4742.

Wow, that is an important game for Gary Sheffield. Who do you think is on the front of the card? Miguel Cabrera in a random fielding photo. How does that make any sense? Anyway, here are some more.

Nine cards down, and one to go. For me this one card in my pack of ten carried the redeeming quality of this set. No it is not even an interesting insert. Here it is: 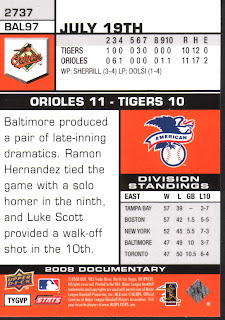 Though it may look unimpressive, I was actually at this game! (If you want proof check out my corresponding blog post).

I kind of like the idea of having a card to go along with my ticket stub. So, here is the front of that same card. It is a nice, relatively clean looking card, but the fact that the photo has nothing to do with the game kind of ruins it a bit. 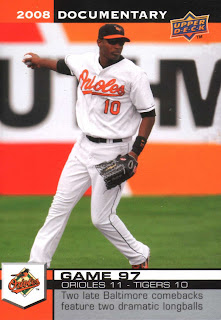 Anyway, because I got this card I felt the pack was worth my $1.