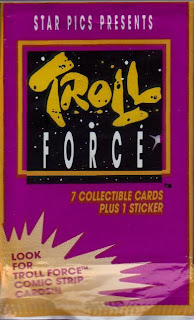 In 1992, Star Pics of Farmington Hills, MI, released a 50-card set featuring some kind of troll-related comic.  There were also 6 stickers to collect.  I don't know how to expound on that. Really.  You are in for something... "Historic." 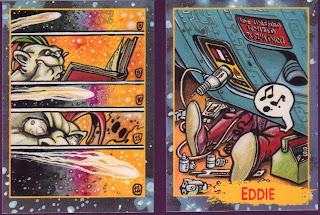 On the left, we have a "comic strip card."  On the back, each pane is painstakingly captioned.  This card features frames 8-12.  The comet on the card is the "comet of goo."  No, I am not making this up.  Eddie is, well, a spaceship mechanic.  His bio says that he "sometimes uses motroll oil as cologne..."  "Historic" does not always mean "good."

Evidently, I am now free to roam the freedom of space! I pulled a "Troll Force Passport," though I admit the photo does not do me justice.  This is the sticker.  Or rather, the BACK of the sticker.  The front features some weird troll head with a crown floating above it and a sword that goes through the crown and the head.  "Hannibal Licker" is next. He is in jail for "saliva abuse."  The third card above is a comic strip card with frames 6 and 7 on it. This is a bit like reading the comic backward, no?  At least now we know the comet of goo is carrying with it the "Breedsville Toy Warehouse."  I don't know if that is good or bad. I just report it.

Ah, frames 1 and 2.  Yes, that is the warehouse.  The story takes place in Breedsville, MI.  The mass of goo has been "hurtling through space in search of....something..." Yes, a direct quote.  "Atom 12" (a play on words from an old TV show, "Adam 12") is in fact a Trollbot.  His partner? "Phat Gut."  I'm not sure I can take much more of this. Seriously.  And, finally, we have... holy craptastic naming conventions, Batman... "Amerrigoround Trollspucci"  Need me to sound that one out for ya?  His claim to fame?  He landed on... oh brother... Kitty Litterboks' TrollNut Shop.  I quit.

A first ballot Hall-of-Shamer, though it's not your fault. In fact, you wrote an admirable amount about this dumpster treasure. Seriously, one taken for the team, here.

Who thought that these would be something people would go out and buy with actual money?