Written by TheBrooklynMet at 8:10 PM 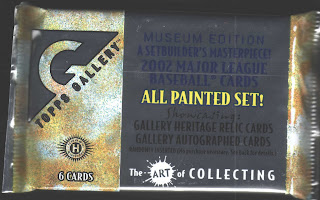 My first post here and the first post in March is on a pack of Topps Gallery from 2002. This particular pack is the fifth I have opened from a sealed box (so far there have not been any hits). I opened this pack with the intention of posting its contents here, and it was a good pack for one without any hits.

Topps Gallery Heritage are seeded 1:12 packs and look like painted versions of current players in old Topps cards sets. In fact, these are like the annual Topps Heritage sets except that the pictures are painted and there are examples from multiple different years inserted into this single set.

Anyway, onto the cards from the actual pack! 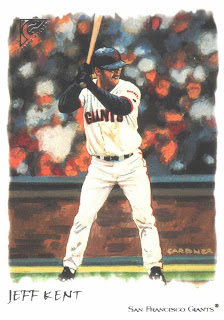 First, my personal favorite from the pack a Jeff Kent card. The black and orange looks nice as a background and in Kent's uniform. The back of the card is interesting too with a month-by-month breakdown of Kent's 2001 statistics, Kent's vitals (height, weight, birthday, etc), a couple of interesting facts about him, and even a blurb about the artist on the bottom. Yet, even with all this information the back looks clean. 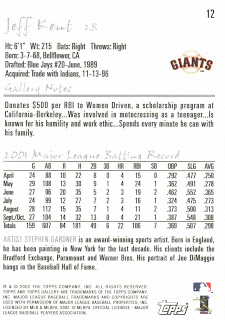 Second was a Pujols card, which would probably be my favorite except for the fact that Mr. Brown, the artist, did not capture Pujols' face in an accurate enough likeness for me. He looks just plain weird, not to mention nothing like Pujols. 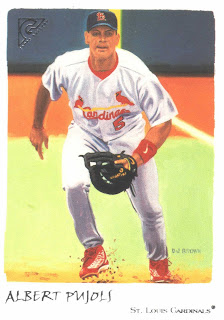 Next comes a Jim Thome card. While Thome is probably near the end of his career, he is the third potential Hall of Famer in this pack. After that, though, lesser players rounded out the pack. 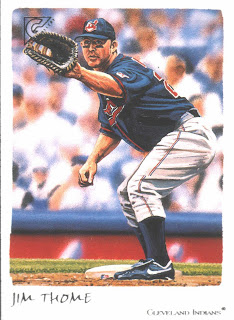 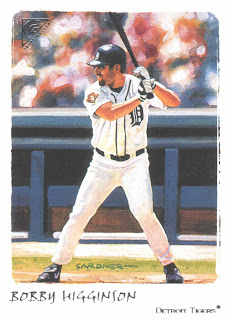 Now Jason Lane, who was supposed to be a solid player (at least) for the Astros, but never really lived up to the hype surrounding him. 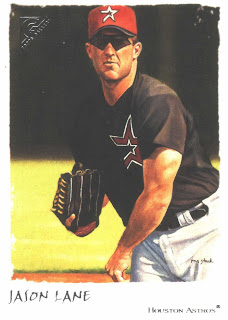 Last is Bud Smith, who I cannot remember at all. Cardinals fans, feel free to fill me in. 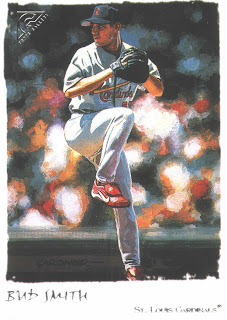 So that is it. The nice thing about this set is that even players I do not know like Bud Smith here have themselves a nice painting. I thought that this was a relatively good pack: how much can one really complain when half the cards in the pack are players that have a realistic shot at Cooperstown?

I can't remember how much these packs went for in 2002, but even if I include the full shipping cost of the box (I got a printing plate shipped in the same package), the packs cost me about $1.46 each. Not too bad for an all painted base set and hopefully some interesting hits in the remaining 19 packs.

Bud Smith threw a no hitter and disappeared.

I was big on the Bud Smith train for a couple years, but that crashed and burned. Same goes for the Josh Towers train I was driving.

The Pujols card looks hideous. I've never been a fan of the Gallery sets, but I do need almost all of the Cardinals from them.

Roy, thanks I'm not sure how I forgot that.

Hey Madding, I'll let you know what Cardinals doubles I get out of my box.

Bud Smith was involved in the trade that netted the Cardinals Scott Rolen. He never pitched for the Phils.

and there is a great anagram for "BUD SMITH" - I will let you work on that for a while.

OMG that's so messed up. XD