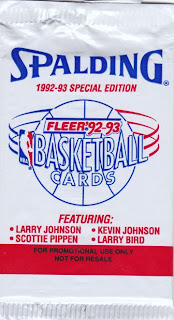 Tonight is the first night of the new NBA season. I don't think it has a catchy name like Opening Day for baseball. The concept of Opening Day seems to be eroding from year to year in MLB anyway. Next season will start in the middle of the week, which is even more weird.
This is some sort of promo pack for Spalding using the 1992-93 Fleer basketball design. None of the cards are numbered, and the wrapper leaves little room for suspense. 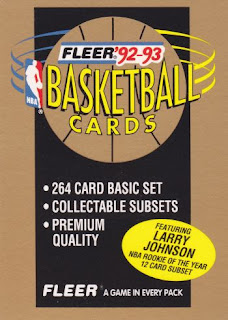 Here's an ad for the main Fleer set itself. I bought a ton of these, as I did pretty much every Fleer set that was released when I was in high school. 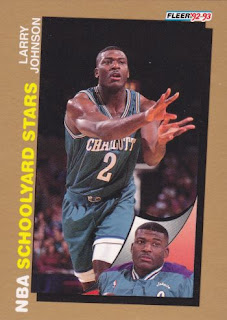 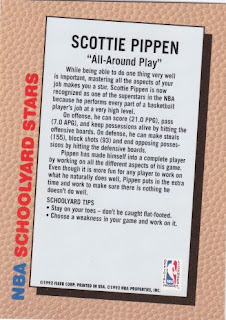 - Scottie Pippen (All of the card designs are from the Schoolyard Stars subset, which makes me think that they were some sort of giveaway for students/young people.) 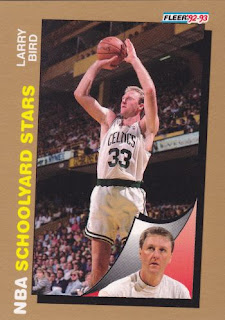 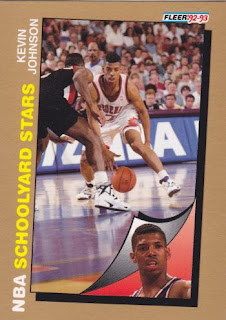 - Kevin Johnson (The mayor of Sacramento. Certain former NBA players take a shine to politics. Wasn't Charles Barkley thinking of running for office awhile back?)
Tonight is the night! I'll be at the Rose Garden in Portland, rooting for the Blazers.

The Charlotte Hornets were huge...at least in Charlotte and the surrounding areas during the time of LJ/Grandmama. Grandmama even teamed up w/ Urkle on an episode of Family Matters!

I miss that era of the NBA - I have a hard time watching now. Something is just different.