1992 Classic Best (The Minors in a Major League Way)

Written by SpastikMooss at 1:28 PM
Old Minor League cards are always fun, since you never know which future stars might be in any given pack. 1992 Classic Best, however, was even more fun to pull, since the cards came in this very fancy pack/box: 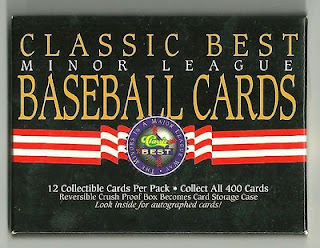 Say what now? And there's a chance for an autograph! Sweet sassy molassey! Let's see them odds: 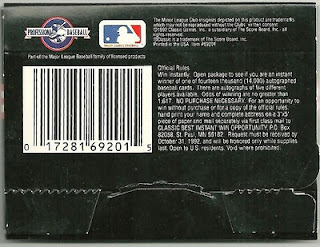 A bit hard to read, but the autos are randomly inserted at a rate no greater than 1:617. It says that the autos are split across 5 subjects and 14,000 cards, but Beckett shows 8 subjects and at least 16,300 cards, so it looks like more cards were inserted later. Nice autos were possible, including Griffey Jr., Mike Schmidt, Nolan Ryan, Chipper Jones, and Carlos Delgado, but I didn't pull any.

That said, the cards themselves are still really cool, so here ya go: 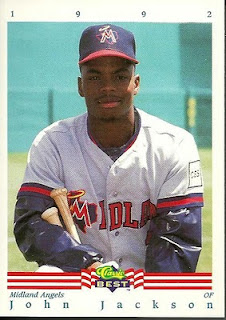 #186 John Jackson - Two sport athlete = nice start to the pack! Mr. Jackson didn't amount to much in baseball, as the furthest he got was AAA during a few seasons despite a .297/.395/.412 career line. But he played 4 years in the NFL with the Cardinals and Bears as a WR/KR/PR, with one reception touchdown in 1992. Jackson now works for ESPN Radio. Here's the back of his card: 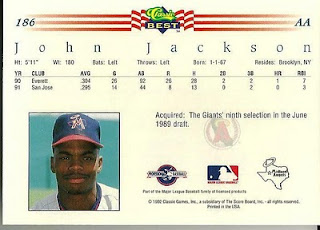 Decent average, but not much pop. That said, any guy who played 2 sports professionally is pretty damn impressive to me, so nicely done J.J.! You also get to see a standard back here - photo, small writing in large space, organizational level in the top right (here: AA), and the logo of his current team in the bottom right. 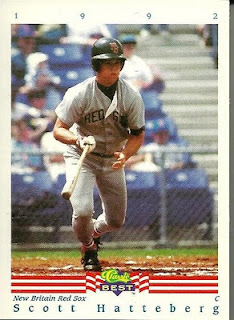 #196 Scott Hatteberg - As a Sox fan, I absolutely love Hatteberg, as the guy took a look of knocks for the Sox as a C/1B/DH type. He actually had a pretty nice 14 year career in the majors, so it was cool to pick up another RC of his here (I already have his 1992 Topps RC). 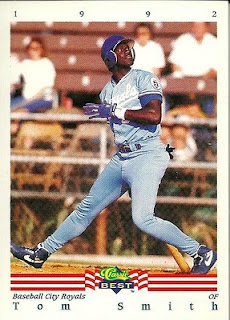 #145 Tom Smith - Tom was real hard to find on Baseball Reference, so I actually had to look him up on their Minor League Index, where he happily existed. Smith's best year was actually 1991 in High A ball, but by 1994 he was out of organized leagues and trying to make it in Independent Ball. He last played in 1998 with the New Jersey Jackals of the Northeast League. 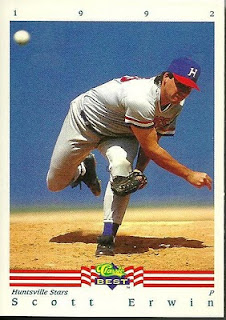 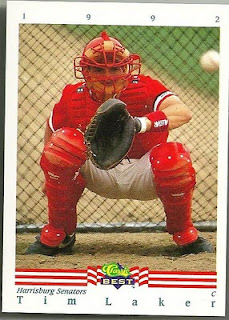 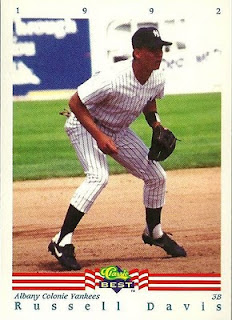 #115 Russell Davis - Somewhere between Mark Reynolds and Chris Davis lies Russell Davis. He had the power to hit some homers, but hit for very low average and OBP and played awful defense. So bad, in fact, that despite the homers, his career WAR was -1.9. And he made over $6 million dollars, so that's pretty sweet. 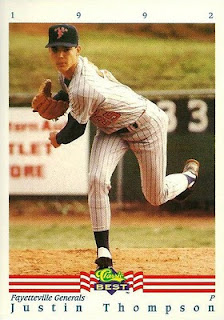 #105 Justin Thompson - If you watched baseball in the mid to late 90's, you knew Justin's name - the guy was supposed to be amazing. He was excellent in the majors in 1997 and 1998, but then he got hurt. 1999 was kind of a wash, and Justin was then out of baseball until an attempted 2005 comeback with the Tigers. 2 games led to a 21.60 ERA, and Justin was done. Which sucks, because he could've been reaaaaal good if he hadn't gotten hurt. 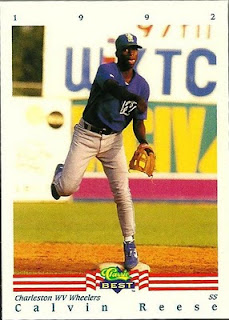 59 Calvin Reese - You know, you often don't know a lot of guys in these minor league set, but that hasn't been the case here, especially with POKEY! I have his 1992 Topps RC as well (like Hatteberg), so this is another case of a nice rookie card to have! 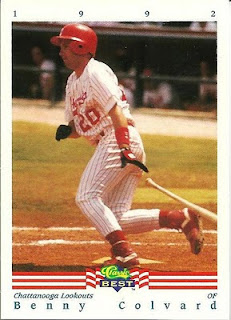 #69 Benny Colvard - And just like that, a guy I've never heard of. He hit quite a few homers but was out of baseball by 1993. Also his real name is Herman. 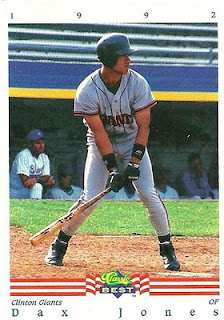 #79 Dax Jones - Wow, what an awesome first name, and his middle name was Xenos, so it's really all good (the name comes from the 1969 film The Adventurers, starring Candice Bergen and Ernest Borgnine). Unfortunately he was sort of Benny Colvard light, with a bit better average but many fewer homers. Dax messed around in the minors until 98, played a year of independent ball in 2000, and then he was done. 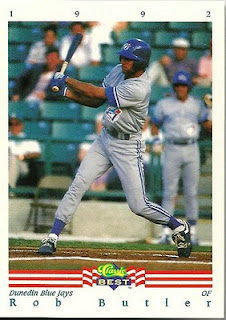 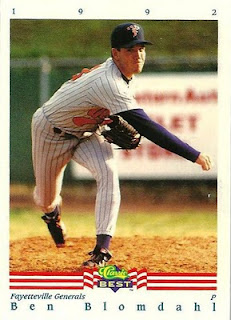 #99 Ben Blomdahl - Final card of the pack, and one year to his major league career: 14 games, 1 save, and a 7.77 ERA. I wonder what it's like having one of a certain stat, like one hit, one error, or one save. Do you play that moment over and over in your head for the rest of your life? I feel like I probably would!

Awesome pack! Didn't know that about Jackson. I thought Rob Butler was a future HOFer back then. Ah, youth...

I loved the first two years of Classic Best. Like their Line Drive/Skybox competition, I always thought these were about as perfect as minor league cards could get. Then Classic had to go and shine up their cards in 1993 in a veritable knockoff of Fleer's 1993 design and just got all hard to shuffle thru and "premium".

Pity they didn't sell all that well, but they were great cards.