Written by SpastikMooss at 2:00 PM
Today we've got some 1993 Donruss Series 2 for you! Not the most exciting set in the world, but as has been noted by other bloggers, it (and 1992) were a nice change of pace following late 80's/early 90's Donruss. One thing that didn't change, however, was the inclusion of Rated Rookies. And this pack had two pretty sweet Rated Rookies within! 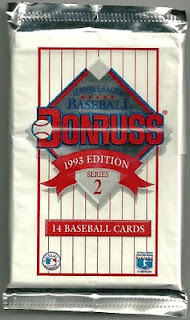 And the back, advertising the Diamond Kings cards. I didn't pull any sadly.

The first card of the back was a nice one though! 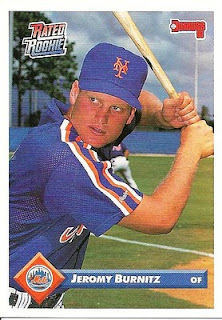 #787 Jeromy Burnitz - Yeaaaaaaah! Burnitz had a pretty decent career in the majors, making one all star game (seemed like more) and hitting 315 homeruns in stops with the Mets, Indians, Brewers, Mets again, Dodgers, Rockies, Cubs, and Pirates. So I think Donruss did okay with this Rated Rookie designation! Here's the back: 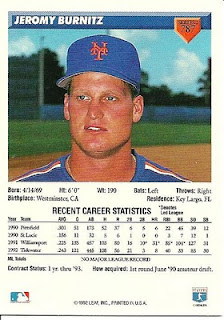 Ah, youth - Burnitz had yet to taste the majors at the time of this card. This shows you the standard back though - picture in the top part, vital stats, career stats, and then the wacky inclusions of "Contract Status" and "How acquired." 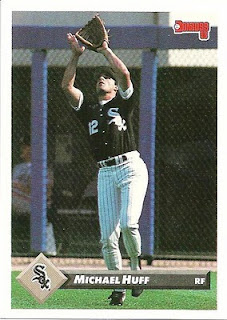 #788 Michael Huff - Not to be confused with the NFL version, Huff was a scrappy 4th OF type who played decent defense with slightly below average offense. He spent 7 seasons in the majors and retired after the 1996 season, which he had spent with the Blue Jays. 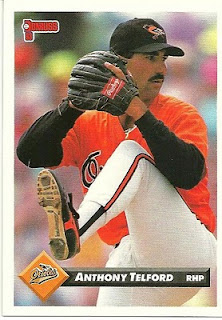 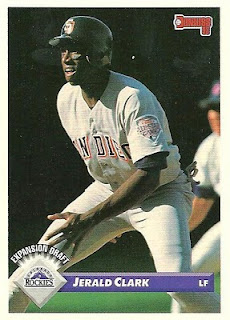 #790 Jerald Clark - Arrrrrgh collation issues, first four cards out of the pack are consecutive. Oh well, the first was real awesome and this one is cool too, as I LOVE expansion draft cards. Say what you will about Expansion (it definitely depletes the talent level in the league which kind of sucks), but I've always liked the idea of new teams. I do not have a good reason why.

Clark, by the way, played the 1993 season with the Rockies (decently I might add), spent 1994 in the minors, played great with the Twins in 1995, and then never saw the majors again. Weird. 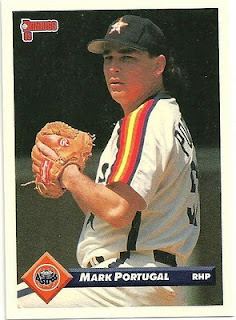 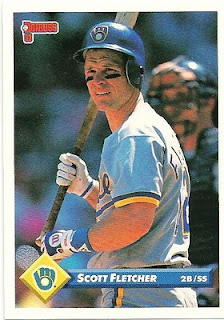 #631 Scott Fletcher - Fletcher was nearing the end of his 15 year career in 1993. Highlights include a 17th place MVP finish in 1986 (the only year he was above 100 OPS+) and some consistently terrific defense at both 2B and SS. 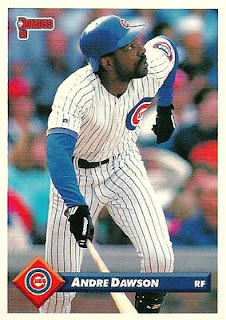 #632 Andre Dawson - NIIIIICE! The Hawk needs no introduction, so I'll just let his picture do the talking. 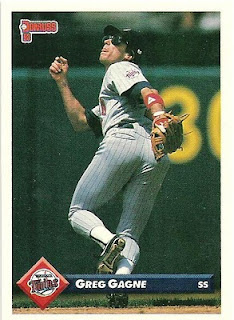 #633 Greg Gagne - His goggles look sweet, and are even better on the back when they're around his neck during the post game. Gagne actually played with the Royals in 1993, so he must've joined them after Donruss produced its set that year. 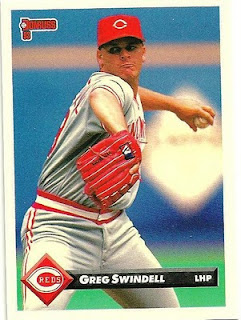 #634 Greg Swindell - Hmmm, another 4 cards in a row by number...craziness. I always actually liked Swindell a lot - never a star, but consistently good enough to keep going out and throwing innings. Over 17 seasons he went 123-122, but picked up an impressive 27.4 WAR and played in the All Star game in 1989. Longevity and durability will do that for a guy, and my hats off to him for a very impressive career. 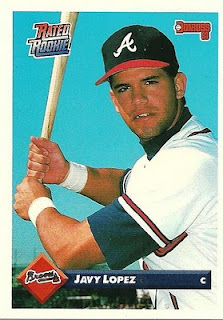 #782 JAVY LOPEZ (!!!) - A favorite of mine as a kid, hence the caps and exclamation points. Javy is known as a terrific offense catcher, and I loved watching him mash homers for Atlanta. 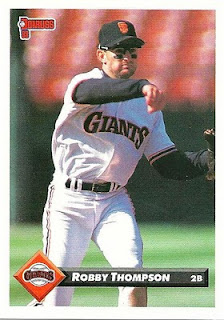 #524 Robby Thompson - Thompson is a guy that I've always underrated...I thought he was no hit/dece glove, but in 11 seasons he was actually decent hit/very good glove. I know I mention WAR a lot, and I know not everyone loves it, but Thompson actually collected 31 WAR over the course of his career, which is way more than I expected. So kudos dude. 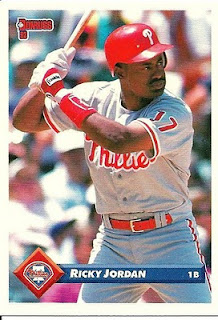 #514 Ricky Jordan - James Loney sort of reminds me of Jordan - looks like he could hit 40 homers a year, but instead he hits for decent average with little power. Hopefully it works better for Loney than it did for Jordan, as Jordan only played 177 games over 3 seasons after this card came out. 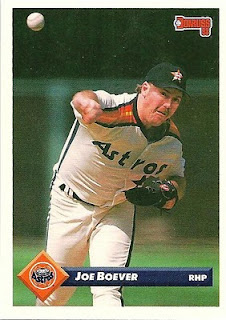 #504 Joe Boever - Is it Bo-ver as in "over," or Bo-ever as in "foe-eva." I'm gonna pronounce it the second way. Joe journeyman'd his way through 12 major league seasons, playing slightly above replacement ball the entire time. Seems like he was a pretty good bullpen arm. 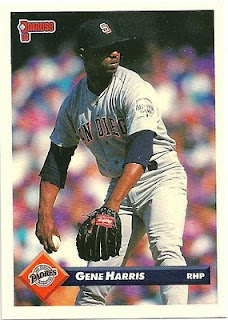 #494 Gene Harris - And the last card out of the pack is the similarly well traveled Gene Harris. Though he played only 7 major league seasons, he played those seasons with 6 teams, including 4 years where he switched teams mid season. The one year they left Harris alone (1993), he responded with 23 saves, 48 games finished, and a 137 ERA+. The next year he was traded though after 13 miserable games, and he'd be out of baseball following the 1995 season.

Another day, another pack down (yeaaah rookies!). Stay tuned for a turn to football in the coming days!

For some reason Boever was pronounced BAY-ver.

I also never understood why Greg Gagne's name was always pronounced GAG-nee, when every other person I've seen with that name had it pronounced GAHN-ya.

I'd note I had the same issue as a kid when I saw Jesus Alou cards as I didn't understand why his name was pronounced "Hey-seus" instead of "Geez-us".

Boever is pronounced Bay-ver, here. It's German and pronounced slightly different there. Don't worry about messing it up, everyone does.