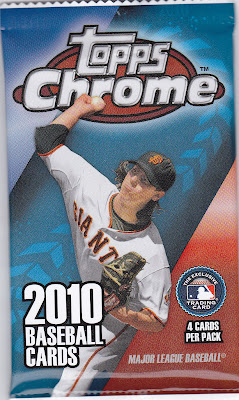 I can't believe I'm the first person to post a pack of 2010 Topps Chrome on this here blog. Come on, guys! I'm the collector who is always BEHIND the times. I like movies from the '70s! I still consider batting average a usable statistic! People my age have a general aversion to rap music!

I should not be the one debuting an ultra modern card set on APTBNL!

But, fine, I'll blaze territory for you.

This pack was actually extracted from one of those rack value packs. Each $8.99 value pack contains three individual four-card packs of shiny chrome and three orange refractors, which are separately wrapped from the individual packs.

I rather like these value packs, but I would buy even more of them if Topps made it a real value and bumped the price down about a dollar.

Anyway, here are your four cards from the pack: 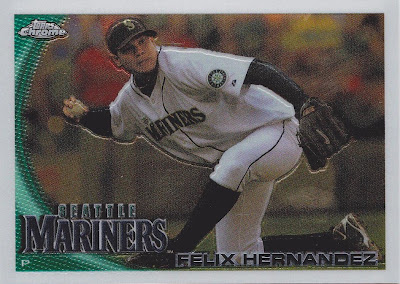 Felix Hernandez: I'm calling it here and saying Hernandez beats out Sabathia and Price for the Cy Young Award. It's entirely possible I'm wrong, but I think enough writers have seen the light and don't rely solely on wins to choose the best pitcher in the land. 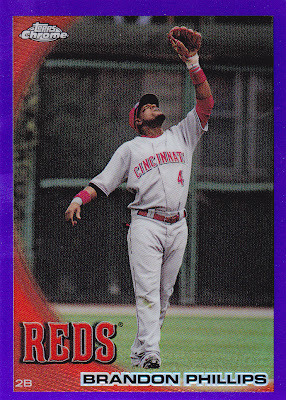 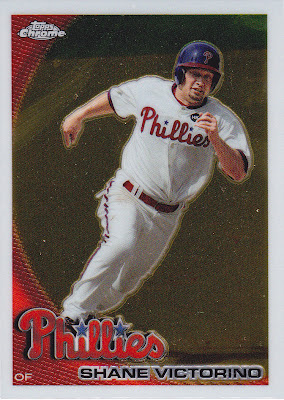 Shane Victorino: The Flyin' Hawaiian had a tough postseason. In general, the Phillies hit .216 as a team against the Giants. The Phillies have now disappointed me three postseasons in a row. Not good. 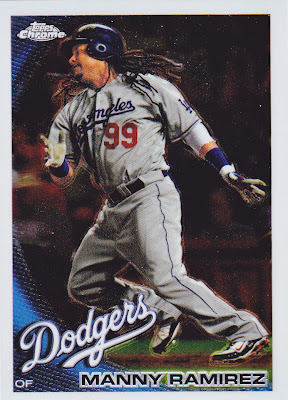 Manny Ramirez: Hey! It's an Ex-Dodger! I instinctively went to look up who the Dodgers got from the White Sox for Ramirez.

OK, lads and lasses, there's your official APTBNL Chrome pack. But I'm done with the pioneering stuff. When Topps Update comes out, someone else is going to have to do it.

For some reason, I never managed to get that excited about Topps Chrome... I usually skip it entirely.

This year, I'll have to pick up a few cards, though - they've actually got some cards that are unique to the set instead of being rehashes from the flagship.

Well...you were right about one thing...Phillips does have a big mouth.

What? No Rangers in a 4 card pack? That was awful.

I would demand my money back. Brandon Phillips is the worst. Please actually provide some evidence of the Cardinals "whining" if you are interested in changing my opinion.

I could write a 5-page paper on Tony La Russa's whining. He is the whine leader. Whining about newspaper columnists. Whining about comments made by former players. Whining about ballparks. The entire 2004 World Series was a Cardinals whine-fest. When I think about it, he even whined to me when I interviewed him.

Sometimes that can filter down to the players, too.

I like the Cardinals. But their manager needs to zip it sometimes.