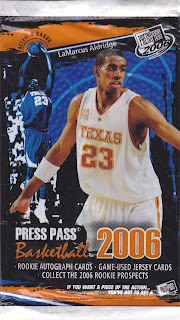 Before I start, let me just say that it doesn't make a whole lot of sense when you buy a pack and every single card is a completely different design. And out of all of those designs, well, I can't exactly say I'm positive which design is the base design? Is there a base design? I'm going to go with the one that doesn't have a prefix or suffix in the card number and is not serial-numbered. I know plenty about the NBA, but I know absolutely nothing about college-based packs. I believe this came in a repack box and has beloved Blazer (okay, well, I happen to like him a lot at least) LaMarcus Aldridge on the pack wrapper so it can't be all bad, right? 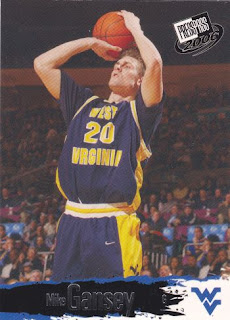 16 - Mike Gansey (Gansey was undrafted but appears to have logged some preseason time with the Miami Heat at some point, or at least went to a camp with him. He played in the D-League a bit and appears to be headed overseas this year. I wouldn't bet my life on it, but I think this might be the base card. Maybe.) 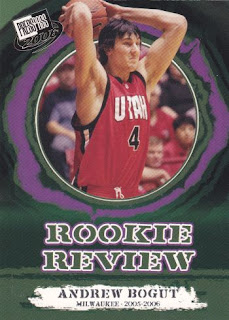 41 - Andrew Bogut Rookie Review (Bogut was finally living up to some of his potential and #1 overall pick status last season when he suffered a gruesome injury. I won't even Google it for your reference and I wouldn't if I were you.) 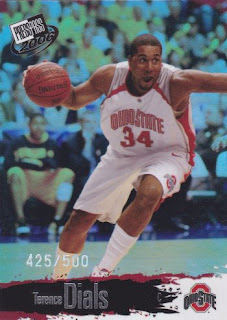 R14 - Terence Dials [Something Shiny?] 425/500 (I have no idea what this parallel/insert/shiny refractory looking thing is. Dials had the misfortune of being born with one less 'R' in his name than the other kids, but he overcame the odds to become the Big Ten Player of the Year in 2005-06. He, like Gansey, went undrafted. Dials has played in Europe his entire pro career. I'll probably send this to Too Many Grandersons if he ever gets on my bad side.) 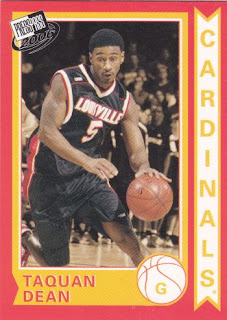 OS 11/25 - Taquan Dean Old School (No, this wasn't a contest entry in an attempt to make the most hideous looking homemade card. This was actually a fairly brilliant effort into making a modern day card look like a cheap, crappy college basketball knockoff from the late '80s/early '90s and turn it into an insert set. Taquan Dean, if his Wikipedia entry is to be believed, was a lock to be a 1st round NBA pick if he had come out after his junior season but ended up injured and undrafted the next year instead. Sad stuff.)