Written by Community Gum at 1:09 AM
I got distracted for a little bit, but I'm back with another pack from my Community Break held a little while ago. I opened 2 whole boxes of 2002 Topps Total, which still wouldn't have been enough for a complete set, even without duplicates. Let's see what the fuss is about, shall we? 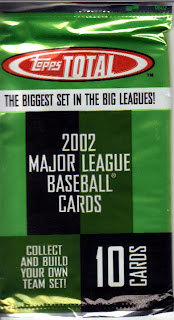 It says 10 cards per pack, but it really means 11, because you get a checklist in every pack, and most of the time it's a team checklist featuring a player on the front. Let's build a set! 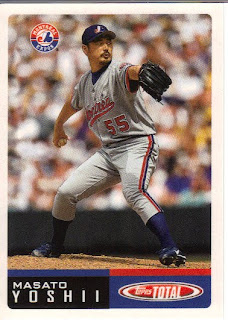 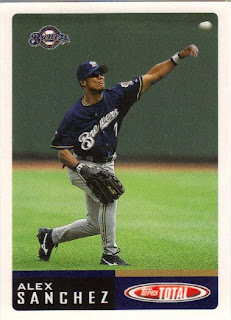 #502 (MIL10) - Alex Sanchez - in 2005, Sanchez became the first player to be caught violating MLB's stricter steroid abuse policy. He had 4 career home runs over 4 years. After 2005, Sanchez bounced around in the minors a lot. 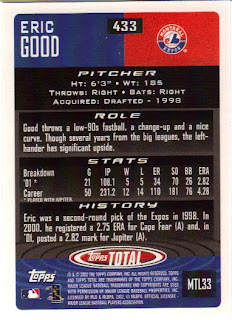 #433 (MTL33) - Eric Good - As you can see the card has two numbers, one is the Total set number and then the team specific number. I like the different sections provided on the back, but only one year of stats hurts a little bit considering they could have smushed the top section into two lines to make room for more.
According to baseball-reference, Good never made the majors, so I guess they included prospects in here, too. Great...an Expos prospect... 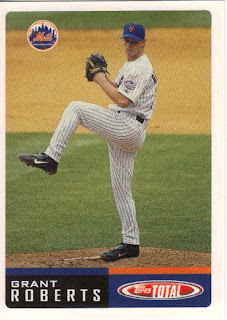 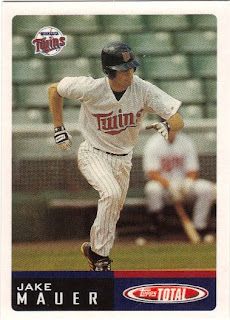 #314 (MIN34) - Jake Mauer - Mauer...Mauer...... Jake never made it to the big leagues and had to retire in 2005 due to injuries. He went on to manage in the minors and was named the Gulf Coast League manager of the year. He is now managing Fort Myers High A ball. 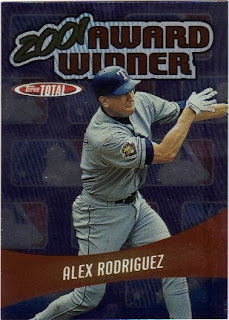 #AW10 - Alex Rodriguez - 2001 Award Winner - Not every pack has an insert, but most of them do. This card commemorates his Silver Slugger win. Exciting shiny MLB wallpaper action! 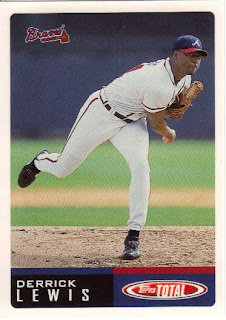 #461 (ATL16) - Derrick Lewis - Not only did this guy not make the majors, but he had Tommy John's surgery in 2001 and he wasn't expected to pitch until mid '02. I think this is taking "Total" a little too far. I would expect to see players who actually played for the team. By including all these non-MLB prospects, you're actually taking away from the totality of the 25 man rosters and all the rookies that got their cup of coffee the year before in September. 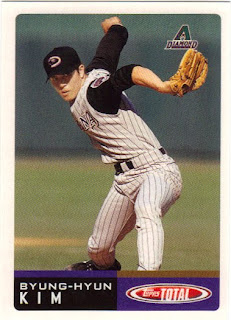 #666 (ARZ19) - Byung-Hyun Kim - For a short while, Kim was a dominant closer, but he almost blew it for the D-Backs in the World Series. He also won a ring with the '04 Red Sox. Maybe the Cubs should look into having this guy around. 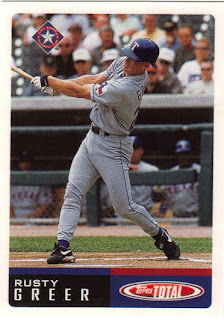 #88 (TEX7) - Rusty Greer - Rusty's last year in the bigs was 2002. He left with a career AVG of .305 after playing one game that season. His all-out hustle made him a fan favorite in Texas (and the diving catch he made to save Kenny Rogers' perfect game didn't hurt, either). 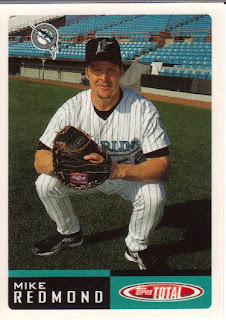 #77 (FLA1) - Mike Redmond - The recently retired Redmond is a name I recognize more so than the primary catchers on his teams (Mauer....Mauer......). He's the least error-prone catcher amongst current active players as well. Probably just about the best back-up catcher you could hope for. 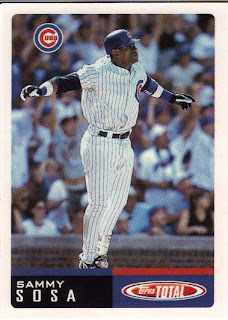 #TTC6 of 30 - Sammy Sosa - Based on the crowd's reaction, Sammy got this one right and it's gone instead of being a double off the top of the wall. This here is one of the team checklists. The picture on the front is the same as his normal card, but there is no gloss and the back lists all the players on the team in team card order. It's just as exciting as it sounds.
Honestly, after breaking all of this stuff, I can't say I'm a fan. I don't see the appeal. I want a low-budget set that doesn't look like the flagship without foil, but I don't want a set full of busts (and prospects in a non-Bowman product) that will take 3-4 boxes worth of cards to complete. That's no longer budget. If you do want some of these cards, let me know, because I have a ton left to trade.

Rusty was definitely one of my favorites. All hustle, all the time.

I would love any of the Cardinals that you have. Topps Total got better over the next couple of years. They ditched the gloss and the inserts, and prospects/minor leaguers were doubled up so they would share a card.

1) team collectors, who enjoyed getting cards of the folks that weren't superstars on their team.

2) autograph collectors, who were happy to have the cards to get signed.

If you didn't fall into one of those groups, you probably had about as much use for Topps Total as you did for Opening Day. Probably explains why they don't make it any more, unfortunately.