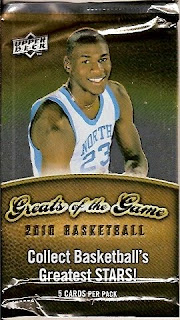 Saw a pack of these at Dollartree and decided to check them out. With NCAA license in their hands they decided to use photographs from the players NCAA days. Unfortunately ALL the photos used was black and white. I can understand the use of b/w photos around the 50-70s but for players around for the 80s-90s?

Here what I got. 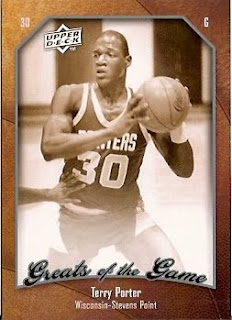 Terry Porter - despite playing for D-III school he was one 72 players on 1984 US Olympic team trials and selected 24th overall by the Portland Trail Blazers where he was had a very underrated 17-year NBA career. The shot looks to be during practice. 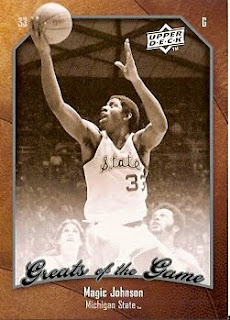 Magic Johnson - now here's a good one of Magic laying the ball up. Few time b/w shots work on cards. He would go on a memorable NBA career and a successful business man after the NBA. 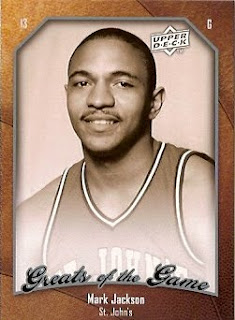 Mark Jackson - instead a on-court practice/action shot I get a b/w portrait shot of Mark Jackson. I'm sure color is widely available in the 80s. It's like the photo been lifted off a yearbook. 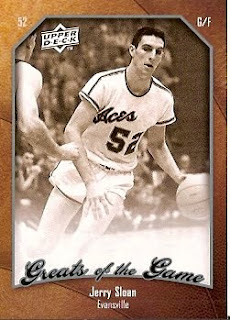 Jerry Sloan - the longest tenure (and successful) coach with the current franchise, not only the NBA, but all of sports. He was leading scorer in three years at Evansville and selected 6th overall by the Washington Bullets (now Wizards). Bulls would pick him up in an expansion draft and become a star player with the team. Good b/w shot. 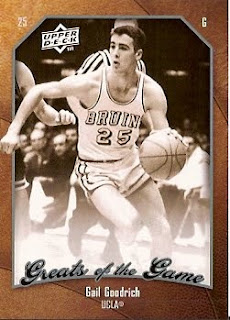 Gail Goodrich - another good b/w in-action shot. The all-time leading scorer at UCLA who help started UCLA dynasty run in the mid-60s. He had a successful NBA career and now working as a TV analyst on NBATV.

Email ThisBlogThis!Share to TwitterShare to FacebookShare to Pinterest
Labels: 2010 Upper Deck Basketball Greats of the Game

You're right, not a bad pack for a buck. I've seen these too, but have resisted from buying any so thanks for feeding my curiosity!

They almost look more like they've been through a sepia tone filter rather than appearing straight black and white, at least according to the scans.

It makes for a nice dodge, to make the set look all old-timey by changing the tone slightly of the actual b&w images, and then taking the color out of the rest so the set looks uniform and complete.

It is also possible that up through at least the mid-90s that film was still being used, and b&w may have been a good portion of that. If some of these are pictures take by a school newspaper photographer, then they're not necessarily going to be color.

I love the Terry Porter card!