Written by Johngy at 1:21 PM
I usually write about meeting celebrities, but I also have a ton of cards in a closet. If that isn't enough, my favorite card store, AU Sports, has a box of random packs for 50 cents. I relayed this to Matt and he agreed to let me contribute.
For my first pack, I selected a pack of 1991 Topps American Gladiators cards. These were from the original American Gladiators tv show. They are a bit cheesy, but they are a throwback to the old days of card collecting, before slick graphics, glossy finishes and digital photography. 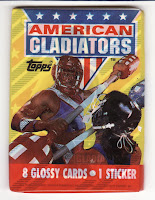 #67 Nitro-One of the most popular Gladiators, Nitro eventually joined the hosting crew on the show. Dan Clark played 2 years in the NFL pre-AG and did some acting post-AG.

#44 The Hosts-Hosts Mike Adamle and Larry Czonka are shown interviewing Nitro and Gemini. Adamle and Csonka were the third and longest-lasting AG announcing team.

#75 Zap-Zap was on AG through most of the original series run. Raye Hollitt was a bodybuilder, fitness model and actress. At one point, she benchpressed 310 pounds.

#21 Atlasphere-This is a great shot of the Atlasphere game, one of the sillier contests on AG.

#31 The Joust-I loved the Joust. The competitor and the Gladiator do battle with 2 giant Qtips (Pugil Sticks, if you want to get technical). You can barely see what is happening on this card.

#66 Gemini-Gemini was one of the original Gladiators, appearing from 1989-92. I don't know much about Michael Horton, although he seemed like a big guy back then.

#6 Zap sticker-This is a nice action shot of Zap nailing a contestant. Too bad the card design is dizzying.

Back in the pre-internet days, sets like these were especially cool. These cards were the best way to get pictures of the Gladiators and the contests.

I think the joust was always the best part of the whole show. Man, those ladies sure had some big.... hair!

It's so funny to see how cutting-edge the outfits seemed to be at the time.

That spandex now seems just too unitard-y and out of place, just like sprayed-out hair in an athletic competition. Wouldn't that be considered an unfair advantage for the Gladiators these days?

"What happened out there, Becky?"

"Well, I started out OK, but after that first tackle from Pez, I got a fat dose of Aqua Net, and then I felt the blackness surround me not long after."