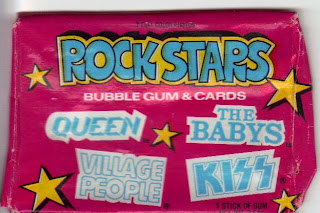 Queen.... KISS... The Village People? Ah, yes, when you think about late-70's/early 80's Rock-N-Roll, you think... Village People. Or so Donruss hoped thirty years ago with this little gem of a pack.

For those about to puke, we salute you:

Yes, you see that gum? It is FUSED to the card. Go on, take a nice close look. The stain surrounds the gum on the card, forming some kind of bonding strip.

The cards feature publicity shots and in-concert photos. Judging by the copyright by-lines on each card, the photos were actually provided by the management team of each group. Heck, Donruss didn't even have to send photogs to the concerts!

The backs of the cards either show a piece of some puzzle (or puzzles) you are supposed to build, or (as in the case of the gum-laden piece above) they have information regarding the photo on the front. I can't resist printing the copy from the back of Gene Simmons' card (first card in this post, left side):

Gene Simmons, seven-plus feet of fire-breathing, blood-dripping, bass-pounding terror, was one half of the duo who originally conceived the spectacle of KISS in 1973. He portrays the tongue-thrusting demon of the band, with wings painted over his eyes, his laced-up bodysuit choked with chains.

Whether he's on or offstage, Gene's role in KISS suits him as well as do his towering boots. He owns an awesome group of rings, buckles and bracelets sporting insects and spiders. An avid fan of horror and fantasy films, Gene even once belonged to the Count Dracula Society. He now satisfies his vampire urges in the KISS show, as well as by viewing his favorite classic films on a video tape system at home.

I may get beaten with a stick for this... but I will be a metal-head until the day I die, but I just don't like KISS. I never have and I never will.

I dated a girl in college who was a KISS and Motley Crue fanatic. I tried to teach her the ways of death, doom and black metal, but never could get her to see the light.

At least she liked Iron Maiden.

KISS started out as a rock band, at least in my opinion, but led astray by the powers that be which made them turn into pop-rock gibberish... It's too bad.