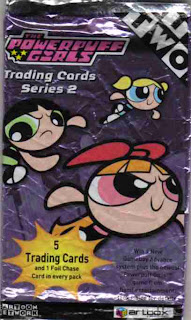 I'll admit it, I like the Powerpuff Girls. I find the concept highly amusing. Cute, sweet little girly girls who are actually lab-created crime fighting superheroes that beat up their enemies with such horrifically ultraviolent over the top tactics that would make the dude from Oldboy blanche. I mean, they were originally called The Whoopass Girls for Pete's sake. Craig McCracken is a talented dude, I like his quirky art style. I don't usually go for non- sports card, but this was in the 99c box at Target so I decided to give it a go. 5 trading cards and 1 foil chase card in every pack! I checked the back of the wrapper and there are 72 cards and 12 foils in the set. Do the math and that means the 'chase' cards are actually easier to pull than the base cards. Oh, well, they shiny so who cares. 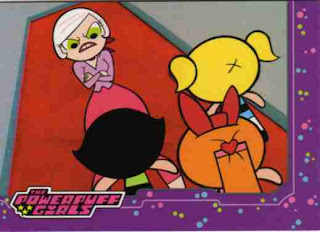 I vaguely remember this episode (has this show been on the air in the past five years?). This mean looking lady with the huge hips seduces the Professor and becomes the Girls' mommy so she can keep them from fighting crime, especially the crimes she commits. Whoopass ensues. 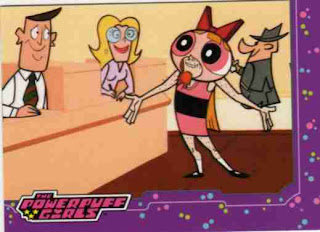 In a show that has some very disturbing artistic choices (eg. the Mayor's bombshell secretary whose face is always cut out of the frame) old hairy guys dressing up as little girls is waaay up there on the list. And where the hell are that dude's legs?! 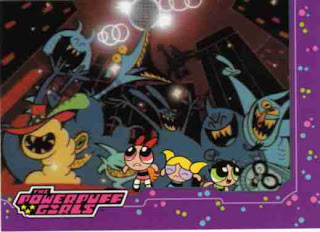 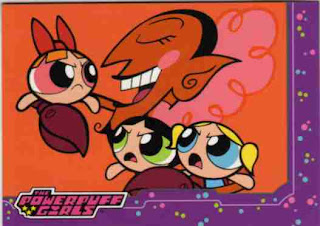 Argh, I hate this guy! Him is my least favorite villain in the show. I hate his face, I hate his voice, I hate his clothes, I hate his lobster claws, I can't watch this guy. Apparently McCracken based Him on the Chief Blue Meanie from Yellow Submarine, and now that I think about it, I can totally see that. I still don't like Him. 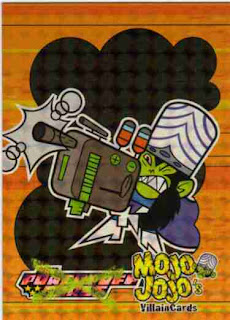 Yesssssssss! My favorite villain! How can anyone not love an evil Japanese mad scientist monkey madman! This pack = WIN. 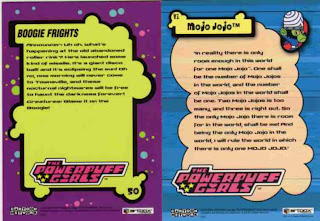 Here's the back of the cards just for reference. As far as I know this is the only reference on the web for Artbox Powerpuff Girls cards, so I may as well be thorough about it. Unfortunately I have no clue what year these cards were made so it will always be lacking. Oh well, I'll just blame it on the boogie.

Note - Thanks to MDA for letting me know the date for this set!

I'm a fan of both Powerpuff Girls and McCracken's next cartoon, Foster's Home For Imaginary Friends. One of the regulars is supposed to be Michael Jordan's imaginary friend (or at least a character based on Jordan) so it is even slightly sports related.

The art style is great. Similar to Stephen Silver who did Kim Possible.

Epic pull on the Mojo Jojo.
I'm tempted to buy a couple of packs for my daughter. Well, at least she can have the non-Jojos.

MOJO-JOJO!! That alone puts it into the Hall of Fame!! Offy, I am a HUGE fan of Foster's Home! My favorite episode of all time: Hot in Topeka! (Probably not the real title, but you know exactly what I'm talkin about)

One night when I was in grad school I had just finished my nightly snack of a pint of Jagermeister when Powerpuff Girls came on.

My room mate was in the bathroom brushing his teeth and I was nearing blackout on the living room floor when they started introducing the characters.

Things were going along nicely and then I yelled out, "Did they just say Thundercunt?" My room mate, who wasn't nearly as drunk as I was, started laughing really loud and came out of the bathroom with toothpaste all over himself and a wet spot on the front of his panths.

"No, her name is Buttercup."

When I yelled Thundercunt he laughed so hard he spit his toothpaste all over the mirror, and then wet himself.