Written by Joe S. at 12:04 AM
I recently found the greatest card shop ever. I googled "card shop San Diego" with the hopes of finding a place that sold 5,000 count card storage boxes. I found one that I apparently drove by almost every day yet somehow never knew existed - it was tucked away in one of those office parks with just a small store front sign that said, simply, "Baseball Cards". I had called ahead to make sure they had the storage boxes - they did. I walked in to the store and my jaw dropped upon the site of a giant table of old unopened boxes starting at $10 and old packs starting at just a buck!!

I picked up a pack of 1995 Sport Flix - enjoy it as my first contribution to A Pack To Te Named Later.

I think that's a silhouette of Don Mattingly: 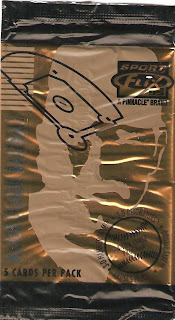 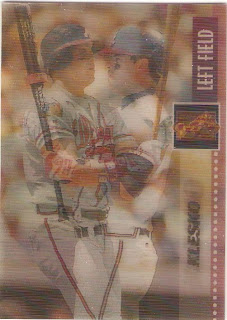 #161 Alex Gonzalez. It claims to be a rookie card, but I'm not sure if it actually is or not. Probably not worth the effort to find out. The rainbow background is much brighter in person. 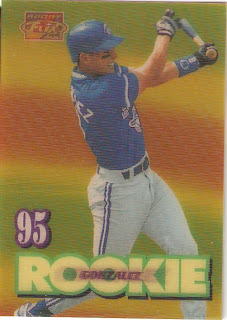 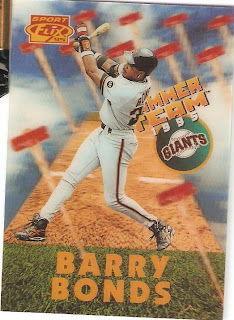 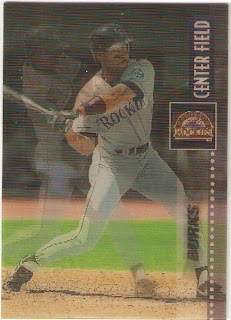 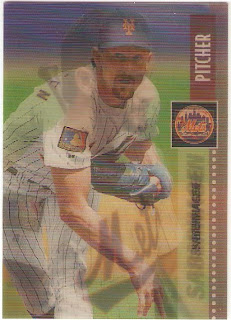 Not a bad way to spend $1. It certainly beats Upper Deck First Edition or Topps Opening Day. I wasn't sure how scans of Sport Flix would turn out, but they seemed to have captured both images on the card. This won't be the last pack of Sport Flix I'll be purchasing.

Wow. I'm still fixated on the wrapper. Trying to figure it out...

Thanks! I was pumped when I found it. Only 5 cards per pack seemed low for the year, but considering there were two pictures on each card (sort of), it seemed worth it.

Where is the shop? I need a card fix.

PunkRock - it's in Santee, called All Star Cards. It's off Cuyamaca, before Mission Gorge Rd. Good stuff... don't steal my cheap wax!

The top card looks like he is doing it with himself.
LOL