Written by Motherscratcher at 8:30 AM
Around 90 or so posts into this new blog I've decided that it's high time to pop my APTBNL cherry. There's only so many times I can come here and in good conscience be hailed as a contributor without having actually contributed anything. Whether I will have contributed anything even after I post this is doubtful, but I'll give it the old college try.

I came across this pack of Bazooka today while continuing in vain to keep my little card collecting corner of our home office neat and tidy. I have no idea where it came from. 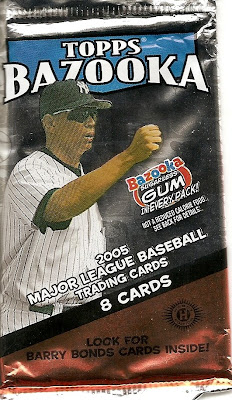 Here we see the shiny pack that it comes in. Very sharp. Every pack contains Bazooka sugarless gum. Sadly, this is not a reduced calorie food. There is information on the back for those with questions about this development. The whole thing seems pretty straight forward to me so I will move along.

At the bottom there is a command to "LOOK FOR BARRY BONDS CARDS INSIDE!" As I have a healthy respect for authority I intend to do just that. 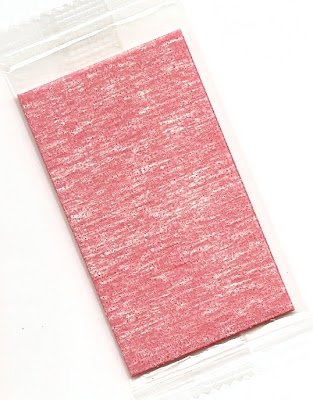 Here's the gum. Now that you've seen it I will chew it as I write this post. 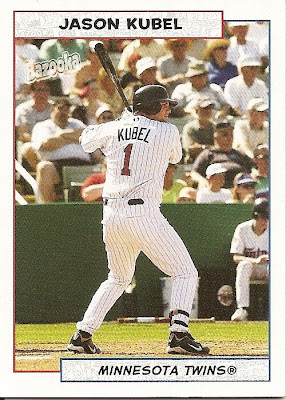 Just some fella named named Jason Kubel. Kubel's pretty decent so not too shabby to start. 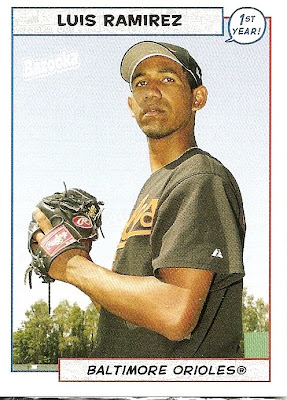 Just some fella named Luis Ramirez. From what I can tell 2005 is the only year that Ramirez played baseball. From the back of the card: "Ramirez only throws in the upper 80's, but he racks up the strikeouts due to his incredible late explosion." I was wondering if there was anyone out the that knows what that means. Late Explosion? I guess it wasn't late enough or explody enough. 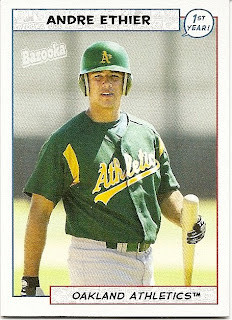 Just some fella named Andre Ethier. I don't think they should call these minis. This is bigger than all of the other minis that I have. Maybe we should call these Jumbo Minis or something. I think that is just dumb enough to catch on. 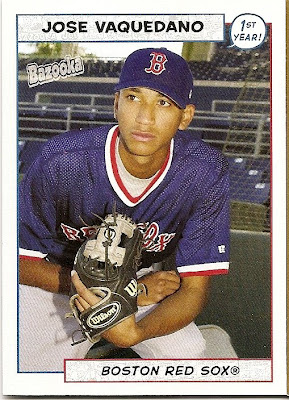 Just some fella named Jose Vaquedano. Jose hopes to become the first player from Honduras to reach the majors. Not there yet. 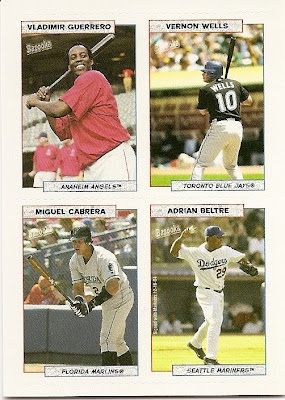 Not Barry Bonds Checklist Sticker #1 of 12

This comes with 4 seperate stickers of Guerrero, Wells, Cabrera, and Beltre. Actually this thing is kind of cool. I like stickers, even if I never peel them off any more. Maybe I'll do that. When I get a bad card I'll peel one of these stickers and make it better. 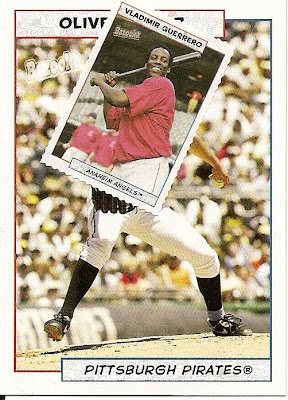 Just some fella named Olivladimir Guerrero. See. Told you so. Makes a stinker of a Pittburgh Pirate into a Hall of Famer. 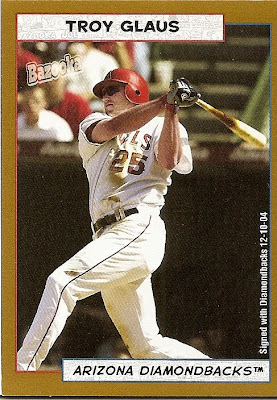 Just some fella named Troy Glaus. Isn't that delightful? This isn't a gold parallel. No. This is a Gold Chunk. Collect them all.

Remember those square candybar things that always looked good because they were in shiny silver wrappers? They looked better than they ever really were. Weren't those called Chunkys? Whatever happened to those? 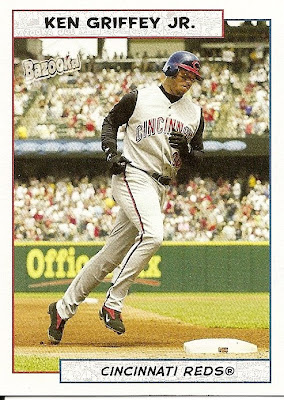 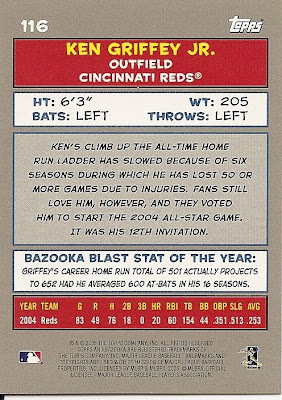 Just some fella named KEN GRIFFEY JR!!! Sweet card. So good that you deserve a look of the front AND the back. Jr obviously is in the middle of one of his many home run trots throughout his career. The back extrapolates that he would have had 652 HRs by 2005 if he had gotten 600 ABs a season instead of being hurt so much. Yeah, well, it my aunt had balls she'd be my uncle.

Still, nice card. Not a bad pack. And no Barry Bonds either. Not that I particularly want a Barry Bonds, but that's what they told me to look for. Now I feel like that kid playing football with the older boys and gets told to go deep. No keep going. Keep going. Farther. Keep going...We've all been that kid before.

Oh, and here's the gum I chewed to prove to you that I did it and I'm not some stinking liar who says he is going to chew gum and then doesn't do it. I hate those guys. Bunch of jerks if you ask me.

I was kind of hoping for a Jesus or maybe a Blessed Virgin Mary. Those seem to be the biggest sellers on the bay, although I'm not sure if a piece of Bazooka gum would get as much as a grilled cheese. I guess it doesn't matter either way because I ended up with Julian Tavarez.

The gum in its pre-chewed state looks like fiberglass insulation.

And by the way, I always loved Chunky bars. A few years ago we found them at a gas station in Tennessee, along with that old crappy orange flavored Mountain Dew.