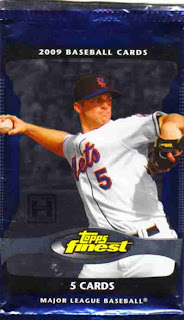 I used this pack as my inaugural YouTube post, why not use it as my first one on here as well? I found this pack loose at the flea market and it didn't cost me too much more than a hobby pack of Upper Deck. I thought the hit had been picked out of the open box already, but it looks like I had good luck that day. I've said it before, but I am pleasantly surprised at how good these cards scan considering that they are chrome. 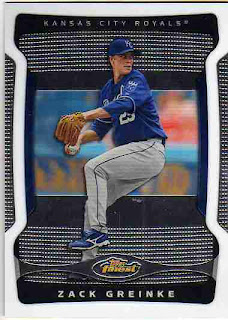 Man I wash the Braves had been able to pawn off Jeff Francoeur to the Royals for Greinke a couple of years ago. That would have been the ultimate "buy low, sell high" trade for the Bravos. 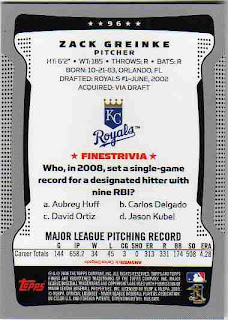 Here's what Finest backs look like. The trivia is pretty much the only interesting thing about them. 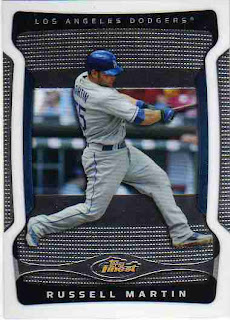 McCann can barely see and he's STILL twice the catcher Martin is! 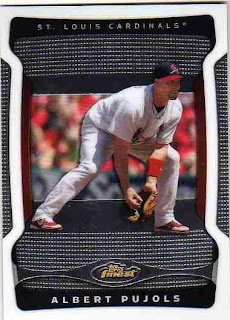 You know how whenever a legendary player dies, the first thing ESPN says is that now player X is the Greatest Living Ballplayer? Like when Dimaggio passed, it was Mickey Mantle and when he died it became Ted Williams and when Ted's head got frozen it was then a coin flip between Mays and Aaron? Well Albert Pujols is now officially The Greatest Active Ballplayer That Hasn't Gotten Caught With The Juice. Let's hope it stays that way. 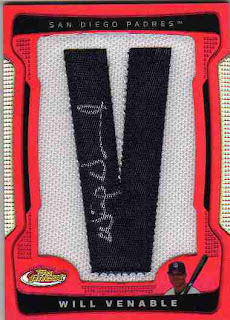 Before this year I has no letter patch cards at all and now even with severely curtailed pack buying habits I've got three of 'em. Will Venable, Roger Staubach and Franklin Pierce. What a bizzare hobby this is. 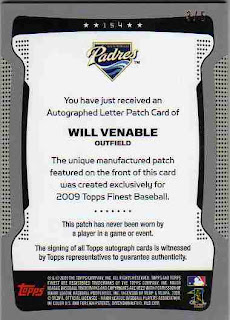 If you look closely up at the top right corner you can see the 3/5 serial number. Now don't get me wrong, the patch is nice, and the refractor is purdy, and it's a low serial number and all, but how excited can I really get over a strange looking autograph card of a guy who can't break the Padres' lineup? Maybe I'm just an ungrateful lout. 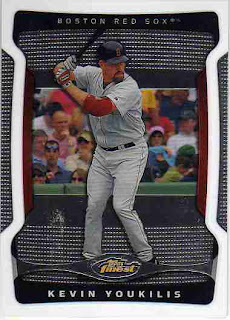 If you check out the video I did of the pack rip, you'll see that I not only flaked out and butchered Youk's name, but I also probably pissed off all the Moneyball devotees as awell. One thing that annoys me about the back is that they only have career stat totals and none from 2008. I looked on the back and saw that Kevin has 66 homers and thought "66 homers last year?? how'd I miss THAT?"

Nice pack here, I got a great hit of a meh player as well as a couple of stars and the 2009 AL Cy Young and NL MVP winners. I probably wouldn't have been happy if I shelled out 50 bucks for a mini box and had this be the best pack though.

You just do that Martin-McCann comparison stuff just to get me to respond don't you?

No, because it is Gospel Truth.