Written by Community Gum at 10:59 AM
It’s time for another adventure from the depths of the non-sport archive. I haven't done this on here in a while. From the back of the pack, I see that someone in my family bought this for $0.40 at the great comic shop Tomorrow is Yesterday (since renamed due to legal issues and new ownership). I don’t know how many cards to expect, but one can guess that I will not make this money back unless I pull one of those autographed cards. How X-citing! (Yup, this is going to be the theme for this pack break.) Let’s X-cavate! 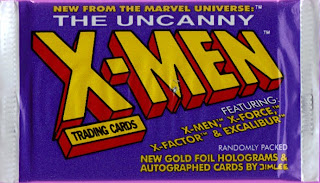 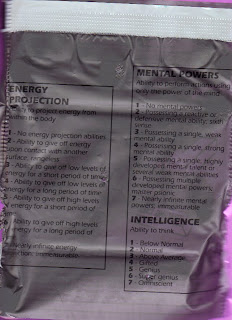 It comes with a powers guide on the inside of the packs. Better keep this handy. 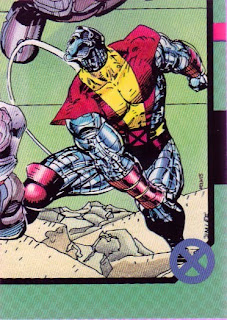 #99 – Danger Room Test Sequence #9: Colossus – As you might be able to X-tract from the border, this is a “puzzle” card. If you collect all 9 (and you should), you can Voltron together the Danger Room scene. 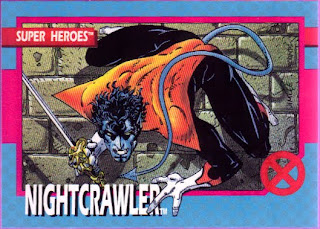 #6 – Nightcrawler – Hells, yeah! This was both my brother’s favorite X-Men character and mine. Rarely did we agree on these things, so you know he has to be the best. He’s so cool, not even the card frame can contain him. He’s teleporting everywhere. I’m X-static! 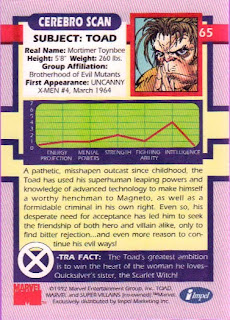 #65 – Toad – I’m sorry, but Toad is really lame. Whether you’re talking about Super Mario Bros. or X-Men, characters named “Toad” have never been cool. I believe his chart confirms that his only power is deflating the X-hilaration I felt after pulling Nightcrawler. 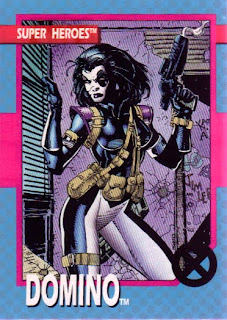 #13 – Domino – Doesn’t she look like the villainous super-human version of Spuds MacKenzie? There’s a dual-purpose X-xx joke about “bones” in here somewhere. 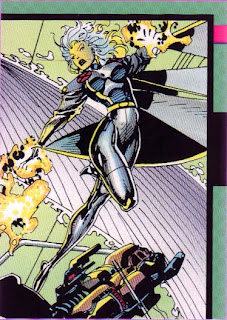 #93 – Danger Room Test Sequence #3: Storm – X-clamation! We have 2/9ths of the puzzle. You know, based on this picture, I think Halle Berry was the wrong choice. They should have cast someone a little more jaundiced. 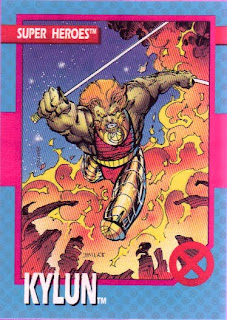 #23 – Kylun – I’m not familiar with this guy. He’s with Excalibur, which I did not follow. The back of his card says he has the “ability to imitate any sound he hears!” So, I guess he’s the karaoke mutant? I’d love to hear him sing some X-posé – while jumping through flames, of course.

So, in case you weren’t keeping track, there were si-X cards in the pack. I’m sure some of you will be disappointed that there’s no Wolverine, but you’re wrong. Nightcrawler more than makes up for it. Okay, this has been too much action for my non-mutant heart. I’m X-hausted.

Email ThisBlogThis!Share to TwitterShare to FacebookShare to Pinterest
Labels: 1992 Impel The Uncanny X-Men

I wasn't a huge fan of the X-Men growing up (Avengers & Spider-Man for me please), but Jim Lee can draw and these cards look very nice. I'll have to track these down...thanks for the post!

Somewhere in my mom's house is a set of these cards... or at least a near-set. A kid a couple years younger than us pulled a Jim Lee auto'd Magneto card out of this set. We tricked him into trading it to us by telling him someone scribbled on it so it wasn't worth anything. I still feel bad about that. -Andy

Ha! Someone scribbled on it...classic! If you find that set would you be willing to part w/ it?

I have a near-set somewhere in the house. I was more of a X-Factor and Wolverine fan