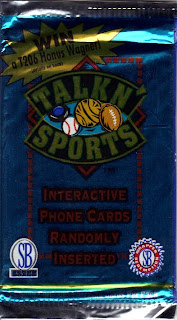 4 trading cards and 1 phone card (does this differentiation mean it cannot be traded?) per pack. Oh, and a chance to win a T206 Honus Wagner card. I won't get into the very long rules regarding it, but suffice to say you will not be winning any Honus from this product.

The interactive phone cards they talk about are these $10 Trivia phone cards (1:12 packs), where you call the number and play a sports trivia game. If you win, that's your first step to winning something. There are other similar inserted phone cards and whatnot, but who really cares? 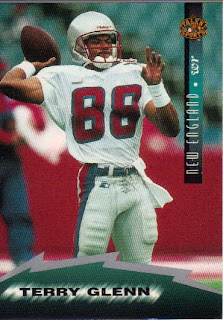 #9 - Terry Glenn - A wide Reciever (that I've never heard of, but I know little besides the biggest names) posing like a QB. Interesting. Oh, I should mention that these cards aren't licensed, so expect a bunch of air brushing.

What an electrifying design (like a phone line in use)! And the player's name looks like it was revealed under a scratch off area, sort of like the scratch off area to reveal the phone card PIN! 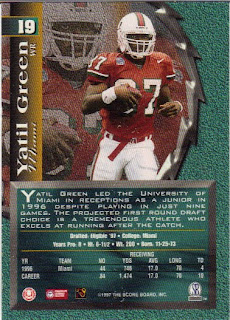 #19 - Yatil Green - Another WR I've never heard of. Evidently he was going to be a rookie this year. I could check wikipedia or something, but I think it's quicker to assume he was a bust. 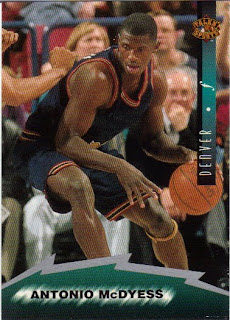 #29 - Antonio McDyess - Here's some clear airbrush action. McDyess was a solid player, but never great. I stopped following basketball, but I think he was playing with the Spurs last year. 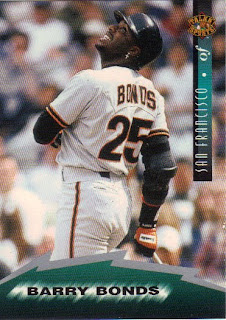 #40 - Barry Bonds - This card takes the 2010 Upper Deck approach to hiding logos. At this point in his career he had just hit 42 HRs and had only 334 for his career. It was all downhill from there, really. 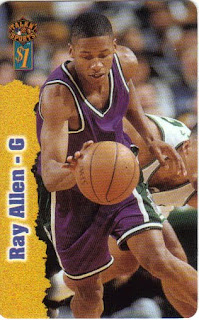 34 of 50 - $1 - Ray Allen - Keep your eye on the ball, He Got Game. Unfortunately, this expired in 1998. Also unfortunately, phone cards are only really useful for people with international ties.

I like the novelty of the product 13 years later. I actually liked the novelty back then, too. Of course, everyone but the manufacturers knew that that phone card sportscards were not going to catch on, but they became something of a "modern" oddball insert that's kinda cool to make part of your collection. Sure it's worthless, but it's unique and the plastic is certainly more durable than the normal card. How often can you say that?