O-Pee-Chee essentially had the license to print Topps cards in Canada. In many ways, they are the Canadian special-ed brother of cool kid Topps. The cards are often off center, and the edges look like they were cut from the sheet with a hand saw.

The set was also usually smaller and featured a few extra Blue Jays and Expos. The 1987 OPC set was 396 cards.

I believe these were distributed in 48 pack, 6 cards per pack boxes, but don't hold me to that.

We begin with the pack, which has a bunch of foreign words on it. Korean or Italian or something. I don't know, I only speak American. As an added bonus, the back of the pack encourages me to "Be A Superstar - Don't Do Drugs!" in two languages. 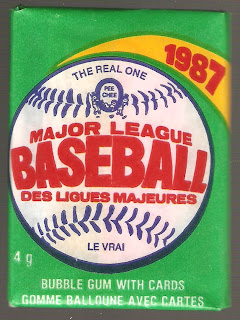 #347 Scott McGregor & #308 Don Slaught. Good representation of the centering on OPCs on both of these. The Slaught almost has the top portion of the back of the card cut off. 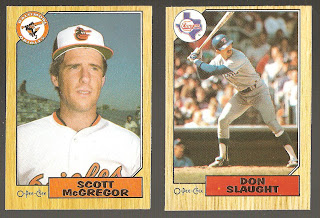 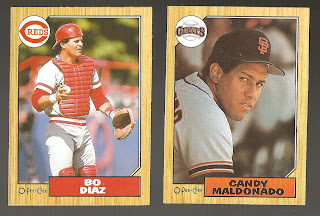 #202 Danny Cox & #307 Kevin Mitchell. I believe "Now with Padres" is French for "Got run out of New York for being thuggish", but I'm not sure. My French is a bit rusty. What you don't see here is the 22 year old piece of gum that is superglued to the back of the Cox card. 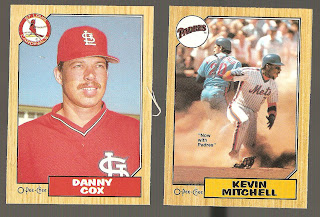 My "bonus card" is non other than Hall of Famer, fan favorite, and (alleged) womanizer Kirby Puckett. I've shown the back as well. You can see it's a different, lighter stock than '87 Topps. Think of it as a similar consistency as that white recycled cardboard that your cereal box is made of. But thinner. Kirby plays the position of Voltigeur, which honestly, sounds cooler than Outfielder. 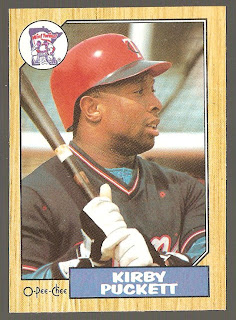 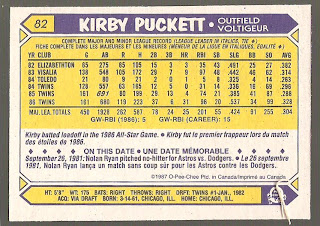 So, there you have it!
Au revoir!

It's much easier to become a superstar WITH drugs, though...