Written by Todd Uncommon at 7:47 PM 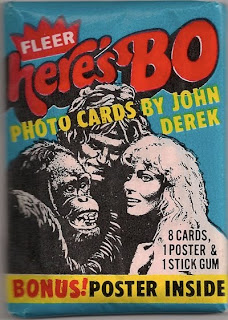 For a period of about five years, around 1979 - 1984, the country went moon-gecko crazy over Bo Derek.  Although her primary talent at the time was being more super naked than anyone else, nobody seemed to mind.

I first remember her from a small role she had in a Jaws knock-off movie in 1977 called Orca.  I was a little kid suckered in by the poster art, as advertised in issues of Fantastic Four and The Incredible Hulk at the time.  It had this image of a massive killer whale smashing through a skiff, with a guy standing / flailing astride the mammal-zilla, with his harpoon arm cocked back and ready to strike at the creature.  Somehow I managed to get my mom to take me to see it, and since it was rated PG, she relented and took me.

The poster art was better.  Basically, it's a Jaws-meets-Moby Dick-meets-interspecies murder revenge.  The better Dumbledore guy kills a female and its miscarried calf, and the male killer whale exacts revenge by biting off Bo Derek's leg, among other acts.  Heady stuff for kid who's seven, and I survived, but I remembered Bo.

Two years later, she would star in the movie "10" with a twerpy Dudley Moore, make long cornrows seem like a good idea for way too many people, and again, be better at being naked than anyone.  At the time, she was married to John Derek, who was something of the Rick Salomon of his day.

He was previously married both to Ursula Andress, and to a pre-Dynasty Linda Evans, and managed to put all three of his wives in Playboy (with him behind the camera) at one point or another.  This was back when you still had to first marry the woman you intended to exploit semi-legitimately.

Which brings us to 1981.  I'd love to hear the actual story of how the Frank H. Fleer Company got hooked up with John Derek's "Svengali Productions, Inc."  Their union is commemorated by the legal copy on the back of the pack: 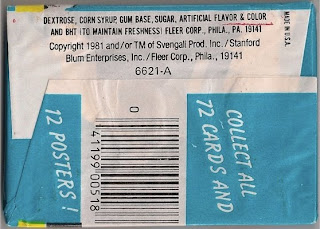 Fleer had just won the right to produce baseball cards after years of litigation, and must have felt like they could do anything.  Now, I can imagine the company getting a cold call from J.D. himself:

"Hey, you guys make those trading cards, right?  Well, I got a wife to sell, see?  Everybody wants her.  Super hot. You ever see that movie, "10"?  Yeah, that's her, with the hair rocks.  I take lots of pictures of my wife.  All kinds a' pictures.  Sell to every magazine I can find in the phone book.  Thanks, but luck has nothing to do with it, friend.  Now I got her in a monkey movie.  No, a good one.  Anyway, here's the deal: you make cardboard, I take pictures.  Bam, we're in business!  Besides, Topps told me to pound sand, and those Dornuss guys are in bed with Disney, and don't want no naked pictures of my wife.  Fools."

As a result, for the kids(?), Fleer produces a 72 standard-size card set with a set of 12 bonus mini-posters that are about 9 1/2" x 6 7/8".  There were eight cards and one poster per pack.  Either J.D. or Fleer must have kept the naked pictures to themselves or for Playboy, because nothing I opened got even close to a PG rating.  This is like a prude version of a Benchwarmers set. 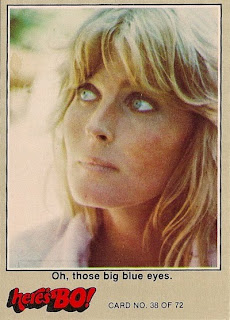 #38 - "Oh, those big blue eyes."  What, no exclamation marks?!  They're required of any non-sport caption text!  Otherwise, it lacks enthusiasm, and looks like this. 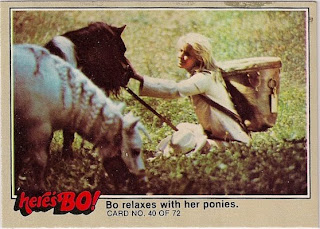 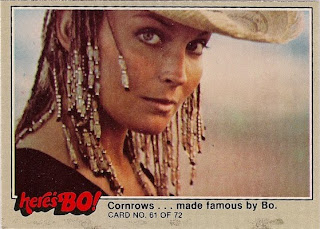 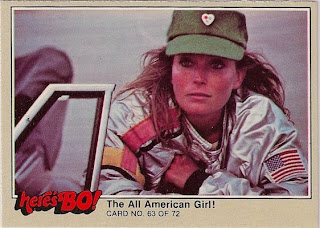 #63 - "The All American Girl!"  All-American exclamation points!  Now that's what I like to see! 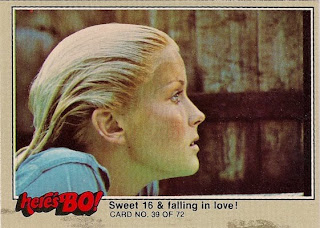 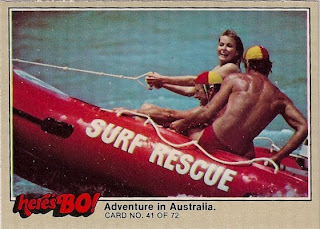 #41 - "Adventure in Australia."  Easily the card I hate most in the pack.  What a ripoff to get an Australian lifeguard's back instead of Bo Derek's front. 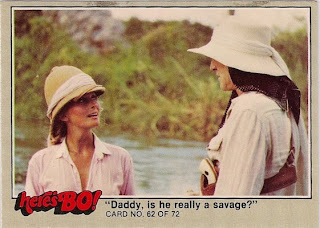 "No, he's your co-star, darling; he just acts like one.  His acting skills make you look like you're ready for As You Like It.  You should see him when he gets a role with speaking lines.  You'll never hear the words 'steak tartare' the same way again. This guy makes wood look like fireworks. Now, please, moar nekkid." 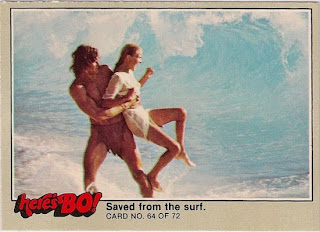 Now on to the poster. 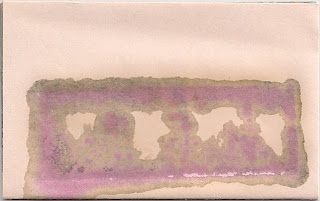 Folded up in the pack into thirds and then half again twice, it appears that the poster took the hit for the card team against the slab of gum.  The gum had pretty well disintegrated into dozens of smaller chunks, but it did leave a stain on the poster that is dry, but looks as wet as if made an hour ago! (How is that possible, since these gum sticks had less moisture than a communion wafer?)

At least once you start to unfold it, it's quite helpful: 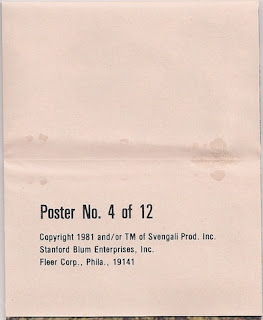 After all this, we're finally on to opening the whole thing.  The anticipation is peaking; it's almost unbearable!  Oh, the excitement of seeing a poster, sealed up for 31 years, of Bo in her prime! What?  This is not a poster, unless it is running for mayor of Worstpostereverville.  Instead, this is a canoe, largely out of frame, with a mustache guy and a blonde, and witch doctors in it or something.  This wouldn't even be used for a promotional image for a monkey movie!  What's it doing here?  Where would somebody put this?  A guy with this in his high school locker in 1981 would get beaten to death with his own Goody comb, ripped right out of his back pocket.

In all seriousness, I could see that collecting the mini posters could be quite a challenge.  The cards are pretty easy to find.  However, (very) easily disposable posters that are still around, without wear or gum stains, may be harder to come by.  Then, of course, you'd first have to find somebody to want timelessly disappointing works of art such as this.

Bo Derek was super hot. I believe that she still is a 10.