Written by Jonathan @ RGB Cards at 11:00 PM
Our second pack of AFL cards is Select's "Team 2010" series. Team 2010 is based more for the younger audience, as the cards are part of an online game, which I suspect is similar to Topps Attax. I'm not really sure so let's just get into it. Here's the pack:

Nine cards per pack at the same price point (okay, you got me, it's $2.95 instead of $2.99 for the 2010 Champions). There are 166 base cards, as well as silver and gold parallel (which if I had to guess, probably boost the ratings for the players. There's also a captain card for each team (so that's 16) with silver and gold parallels as well. The silver parallels are seeded one to a pack, and the golds are one to every two. But since this is a trading game, I don't think scarcity is what Select is going for here.

First card up is Mark LeCras: 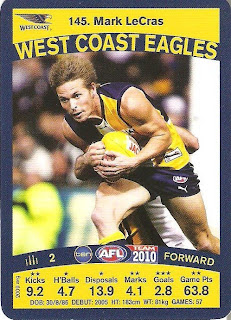 LeCras plays for the hometown Eagles, and while I'm not an Eagles supporter like my wife (and thank goodness for that, as they're 0-3), LeCras is one of my favorite players on that team. He's scrappy and he hustles and he's pretty good. It's the qualities that Cincinnati sports fans always seemed to appreciate in their Reds. 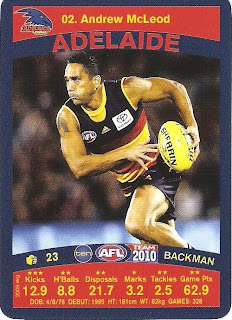 Yes, the cards have rounded edges. They look and feel very much like playing cards instead of trading cards. 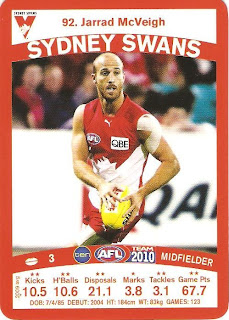 The scoring categories in this game are the same as the big statitistical categories in Aussie Rules: kicks, handballs, disposals, hit-outs (that is, getting the ball out from a pile in the middle of the field to one of your teammates), marks, tackles and goals. Judging by the star ratings, McVeigh looks like a spectacularly average player. 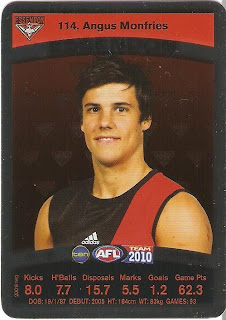 Even though you can't tell thanks to my scanner, there's my silver parallel, and it's of a guy I've never heard of. No star ratings, I notice. Maybe the silver parallel makes things so awesome that star ratings are no longer needed. Who knows, I could get lucky and get a gold parallel in this pack, also. 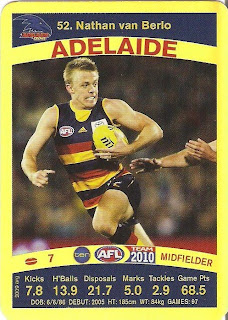 Okay, that was kind of a joke, but with the next card I pull the gold parallel. I haven't heard of van Berlo, either. Too bad it's not a card of Mariners bench coach Ty Van Burkleo... 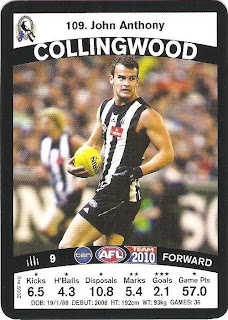 Ah, good ol' Collingwood. The AFL team that is the best supported, and at the same time the most despised. With a history of success, they are like the New York Yankees of the AFL. But not the Yankees of the 50s, or 70s, or late 90s. More like the Yankees of 2001-2008, who had great teams in the regular season but couldn't get it done when it counted most. 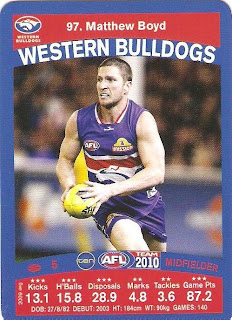 Judging by his star ratings, he's a handy guy to have on your team. 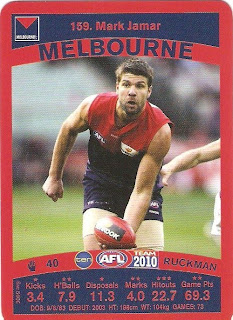 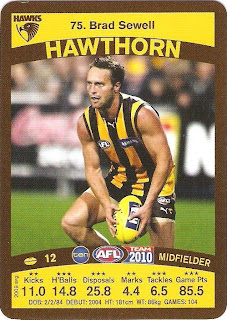 All in all a pretty uninspiring pack. I'm sure that if I went to the game's website (teamcoach.com.au) and actually looked things up, the cards might make more sense, but probably not. There's nothing on the backs except the team logos, which fits in with the game card theme, I guess. I don't think I'll be buying any more packs of these.

You gotta love a sport where "Disposals" is a statistic!

The more sought after cards included in Team 2010 packs are the wildcards. There are 3 different types:

The website has a few different games played using the cards. One is a game similar to SuperCoach or DreamTeam where you can win sets of prize cards which are different from the cards found in packs and are valuable to collectors. The wildcards are used in this game to represent a gold card of any player from that team making the collection of full gold sets unnecessary to play the game.