Written by Todd Uncommon at 6:56 PM 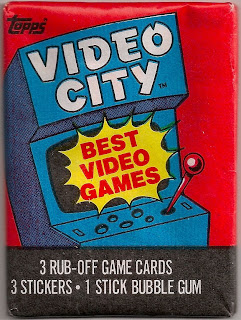 Outside of Internet fighting on Wikipedia about whether the "Madden Curse" deserves its own article page, this is one of those rarer occasions where I can join two of my favorite hobbies: sports and video game collectibles and memorabilia.  For under one dollar on eBay, I can take a slight dead end down memory lane with this pack.

In another instance of being late to the party, Topps decided try to cash in on the craze of arcade video games.  They released a video game themed non-sport set, Video City.  Home-based game systems started to visibly eat the lunch of most of the traditional arcades by this time, and over-saturated their own market with uncreative and indistinguishable product.  Just imagine if all of these web-based and social media games today were pay-for-play; maybe that would be the Mini-game Crash of 2011.

The Video City set focuses only on four particular arcade games of the day (as the pack wrapper proclaims them as "best"): Donkey Kong Jr., Zaxxon, Frogger, and Turbo(?).  The full set is small, at about 32 cards; 28 sticker cards (containing a little variation on the backs--either a puzzle piece, game tips, or an order form for Electronic Games) and 4 scratch-off game pieces.  Each pack contains 3 stickers, 3 rub-off game cards, and the ubiquitous stick of pink Kevlar.

Everything about this product feels rushed to market, from the limited size of the set, lack of variety in the subject games, and overall production quality.  I can imagine that a manager at Topps had a pretty good idea to introduce a card / sticker product to be sold at the candy counter of arcades, since the gum inside the packs still counted the product as a confection. 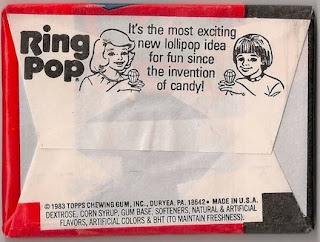 Timing was not on the side of Topps.

It's interesting to note the licensed properties of the games represented: Donkey Kong Jr. from Nintendo, and the other three licensed through Sega (although Konami owns the Frogger content, the original cabinet game was published through Sega/Gremlin since they had the existing arcade business distribution in North America).  Once the NES would revitalize the video game market by 1987, Sega and Nintendo were bitter rivals.  This kind of multi-licensed deal would have been impossible to pull off for probably the next 18 years.  SEGA moved to an all-software model by 2002, and they would no longer push or develop their own hardware console.  Now Mario and Sonic are best buds, it seems, for now.

So what did we get?  Not much, by our even un-lofty expectations.  Here are the three sticker cards:

Got a pair of dupes.  That's tough to swallow, even for this set.  Good thing that the "Space Ace" quote for Zaxxon isn't trademarked, as these guys might have a problem with it, especially in 1983-84.  The mini-stickers for Zaxxon are pretty trippy.  Apparently, our choices are: a sausage rocket with reservoir tip, a lipstick missile launcher, and an is-it-up-or-down Escher rendering of an airplane.  All three backs are ho-hum puzzle pieces (including the duplicate). No game tips, magazine subscription forms, or anything interesting.

Even the separate rub-off game cards have exact dupes:

However, that's probably to be a little more expected, as there's only four different game cards, and I would expect collation in this set to have as much attention to detail as the rest of this enterprise.  The Turbo game card instructions laid down on the gum grenade for the rest of the cards in the pack.  It's not too worse for wear, really, with only a little staining.

Here's the opposite side of the scratch-offs: 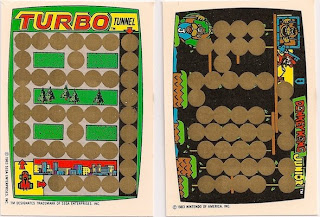 I only showed two of them, since it's a little redundant at this point to show all three.  The gum is unremarkable enough to not show:  it looks to be a freeze dried flesh stick cracked up into five fragments of various sizes.