Written by Community Gum at 9:38 PM
Skybox Inaugural Edition also helped inaugurate me into the game of basketball. Before 1990, I had no concept of what the game was. I knew baseball and I knew football, but somehow basketball had escaped my knowledge base as a 9 or 10 year old.

I remember my dad buying me some packs of these shortly after we had seen either a high school or community college game. Something in a very small gym. He had to tell me who was good and who wasn't. For instance, my dad let me know that the Scottie Pippen I got in my first pack was really good. Turns out he was right about that. The big pull back then was the David Robinson rookie, which at one point was going for around $8. 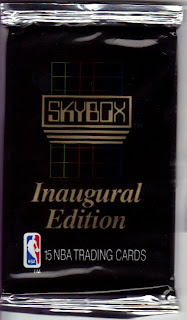 The back advertises innovative stats (how a player might do if he played all 48 minutes of every game, which I assume doesn't factor in fatigue), "computer-charged" design utilizing state-of-the-art graphics, and powerful photographs (action fronts and candid backs from the NBA photo archives). All I knew at the time was that these were far and away better looking cards than Hoops or Fleer. 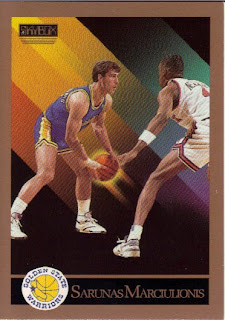 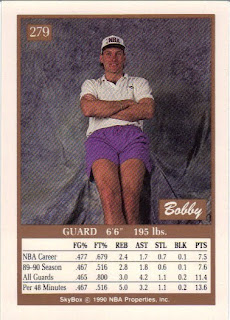 #279 - Bobby Hansen - I'll assume this is one of the photos from the archive. Despite the "innovative" nature of the stats, this is where Skybox is lacking. Only 1 year and the career, a comparison to the position, and the dumb 48 minute thing. Looks to me like Bobby needs to get up off that painter's tarp and practice a bit harder. 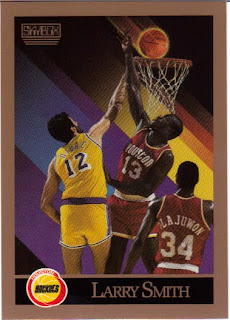 #111 - Larry Smith - One of the most confusing choices for a card photo I've seen. This would be a good shot for Vlade Divac, but obviously the card subject is shown getting dunked on - with computer-charged emphasis no less. Smith averaged 0.4 blocks/gm in 89-90. 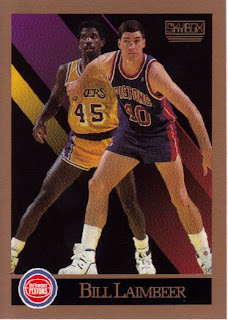 #90 - Bill Laimbeer - I don't think there is another player less deserving of having a video game named after them, and yet.... Here, one of the baddest of the Bad Boys is shown getting fresh with A.C. Green. Careful Bill, Green was still a virgin. You're not going to get too far. 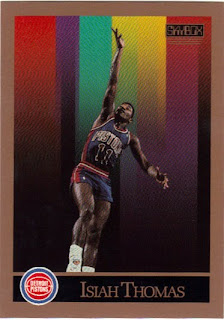 #93 - Isiah Thomas - Another Bad Boy. On, and as we found out years later with the Knicks, off the court. I think in this picture, he's auditioning for the opening of Reading Rainbow or Joseph and the Technicolor Dreamcoat. 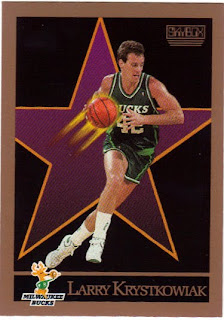 #160 - Larry Krystkowiak - I don't think there is a more inaccurate graphic in this set. One thing I do like about this set, however, is that the backgrounds are different for just about every player. It keeps things fresh and interesting. 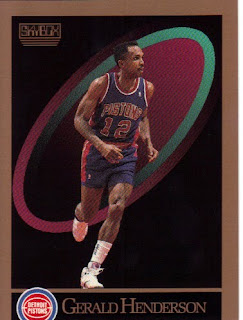 #88 - Gerald Henderson - My third Piston. I wouldn't really call him part of the Bad Boys, but he at least got a ring with them the year before this set. His son was a lottery draft pick last year and now plays in the NBA where he isn't doing so hot. 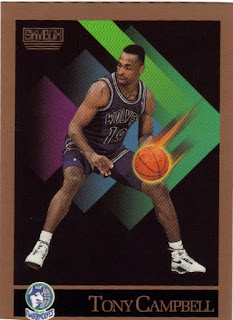 #168 - Tony Campbell - Tony was coming off a breakout year, where he more than doubled his career points per game. This was mostly due to the expansion of the league to include the Minnesota Timberwolves and the Orlando Magic. With no one else to really carry the team, Tony stepped up big time. 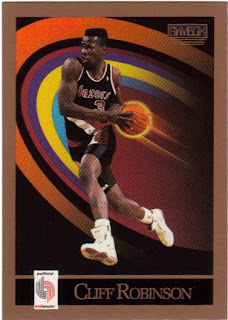 #239 - Cliff Robinson - A pre-headband Cliff. The future all-star and all-defense player didn't show much yet other than he could rock the Kid 'N Play high top fade. 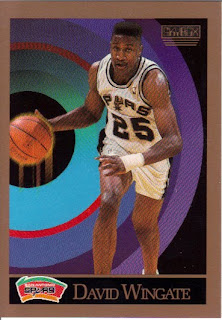 #262 - David Wingate - Sometimes the graphics make the cards. The waves of colors emanating from the flaming ball look pretty good. Especially when compared to Wingate and his face. 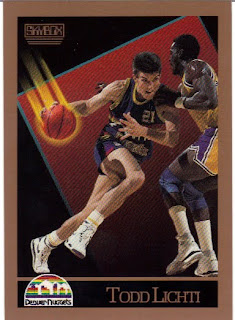 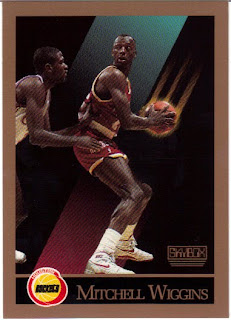 #113 - Mitchell Wiggins - The graphics make it look like he just caught a meteor. Pass it to Jor-El! 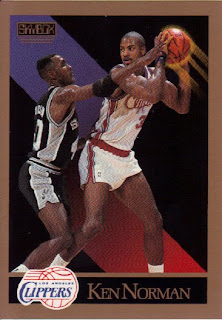 #131 - Ken Norman - Ken's probably a better player than people (read "me") gave him credit for. Not much better, considering he was on the Clippers, but still better. 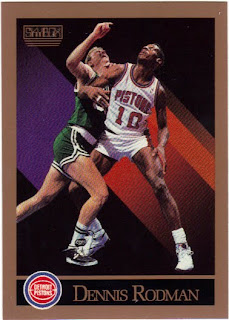 #91 - Dennis Rodman - Jeez. If I was a Pistons fan, I wouldn't have to buy another pack of this stuff. Here he is shoving the pride of French Lick to go for a rebound. Something tells me the Worm is going to win this battle. 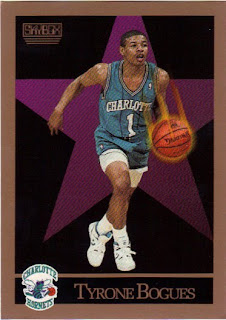 #26 - Tyrone Bogues - Otherwise known as Muggsy (they put the nickname on the back). Muggsy was one of my TTM successes from the old days. I wonder if he still talks about the day he blocked Patrick Ewing. I know I would.

Okay, no David Robinson or Pippen, but still plenty of quality players and 20 years later I still like the look of this set. The photographs aren't always the greatest, but it was a very original looking product made with sturdier card stock. With all the packs I bought as a kid, I'm probably pretty close to the set. Maybe after this revisit, I'll give it a shot.

For better for for worse, definitely a landmark set. It was among the first to treat action photos like editable portraits. It is impressive that every player has at least a slight variation of backgrounds. Although not always a dramatic difference, I can't imagine that kind of variety getting put into any kind of significantly-sized base cards today.

One of the best things about the design are the action lines around the ball. You can have them going pretty much any direction you want, and not go wrong.

I remember that dealers would charge a serious premium when these came out. They were $4-$5 per pack in 1990 upon release, which felt like a fortune. That's up to $6.5 - $8 per pack by today's standards, accounting for inflation.

Although we're easily used to that price (and far more) now, consider that the base cards were the chase, and there are no autos, relics, or parallels.

One of my favorite sets for being experimental. Just players with colorful swirls in the background which fits during that era. I, too, remember it was the hottest thing in the market that year before it all went downhill