Written by Community Gum at 11:05 PM
Excuse me fellas, but I believe these ladies have had "next" for about 13 years or so. Quit hogging the court, will ya?

1997 saw the dawning of a new era. A big "hoop"la was made about professional women's basketball. I can't really say I ever got caught up in it, but I liked the concept enough to buy a can of cards. Yes, that's right. A can. I think the fact that it was in a can was what actually made me buy it. Call me a sucker, but tell me if this doesn't look cool to you.

The WNBA didn't have a Chicago team yet, so I just went with a good color combo. And in case you're wondering, I could have just snapped a picture with my digital camera, but I was lazy. So, I rolled the can along with the scanning bar. I think it turned out pretty well, don't you? Feel free to cut it out and roll it up to make your own can! 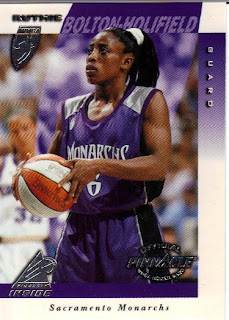 #5 - Ruthie Bolton-Holifield - I'm pretty sure she was something of a star player. The name sounds familiar at least. Not related to Evander, but that's about the only person she's not related to according to the card, which states she's one of 20 children and has 72 nieces and nephews. Now that's a pick-up game! 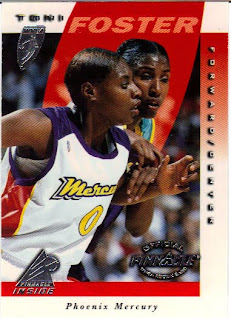 #25 - Toni Foster - Hey look. I think that's Lisa Leslie peeking out there. Note the foil stamp in the bottom right corner that states this is her "Official Pinnacle WNBA Rookie Card." Every card, except for the subsets have this stamp. Further proof that I'm not special. 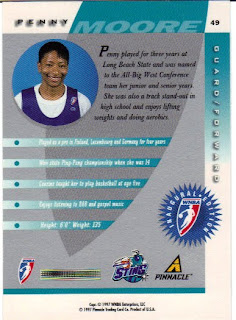 #49 - Penny Moore - Boring picture on the front = look at the back. Since there are no stats for the league yet, they go the Studio route and give us factoids about the players. I'm not really sure why they couldn't put the college or international (almost all of these women played overseas) stats on here, but the design is decent enough. 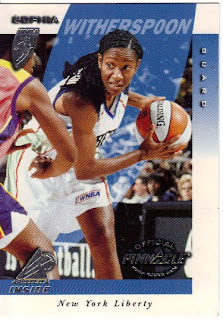 #16 - Sophia Witherspoon - If you couldn't tell, these cards were released after the season had already started. Otherwise, you wouldn't have the in game action shots and the cards really would be like Studio. According to the card, she was the league's second Player of the Week. 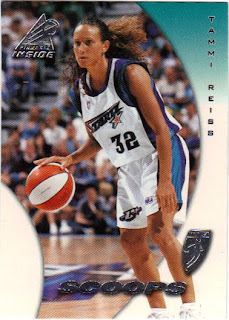 #58 - Tammi Reiss: Scoops - Here's one of those subsets, so I am missing the Reiss rookie. Since all the regular cards have nothing but facts and write-ups, these subsets serve no real purpose other than to pad the set and to get a couple more cards of the bigger players. 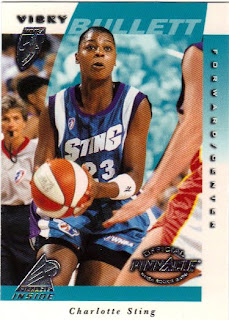 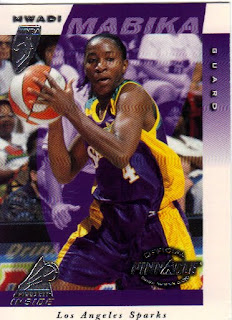 #50 - Mwadi Mabika - She was brought over here from Zaire by Dikembe Mutumbo during civil unrest. She's also 5'11" and listed at guard. The forward/centers are usually about 6'1". 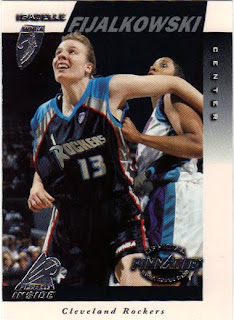 #43 - Isabelle Fijalkowski - Don't worry, the back of the card tells you how to pronounce it. "Fee-ja-COW-ski." Is it me or does she kind of look like Rik Smits? 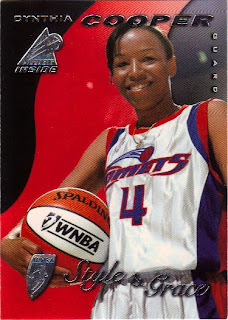 #79 - Cynthia Cooper: Style & Grace - Another subset. Here we have one of the league's biggest names (at least of the time. Not really sure who would be considered the superstars today). Here we also have one of the most boring subsets I've seen. Again, the back is just more random history - nothing about style and/or grace. 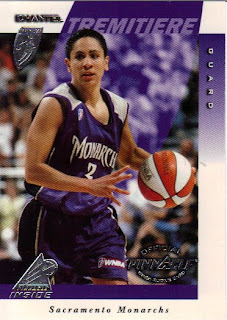 #21 - Chantel Tremitiere - Last card of the pack...er can... and it's another person I don't know. Maybe I would if I watched any of the games, but I just couldn't bring myself to do it. 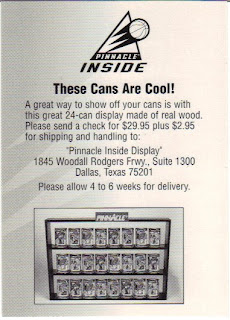 Promo offer card - Only $33.00 for a wooden shelf delivered to your door. What a non-deal that is. By the way, Pinnacle, if you're going to be the ones promoting women's professional sports with a card product, maybe you should avoid the phrase, "A great way to show off your cans." Just a thought.

I guess I can say that I'm glad there's a women's professional league for something other than tennis, soccer (?), and golf. It's even better that it's lasted this long and has actually expanded a couple times. This may pave the way for mainstream professional softball. But with no media coverage, these women are still sitting on the sidelines. I don't think they even have a card product anymore do they? If they do, I'm glad it's not in a can, because the cards very easily get caught on the rim while trying to get them out. It's like you have to play a game of "Operation" to avoid dinging the corners.

Email ThisBlogThis!Share to TwitterShare to FacebookShare to Pinterest
Labels: 1997 Pinnacle Inside WNBA

The WNBA card license has moved twice- first from Pinnacle to Fleer in 1999, then from Fleer to Rittenhouse in 2005. (Things to do if you're really bored and a troublemaker- ask people's opinions of the 2009 set.) Our coffee table is covered with cards from every set except 2009: http://i90.photobucket.com/albums/k256/NYCScribbler/home/table.jpg

Surprised you didn't mention the trivia question on the back of the offer card.