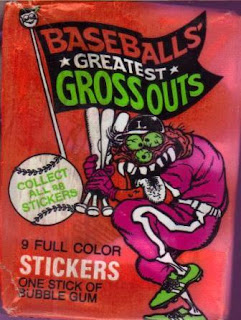 Yeah, you just THOUGHT the 1988 Leaf Awesome All-Stars were bad.  You have no idea.  There are 88 stickers in this set, featuring disgusting creatures from baseball days gone by in some Garbage Pail Kids parallel universe.

First up, we have Benny the Blob, who can block home plate, but can't really tag you out.  It's a stalemate situation, really.  Then, Kiel D. Ump peeks in.  You get it right?  "Kill the ump!?"  Oh, the hilarity ensues.  Somebody should sue.  Joker Joe takes the "slider" to a whole new level.

Rich Kid Richie may have dollars on his hat, but his money would be better spent on plastic surgery.  Looney Lyle is, well, looney.  Since he uses three bats at once, if he misses a pitch, does that mean he's out?  Russ T Armor (who should not be confused with famously-named Rusty Kuntz) throws a wicked curve.

Sad Sack Sal is the cheerleader.  Well, he should be anyway!  Hogface Homer is actually the rejected mascot tryout for the Arkansas Razorbacks.  I always wondered what happened to that guy.  And finishing up the pack, Rightey Whitey.  They say he's a mean right-handed pitcher.  I don't know where they come up with these things.

I actually just broke a box of these last weekend and was looking at doing a review. Lame set that's got artwork that doesn't work for me. Not to mention the fact that the majority of the 'players' aren't at all funny, even in a juvenile way.

Back in the day I tried chasing this set. I forget how many I still Need(needed) to complete the set. I was going for more of a master set of sorts since I noticed that some of the cards had two back variations the puzzle backs and the "stats" back for that "player". I never did figure out all of the ones that had 2 variations.

I have all of the entire puzzle completed and maybe a couple of hundred cards, some repeated. They are all in excellent condition and I was wondering how much they are worth. I haven't opened the box where I have kept them for the past 20+ years so I'm not sure the exact count all I know is the stack stands at least 6 inches high.
my email is jaimedime@hotmail.com

I just found a "Joker Joe" card in a protective plastic case and wondered if it was worth anything.