Written by Community Gum at 9:50 PM
Today I bring you the third (of four) packs of basketball stickers. This time it's by the people who normally know how to do stickers right. I say normally because as you'll see, Panini probably has one of the worst looking products I've ever seen here.

These stickers are made in Italy, but I don't think they are European stickers like the other two I posted this week. They look like they may have been released in the US. I can't find any information online to tell me one way or the other. 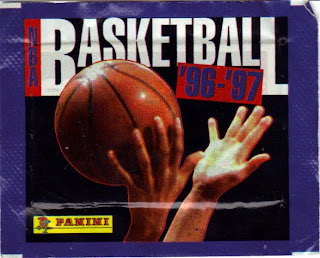 Can this be any blander? (Hint: The answer is yes.) Raise your hands if you'd want to buy this based on the pack art. Put your hands down random staffers that took this photo in some office at the last minute and are trying to convince everyone it's from a real game. Can someone tell me what the deal is with that red outline around the picture? It kind of looks like a printing error, but I don't know if it would be on both sides if it were. 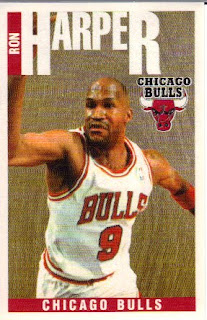 #86 - Ron Harper - Ron would have been a great pickup for us about five years earlier. At this point in his career he was still a good pickup, but wasn't nearly the threat he was with the Clippers and served as more of an off-the-bench/spot start guy. 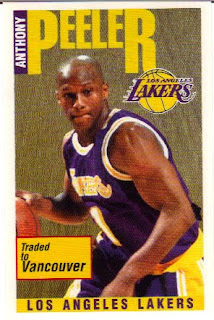 #234 - Anthony Peeler - See what I mean about these being some of the worst looking things produced? All the text just screams lifeless and dull. The background is some sort of grayish brown muck with the tiniest hint of texture. It's like it's literally raining poo on the stickers. 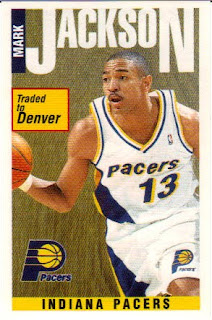 #114 - Mark Jackson - My second Mark Jackson sticker in as many packs. Up for grabs if anyone wants them. This picture makes it look like he's reading the text box that says he got traded to Denver and is surprised by the news. 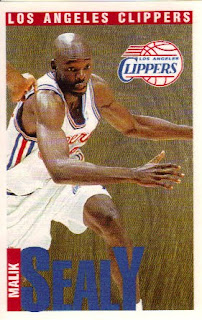 #226 - Malik Sealy - This guy lost his page in my player collection binders by not being good. I had a lot of less good players in those binders that I liked for various reasons. Sealy didn't have much of a redeeming factor. 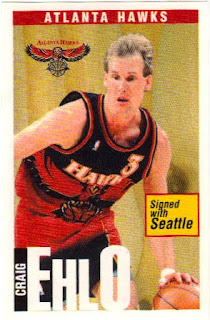 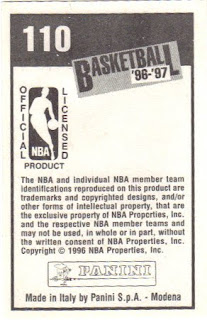 #110 - Don Reid - I'm showing you the back of this one, because I honestly have no idea who this person is. That's a pretty amazing feat for a basketball product from this era. He played for the Pistons according to this, if that helps any of you or in case you were curious.

Some of my favorite collecting memories from my childhood involved Panini Stickers. It didn't matter what the album was for. Whether it was Looney Tunes or He-Man or Baseball, I wanted those stickers and I wanted to fill up those pages. I wanted enough doubles to trade in for the stickers I was missing. They were insanely cheap and highly addictive and a great way for a child under 10 to feel the satisfaction of completing a collection or a set. To see Panini crank out something like this is disappointing. I would love to see Panini put out other sticker albums like this in America (well, maybe not like this particular one). I believe they still do it in other countries. I may even buy them myself if it's nothing too embarrassing. Maybe someday they'll be vintage enough to be cool again and I'll have my wish.