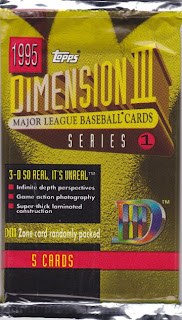 This post practically writes itself, so I'm going to try here not to get in the way too much. This is or was, apparently, Topps's answer to Sportflix (or Sportflics) and I purchased the pack for $1 at a card show the other day. I don't know if there ever was a Series 2, honestly. As you can see, Topps actually trademarked the slogan "3-D So Real, It's Unreal". I don't know what to say about that. 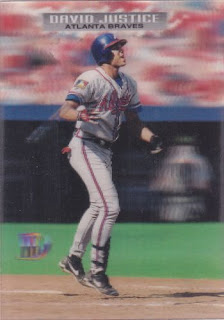 1 - David Justice (There's just a few things you should know about this set. One: Most cards look worse as scanned images than they do when held in your hand, especially when there's any kind of technology other than paper used to make them. With this set, the scans actually look better than the real cards.) 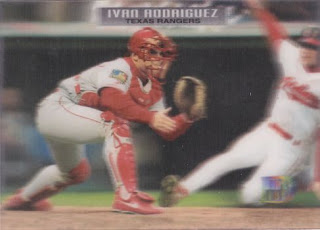 32 - Ivan Rodriguez (Two: In the concept of the "third dimension", objects usually tend to have something to them besides length and width. I think this is usually known as "depth". I don't see a lot of that here. The images don't really even "move" or "flip" like Sportflix.) 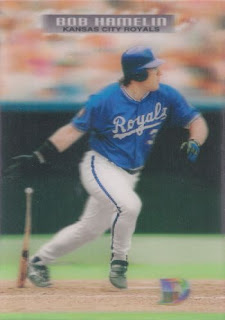 40 - Bob Hamelin (Three: The cards have the same ridged plastic coating that Sportflics have, which also seems to attract a lot of scratches... and a chemical filmy residue.) 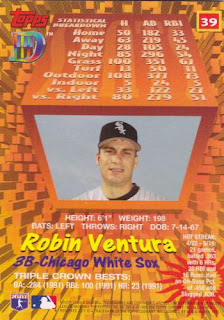 39 - Robin Ventura (This is what the backs look like. And I don't even know what to say about this, either.) 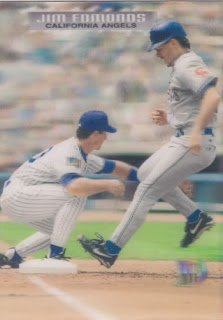 29 - Jim Edmonds (The pack turned into a huge win with this card, however. This goes straight into my Jim Edmonds collection. All is well!)

Is that David Justice card up for grabs? If so, what do you want for it? How does a top loader & SASE sound?!