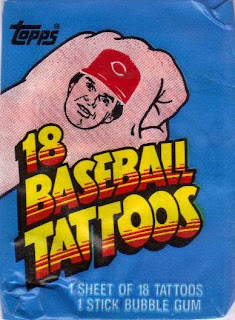 The wrapper features the likeness of Pete Rose on the back of some kid's hand.  There is no need to have the name on there, because like so few lucky (or unlucky) people in the world, Rose is instantly recognizable.  This was, after all, 1986.

The pack has one long strip of tattoos.  Because of scannerbad limitations, I folded the strip in half and scanned each half.  The one above includes: Keith Moreland, Alvin Davis, Doug DeCinces, John Tudor, and Jim Presley.  In addition, we have generic players doing general baseball stuff.

The rest of the tats in the pack include Andy Hawkins, Dennis Lamp, and Mario Soto.  There are more unrecognizable players carrying out their baseball lives on the other tattoos.
In case you didn't know how these worked, there are instructions on the back of the pack: 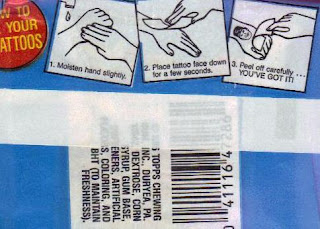 I find it very interesting that neither the front nor the instructions show the player's NAME in the process.  The only way to actually achieve this is to cut the tattoo such that name is no longer a part of it.  Well, I suppose you could be careful about where you put the tattoo on your hand, but really, who would do that?
I have not tried these out to se if they still work.  I might though.  I would also like to se how many times you could reuse the same one (or if you could at all).  Perhaps a follow-up post will come.