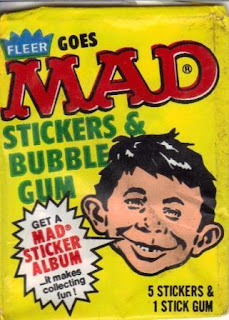 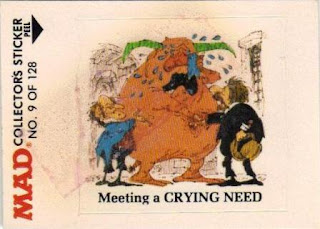 Evidently, there are 128 stickers in the collection.  Many of them feature plays on words.  And, most of THOSE feature some kind of monster thing that represents whatever idiom is being referenced.  It's like comics for English majors. Sorta. 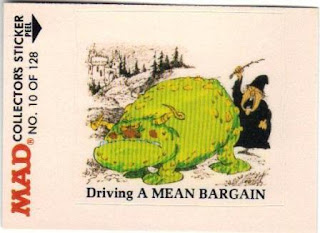 I'm not sure I'd whack that bargain with a stick... 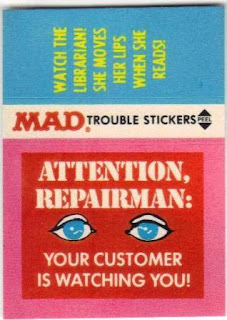 Some stickers are actually TWO-in-ONE! (Though you can't two-in-one because it wouldn't fit, that is why two was invented! - Mitch Hedberg) 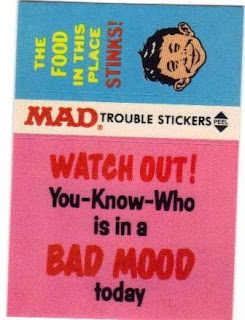 I think someone actually put the "food stinks" sticker on the cafeteria door when I was in school.  It sure seems familiar... 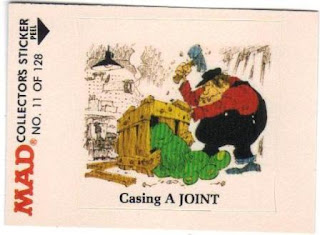 I guess they had to use monsters to keep things kid-friendly.  That's not what *I* would have chosen for "casing a JOINT...." Just sayin.
I ended up with three packs of these after I sent a package off for the 1st birthday bash.  One of those packs was already opened.  The backs of some stickers have puzzle pieces that let you make your own Alfred E Newman.  There is also gum in each pack. Yes, it was stuck to the sticker. Yes, it was nasty to behold.  No, I did not partake.