Written by dayf at 9:07 PM
I went to Atlanta Sports Cards on my break today specifically to get some 2010 National Chicle. I almost didn't get any because I got waylaid by a recently filled quarter box. I steeled my reserve and moved down the counter towards the packs (after picking up a handful of quarter cards) and found... no Chicle packs. Ah, but there were Chicle boxes! The shopkeep graciously packed out one of the boxes so I could grab a few and also let me buy the box loader pack as well. I'm sure there will be tons of people wanting to rip Chicle on this blog so I'll show off the box loader, because that's cooler than a boring ol' pack anyway. 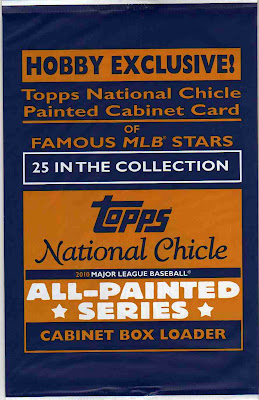 This is a very wordy wrapper. It is informative though. From this wrapper we know that these cabinets are a Hobby Exclusive! that retail purchasers are not privileged enough to buy.  We are also informed that these cards are painted cabinets. No, not those ugly green things in your grandparents' kitchen, a Cabinet card is the term for a larger sized trading card popular from the 1880s to the 1910s often distributed as a premium. The painted part means the images are painted by artists which you knew already about National Chicle if you've been paying attention at all. The card inside is of a Famous MLB Star as opposed to an Infamous MLB star like Pete Rose, Jose Canseco or Barry Bonds. There are 25 in the collection, so if you bought two cases hoping for the set you're screwed. Topps re-emphasizes the fact that this is an ALL-PAINTED *SERIES* with bold white lettering and finally helps me decide if I should call this a Box Loader, Box Topper, Chip Topper or Big Card Thingy Pack in the title of this post. This wrapper is sealed. I must rip it. 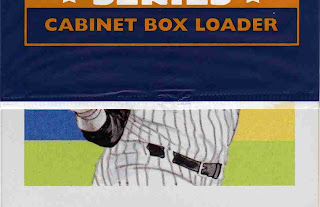 A pack like this you don't open all at once. A quick peek reveals pinstripes. Do you know who this is? Let us consult the checklist: 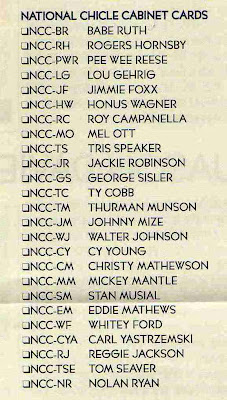 There are no less than six Yankees in that checklist. Make your bets, which Yank will it be? 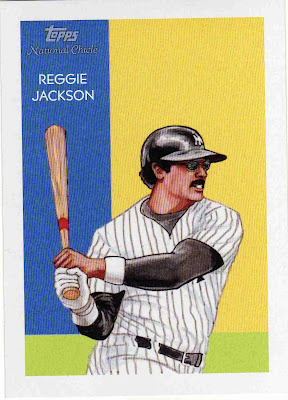 Reggie! This would look awesome as an original sized National Chicle card. There's a little too much white yellow space there for me. Of course it would be a perfect spot for an autograph, assuming you could convince Reggie to sign the thing. The painting is great though, I wonder who dunnit? 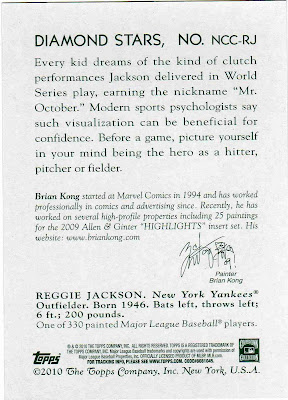 Brian Kong! He's the dude who did the sketches in 2009 Allen & Ginter. Very nice card indeed. I'm not terribly pleased that the 'number' of the card is initials. Set collectors don't like that crap. Dig the crazy text though. It starts with Reggie's world Series exploits and ends in a self help lesson. Verdict: Me gusta.

The slow reveal rocks! The Reggie art is high-energy, and it works.

Love these cards! My box topper was...Mantle & and it was the signed version!!