Written by Jonathan @ RGB Cards at 7:15 AM
This morning, I had a realisation. What good is my position as Australia's foremost baseball card blogger if I don't use my situation to bring attention to card packs that might ordinarily escape the attention of the American reading public? So this afternoon I walked down to the newsstand to pick up a couple of packs of Australian Rules Football cards.

Aussie Rules, or AFL or just plain footy as it's called here, is a really great spectator sport. It combines the grace and beauty of ballet with the ferocity of Smear the Queer (or as my mom made us call it, Smear the Unusual). A winter sport, Aussie Rules players are national heroes, even though many of their careers don't extend past the age of 30, and the only person to make a million dollars last year was the commissioner of the league.

Here in Western Australia, we have two teams in the national competition. The West Coast Eagles have a proud tradition, winning three championships in their 25 years of existence. As the first AFL team in WA, they have a state-wide following. The Fremantle Dockers, on the other hand, have a proud tradition of bupkus. One thing the Dockers are good at, however, is bringing in the cash - despite their futility, Freo is among the richest clubs in the league.

The AFL's spiritual home is Melbourne, and indeed nine of the 16 teams in the league call the city home, with a tenth based in Geelong, about an hour or so away. Adelaide, another traditional Aussie Rules hot spot, has two teams, while the other two are located in Sydney and Brisbane, where rugby is the more popular winter sport.

The pack I'm opening today is Select's 2010 AFL Champions pack. As you can see, it contains eight cards, one of which is a holographic guernsey card, whatever that means. (A short aside - in Australia, they can't be bothered with jerseys, like the rest of the sporting world, so they have to go to the other Channel Island and get their guernseys. Australians are not big fans of sleeves, as you'll see) 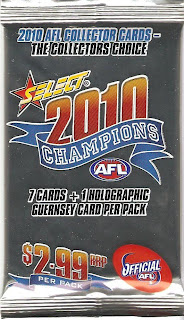 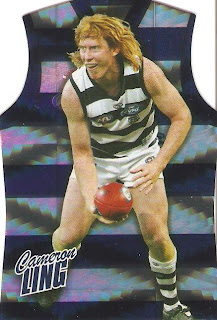 GDC 77-Cameron Ling
Straight on the top is the dynamic guernsey card, and it's of Cameron Ling of Geelong. Geelong has been the team to beat in the AFL as of late, appearing in the last three Grand Finals and winning two of them. They also have the man widely considered to be the best player in the AFL, Gary Ablett Jr. His dad (named - you guessed it! - Gary Ablett Sr.) was a star player for the Cats himself back in the 1970s.

Not Cameron Ling, though. He's just a tall gangly redhead. Surprisingly, that fact alone has given him his own cult following. 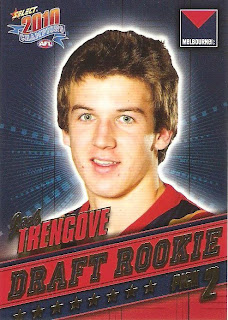 DR2 - Jack Trengrove
Wow! With the next card, I beat the odds and managed to land one of the Draft Rookie cards! This is Jack Trengrove, the No. 2 pick in the 2009 draft. Trengrove's team, Melbourne FC, has fallen on hard times recently. Despite being the original Aussie Rules team (as in, they made up the rules, played in the first-ever game, founded the league, etc.), the Demons haven't ever really enjoyed the success you'd expect. Their best period was the late '50s, when they won five titles from 1955 to 1960, but they haven't won the flag since 1964. The only thing they've been winning lately is the Wooden Spoon, the "trophy" given to the team that finishes dead last. They've won it the past two seasons. Because they have been so bad for so long, the league actually gave them the first two draft picks, and they used the second to draft Trengrove. That's just how things are done here in the AUS. 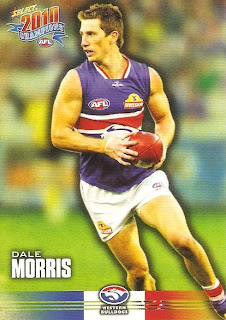 Yeah. They'll win the title. Sure. 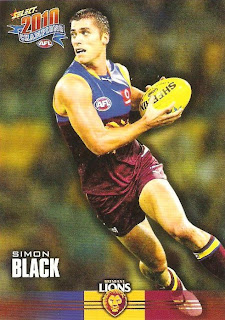 17 - Simon Black
In 2002, Black won the Brownlow Medal, the highest individual honor in the AFL. Unlike awards in the US, the Brownlow is not awarded by sportswriters, fellow players or coaches, but by a vote of the umpires after each match. The officials decide who were the "best and fairest" players, and the top three get points. The points are then counted at a lavish dinner at the Crown Casino in Melbourne a few days before the Grand Final. It's a huge deal, as the dinner and count are broadcast on national television. There's even a red-carpet show for the ladies, as the gowns of the wives and girlfriends are critiqued. And of course, somebody always drinks too much and make an ass out of himself. 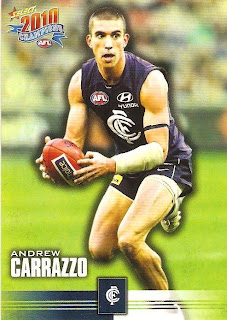 36 - Andrew Carrazzo
Carrazzo had a nightmare first-half of last season, as a broken arm will tend it curtail your playing. His team, Carlton, is one of the best-supported clubs in the competition. They've won more titles than any other team (16), the last one coming in 1995. Think of them as like the Green Bay Packers. Yeah, they have a lot of fans nationwide, and they have a proud tradition and instantly recognisable logo, and they have a lot of titles, but it's been a while since they won the last one and that doesn't show any signs of changing soon. 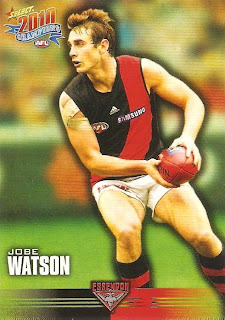 55 - Jobe Watson
Watson is a disposal specialist, which is exactly what it sounds like. In Aussie Rules, if an opponent tackles you, you have to get rid of the ball. If you just hold on to the ball, you will get called for a penalty and the other team gets a free kick. So it's really important to keep the ball moving and get it quickly to a teammate before you lose possession. Aussie Rules is a free-flowing game, and clearance specialists like Watson (who looks like he's about to get rid of the ball in that picture) are a prized commodity. 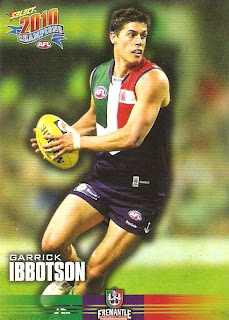 74 - Garrick Ibbotson
Of course, disposals are only part of the strategy. Success in Aussie Rules depends on your team's ability to mark the ball, and that's where guys like Ibbotson come in. If you catch a ball that has been kicked at least 15 metres, you are awarded an uncontested free kick from the spot of the mark. The real advantage of this comes near the goal, as any good AFL player should be able to convert a free kick inside of 50 metres from goal (provided the angle isn't too tight).

The wrinkle is that it's doesn't have to be a teammate that kicks the ball. Any player can take a mark, regardless of the team that kicked the ball. As a result, players from both teams often contest marks, creating an aerial ballet of sorts. The spectacular mark (or speckie) is the highlight of any AFL match. 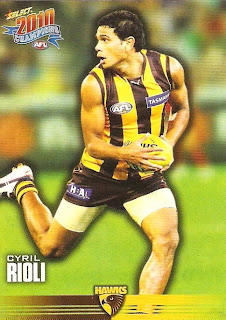 53 - Cyril Rioli
The final card of the pack belongs to Cyril Rioli, a young player for Hawthorn, the team that beat Geelong in the 2008 Grand Final. That just happened to be Cyril's rookie season, but he was in for a rude awakening as the Hawks finished in 9th place in 2009 and didn't even make the playoffs. Riolo finished third in goals behind his teammate Lance "Buddy" Franklin, who I think happens to be the best footballer from Western Australia in the AFL right now.

Think of it like junior hockey. There's a draft, and the AFL club retains the players rights, but can send them back to the lower-league club if they think they need more seasoning.

So these lower-league clubs have a mix of players who have their rights controlled by an AFL club and those playing to get drafted the next time around - just like junior hockey.

There's no collegiate sports system in Australia. Everything is club-based.

Great stuff. I think Americans of a certain age (maybe 25-35?) will think of Aussie Rules fondly as there was a weekly highlights show broadcast on many of the regional sports channels... or was it ESPN2?

I actually consider myself a Collingwood supporter but couldn't actually tell you anything about them, besides the fact they haven't won anything in ages.