Written by dayf at 12:38 PM
This is one of those yearly rituals I keep doing even though I've lost all interest in it. Kind of like following the Thrashers, watching the NBA Draft and Christmas. Every year for the past decade or so I've tried to buy a pack of football draft pick cards the week before the draft so I can have some future rookies in my hands to follow while I'm watching the draft unfold. Several years ago, this was not easy at all, as Press Pass was the only game in town and the local card shop wouldn't get them in until the Friday before the draft, if then. Recently, they've been releasing them earlier and earlier. I recall seeing a blaster of Sage Hit a couple of weeks ago if I'm not mistaken. My local Wally World's card section has been picked over of interesting baseball stuff for a while now so I grabbed a pack of Press Pass out of boredom. I got the Sam Bradford wrapper: 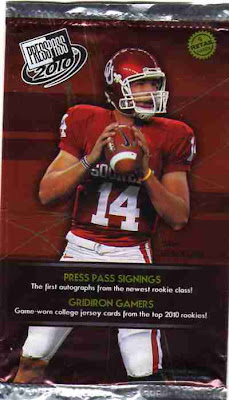 Because there is no friggin way a dedicated Bulldog fan is getting any pack with Timmy Teeboo on the front. Let's see who I'll be looking out for tonight and where they are predicted to fall in the draft. 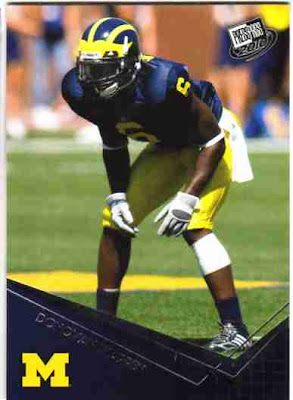 Draft Projection: No Freaking Clue
This mock draft from February has Donovan going in the first Round. This report from CBS Sportsline has him going undrafted.  This guy must have gone to the combine and banged a couple of Tiger's girlfriends right in the middle of the field while smoking a fatty blunt, wearing a Palin 2012 t-shirt and singing the Trololololo song to drop that quickly. Or come in one one-thousandth of a second under projections in his 40-time. Whatever the heck he did to plummet like a stone, somebody will pick upwhat was once considered a first round talent around the fifth round or so once the GMs start getting bored.

The Press Pass design is actually not too bad this year. Big full bleed border, some foil laserbeams on the bottom and a nice college logo in the corner. Pretty standard fare for Press Pass. 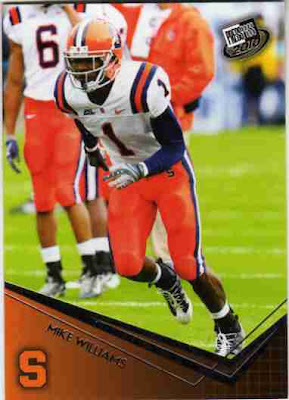 Draft Projection - Sixth Round
Played 7 games over the past two years due to academic issues and suspensions, apparently sucked in the combine and is apparently a general pain in the ass. Can any Syracuse fans confirm this depressing scouting report I got from the Googles? Am I getting caught up in the pre-draft disinfo campaign from some team who wants to snag him in the third round? Some GM will go play golf on the last day and let an intern pick so he shouldn't fall completely out of the draft at any rate.

The lighter border color on the Syracuse card shows a cool grid on the bottom right corner for no apparent reason! Now that's card designery. 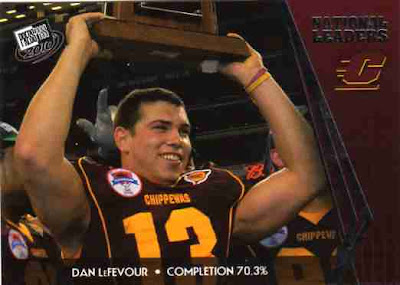 Draft Projection - Third Round
It's like a rule or something that a small conference QB that put up crazy numbers has to be selected in the third round every year. Danny Boy is this year's candidate. I apparently got the Michigan hot pack.

In the olden days, Press Pass had a smaller 45 card set and a shiny die-cut one per pack insert card in their set. The past few years they've ditched the insert and boosted the set size with a bunch of subsets. I liked the shiny insert better. 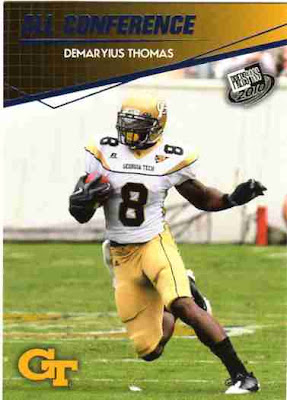 Draft Projection - Second Round
All righty, a local guy in the pack. The entire Tech squad declared for the draft so it's not surprising. Nice looking card at least. I gleaned the potential draft positions for all these dudes by checking out this massive list of Mock Drafts. I'd link to some of them, but some of them are very pop-uppy. Plus, I closed most of the windows and I'm too lazy to click again.

This is one of the one per pack parallels with blue foil instead of silver foil. Press pass got rid of the inserts but kept this crap. This is why I prefer Hit for my worthless NFL prospect cardage needs. Of course doesn't Upper Deck have this market now? Who knows... I should really stick with what I'm good at.

No, that's accurate. Mike Williams has potential big-time behavior issues and he tanked in the combine.