Written by Community Gum at 10:16 PM
This will be the last pack of basketball stickers I'll post for a while...I think. I don't believe I'm hiding any others anywhere. But I saved the best for last.

You may have seen his face on a couple of pack fronts before, but not only his he the cover boy, he's also the entire set. Yes, it's Michael Jordan: The Sticker Album. Once again, this is a European release. I guess Michael isn't well known enough in America to sell stickers. 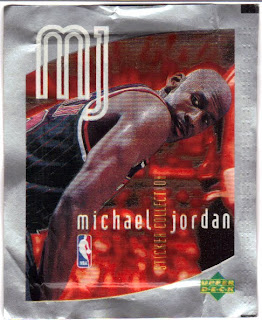 "They're doing what? A whole set? No one else? Okay. I'm going to shoot this free throw with my eyes closed now to teach this rookie a lesson." 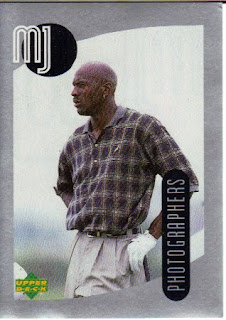 #120 - Photographers - Here they feature Jordan's other love: gambling on the golf course. 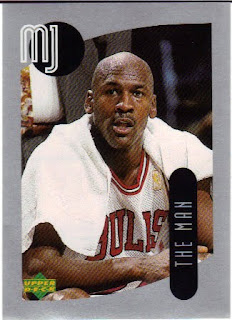 #77 - The Man - So, I guess the text in black is the section of the album these would go into. I'm not exactly sure how taking a breather on the bench illustrates how he's "the man," but maybe in context of the album it works. Most likely not, though. 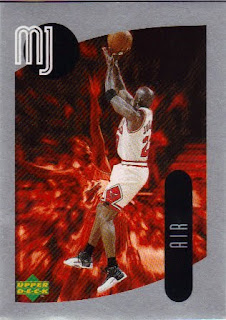 #128 - Air - Yeah, I guess.... I'd reserve "air" for dunks and put this one under "The Man," because I believe this is his shot over Mr. Russell of the Jazz. Kind of hard to see with the Terminator visor effect going on with the background. Actually, it can't be that shot. Russell would have his back to us. 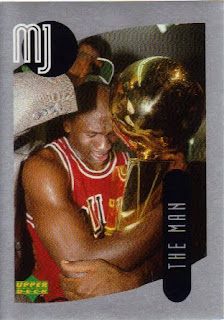 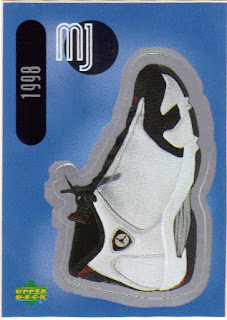 #SU20 - 1998 - Gotta be the shoes! Honestly, how many other sports personalities could get away with having cards for their shoes? Let alone a card for each year? If only it was a better year. This one's quite dull. 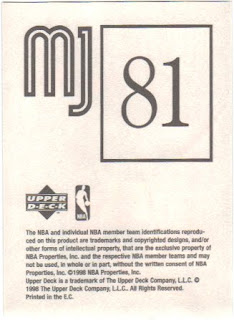 #81 - The Man - I'm showing you the back because the picture is just him standing on the sidelines in his warm-ups. Again, not sure how that indicates "man-ness." 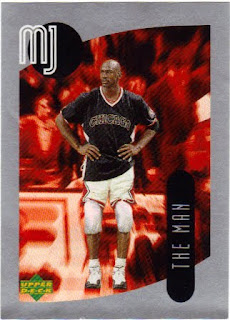 Alright, here's the front. I couldn't deny you the pleasure of seeing His Airness, even if he's not really doing anything. Although maybe all that blurry red around him means he's going into warp speed.

Easily my favorite of the four releases I showcased. I'm a Jordan fan and have an okay collection (which stopped when I stopped collecting over a decade ago). I would have eaten this stuff up. I have quite a few Jordan pogs, after all. Now that I'm back collecting (mostly baseball), I'll gladly add it to my Jordan pages and who knows if the set may someday be mine.