Written by deal at 7:41 AM
File this under cool junk for a dollar.

1989 Topps Baseball Talk Collection is a Set of oversized cards (5 1/4 x 3 1/4) that include a disc on the b-side that apparently plays audio clips of or about the players. I suppose the whole thing was an idea to market an overpriced device (the LJN Player) to play the disc. I found this pack for $1 at a recent card show.

The cards came in plastic casing with the following cover info:

Pardon the fuzziness but, I wasn't going to rescan. If you enlarge the wrapper, you can get an idea of what we are talking about here - each pack has 4 cards lets see whats inside. 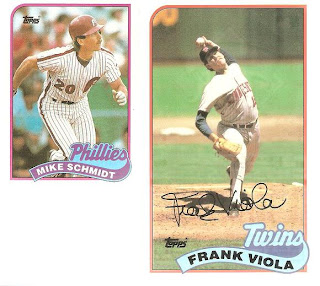 The Schmidt card was not in the pack, I just added here to give you an idea of the card size. The card design is basically the same as the base issue. The Topps Logo has been moved from the top to the bottom of the card. A Facsimile auto has been added to the BTC version. Lastly the dimensions are slightly different with the BTC card being "taller" for lack of a better term. 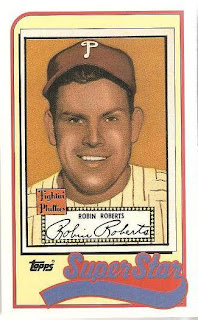 Well Alright! A Phillie, and this Phils Hall of Famer really was in the pack unlike the Schmidt Card. The retro card featured on the BTC card is, of course, Robin Roberts 1952 Topps Card. Pulling a Phil in the pack makes this whole adventure worthwhile already. 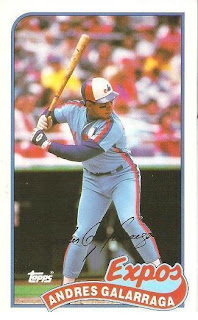 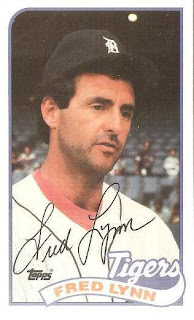 I couldn't find any of the 89 Topps cards of Viola, Lynn, or Galarraga - but you can check them out on line at ebay and other sites. Both the Viola and Galarraga shots are totally different then their Topps regular issue. The Fred Lynn card is the same photo, but the BTC version crops further down due to the slightly different aspect-ratio of the card. 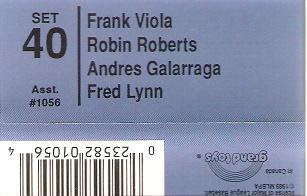 I knew I was going to get he Robin Roberts card in this pack - The packs are actually 4 card sets with the contents labeled on the reverse of the packaging. 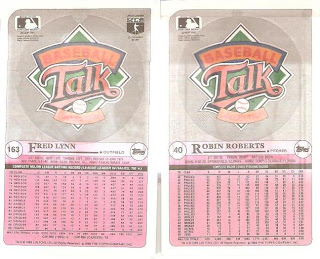 You can see the disc on the top of these cards. The bottom of the card contains the typical 1989 card back. The Roberts Card has full career stats. 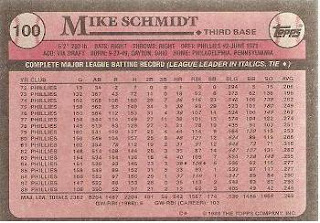 As you can see the 89 Base Set is trimmed in black rather than white but otherwise the design is the same.

This is the checklist included on the flip side of the wrapper. Basically each "Set" contained 3 players that were current in 1989, and 1 special card that was either an Historic player or a Great Baseball Moment or game. (click to enlarge)

There are 41 sets which makes 164 cards if my math is correct.

I had these as a kid! The player too. It was interesting.

I remember buying a bunch of these and the player on clearance at KB Toys. I know that I've still got them all, but the only question is where the heck are they 4 moves later.

I remember the TV commercials for these. They seemed outrageously expensive (for me anyway) at the time. I want the Cardinals from this set or collection or whatever.

I still have the whole set, and a working player! Classic card set!!! I love it still!