Written by Jeremy at 9:59 AM
Here is a pack of Iron Man 2 Movie Trading Cards. I believe this is the first pack of movie trading cards that I've bought since E.T. in the early 80's. Let's see how they look. 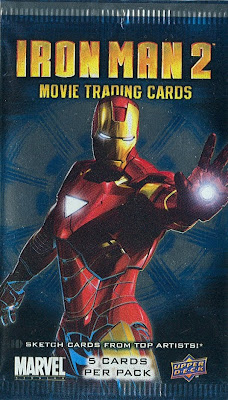 You might notice: "Sketch cards from Top Artists*" is advertised on the bottom of the wrapper.

You'll also notice their is a little asterisk at the end of that statement. On the back of the wrapper is this wording: "Set content is subject to change. No card is guaranteed to exist within an individual pack, box or case." Odd wording. But then again, this is Upper Deck. I was hoping for a sketch card, but I didn't pull one. I did get something cool in my pack though. 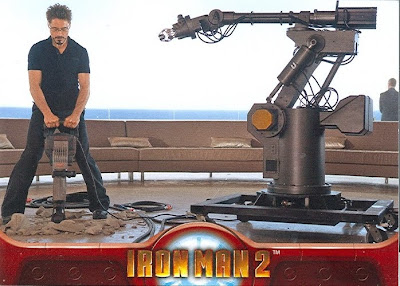 This card is labeled Buried Treasure and has a little write up about what's going on in the card. I won't go into too much detail; I don't want to ruin any of the plot lines for people interested in seeing the movie.

The blurb on the back doesn't mention anything about why Tony Stark's couch is so long though. I think that needs an explanation more than anything. It doesn't bother me that he's drilling a hole in what appears to be his living room. I guess rich guys can do that. I guess that explains it: rich guys have big couches and big living rooms to contain their big couches. Maybe it's not his living room after all. To the right of the "screen" you can see a dude in a suit acting as look out for him. 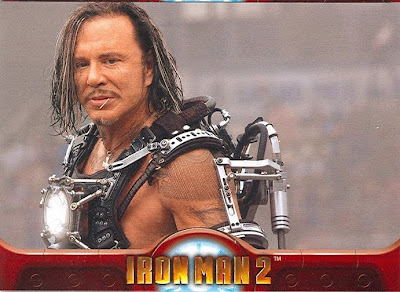 Ivan Vanko AKA the Whiplash portrayed by Mickey Rourke. He doesn't look that odd here. Playing a cartoon villain suits him.

Nice looking card but I pulled two of these in a pack of 5 cards so that kind of sucks.


Here's the back in case anybody is curious. 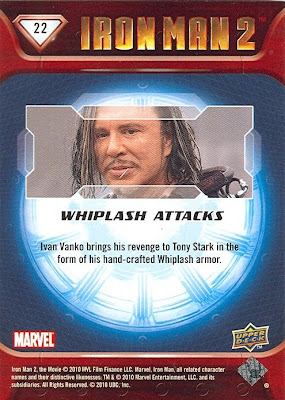 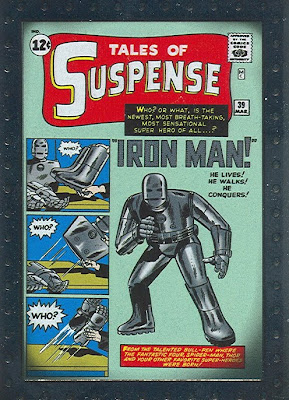 This was the hit of the pack. I haven't been able to find the seeding of these, but these are pretty cool.
It's hard to tell from the scan, but it's got a shiny border that also has upraised "rivets" around the border. The card itself isn't shiny really. I'm pretty sure this is a Steve Ditko drawn cover,and it depicts the first appearance of Iron Man. Big change from his first costume and the one depicted in the movie. 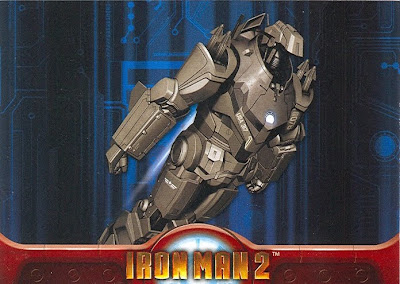 It's a Drone of some sort. I haven't seen either Iron Man movie yet. I really need to go out and rent the first one. I was never a huge Iron Man fan, but I really liked all the Marvel Comics from that era of the early to late 60's.

The three different cards I pulled are all horizontal, they probably all are for that matter to replicate the framing of a wide screen movie. They aren't "wide screen" though like the Star Wars cards I've seen online.

They look pretty cool though. I don't think I can add collecting movie trading cards along with the other stuff I'm collecting, but it would be cool to pick up a pack or two now and then.

Good guess on the cover artist, but that's Jack Kirby all the way. I wonder how big the cover set it, I think I might have to go after them.

Actually looking online the cover's attributed to Don Heck and Kirby. Kirby would've been my first guess, but I didn't think it was Kirbyesque enough. Oh well. I'm usually wrong about almost everything anyway. I'd also like to go after the cover set. I don't have any idea how big that subset is either.

this movie was so amazing from the season one until this season i really admire the creator of this movies a know that this beatiful film and will be release soon. i really really like it, i don't want to miss this movie. i will watch it.
watch iron man 2 online

...and I thought the caption for the first card was "Drill, baby, drill"!