Written by Collective Troll at 12:44 PM
This edition of Troll on A Pack to be Named Later is of 1985 Topps Super Baseball. These are called super because they are gigantic cards. 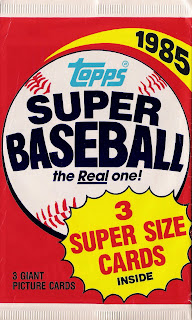 The cards measure 5” by 7” and here is a comparison between 1964 Topps Giants, 1985 Topps Super and a standard sized card. 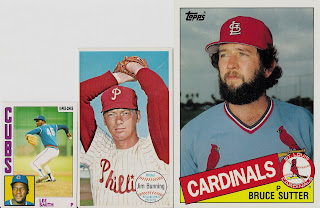 The set had 60 cards in it, all stars from that time frame.

It didn’t include hot rookies from ’85 like Kirby Puckett or Roger Clemens, but did have a Dwight Gooden card. I don’t know if these were a hobby exclusive, but the only place I ever saw them was at the card shop back then. I recall that the Gooden rookie was selling for 25 bucks plus at my local shop. 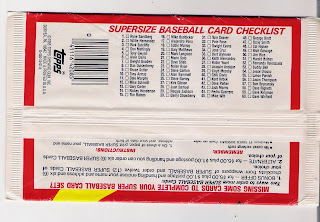 I know this because the one pack I bought back then yielded a Gooden card and I sold it to them for enough cash to buy a 1972 Steve Carlton and then some. The pack I just ripped didn’t produce a hot rookie, but it did yield a Hall of Famer, a former fav player of mine and a pretty significant pitcher from my youth. 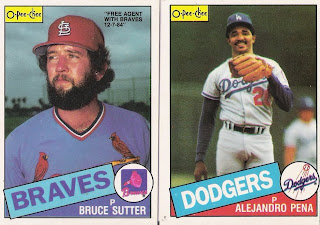 I don’t have any ’85 Topps cards on hand to compare these to, but I pulled a couple from O-Pee-Chee set and I will guess that they recycled and enlarged the same images. Here is what I got…
First out is a Hall of Fame fireman with a Hall worthy beard… card #9 of Bruce Sutter. 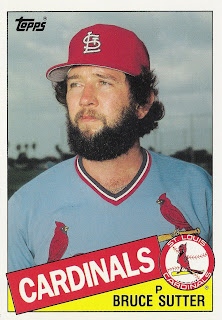 I won't write much on Sutter, but I will say that the enlarged version of this card looks far better than the muddy little one and that is quite a beard. 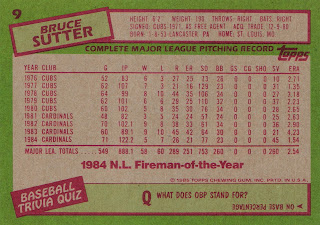 How does that land on the Beard-o-Meter? 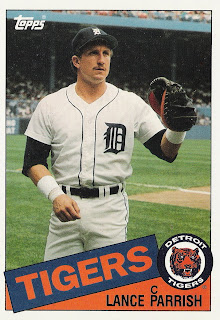 Next up is card #55 of Tigers All Star catcher Lance Parrish. In Little League I played catcher up till I was in 5th grade and switched to the middle infield. I was on the Tigers and I caught, so naturally Lance Parrish was an idol of mine. I remember at one point having a Nike poster of him with a large cat the read “Tiger Catcher” on it. The Big Wheel was an 8 time All Star, won 6 Silver Slugger Awards and 3 Gold Gloves. 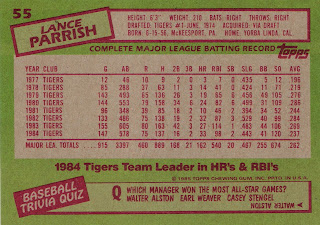 As a catcher he hit over 300 homers but still got no love from Hall of Fame voters. I really can’t believe that with all of the stars on the ’84 Tigers-Parrish, Morris, Whitaker, Trammell, Gibson, Lemon and Hernandez, that not any of them has got any interest from Cooperstown… 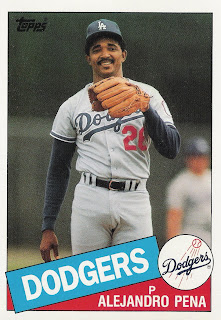 The third and final card is #17 of Dodgers pitcher Alejandro Pena. As a kid I didn’t have cable, but I could watch local games of the Mets, Yankees and Red Sox. Pena always beat the Mets. He led the NL in ERA in ’84 with the Dodgers as a starter and switched to the bullpen with them when he came back the next year. As a kid that decision didn’t make sense to me. How do you lead the league in shutouts one year and get moved to the pen the next? My 10 year old brain couldn’t make sense of that one. 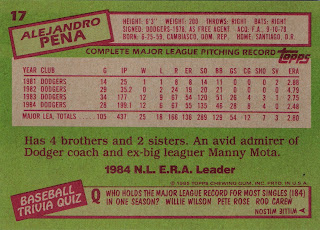 Anyway, he won a pair of rings with the Dodgers and fell back into my TV radar with Atlanta. At this point we had basic cable and I could watch Braves games on TBS. Pena will probably be remembered most by me as being on the hill when the Twins pulled it off in game 7 in 1991. I was pulling for the Twins and that was a pretty great day for me. One of the best World Series I remember. He was back with the Braves when they won it all in 1995 and he called it quits soon after. I think he has 3 rings on his fingers. Not a bad career. Anyway, that is my foray into 1985 Topps Super. I am fascinated, but not in love. I have 2 more packs of this and I can’t decide whether to rip them or trade them sealed. Does anyone want one? Speaking of want... I have quite a few OPC dupes from '83, '84, '85 and '87 and a few from '78 and '79. If you are a team set collector looking for these, let me know... By the way... After posting and proofing this, I didn't intend on posting so many pics of Bruce Sutter, oops... Thanks for reading. Go Rays! Troll out.

I can remember getting a few packs of these at a local drug store, when cards were located in the middle of the candy aisle. They stopped carrying cards after 1995, after about two years of having the wax boxes under a glass case in the jewelry section because of the skyrocketing cost of packs.

I never saw these in packs, but they look really cool! :)

I likem'!! I'm interested in the Parrish card if you are willing to part with it. Let me know.