One of my favorite hockey sets for being a "bang for your buck" type. A very standard design with good photography. 1998-99 season became Wayne Gretzky last season as a player. Wish he retired in an Oilers uniform. For this pack its 6 cards with potential inserts in each pack.

Upper Deck came out with Draw Your Own Trading Card contest.

First card is Mark Messier Starquest insert card in his Vancouver Canucks years. It was a bust as he was on the decline. Played three seasons in Vancouver before returning and finishing his career as a New York Rangers.

Another Starquest card this time featuring Eric Lindros. The pack mention it comes 1:2. I got two on one pack. Lindros was good, but not a superstar as projected dealing with concussions and knee injuries.

Hall of Famer Brian Leetch who played 16 1/2 of his 17 seasons with the Rangers. 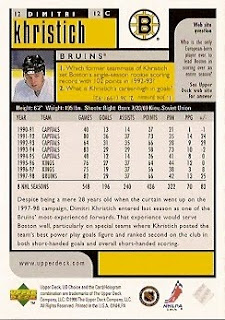 Last base card is Dmitri Khristich. Showing the back side of it

Final card is a "bobbler" insert featuring Brendan Shanahan. Odds of pulling this card is 1:4.

A decent fun pack so far.