Written by Community Gum at 8:27 PM
Only three more packs to go in my purge, and this one is the longest at 10 cards per pack. First off, I want to say that I absolutely loved all the USA basketball sets from 1992 and 1994. Not too long ago, I bought a box of this stuff to complete a set, get a Jordan Highlight insert, and hopefully get a Michael Jordan gold parallel, which I did! This pack is just bonus. 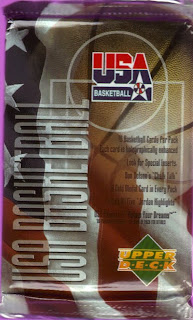 This set had a few little insert sets going on. First there was the Jordan Highlights at 1:35 packs - pretty self-explanatory. Then there was the Follow Your Dreams at 1:14. This was an interactive insert that worked similarly to the Predictor sets from UD or Crash the Game from Collector's Choice. If your player did something in the World tournament, you won something. Lastly was Don Nelson's Chalk Talk at 1:35. Don scouts the participants of the tournament and you get a hologram of his head in the bottom corner. Each pack contains a "gold medal" parallel card. 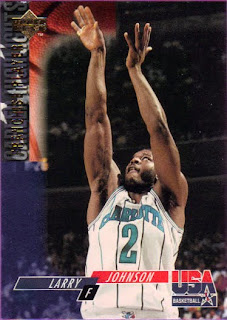 #20 - Larry Johnson - Franchise Player - I would prefer a picture of Grandmama, but what are you gonna do? 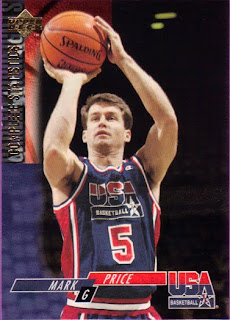 #60 - Mark Price - Complete Statistics - Each member of the team has several cards that go over various aspects of their career or place in the sport. I bet you can't guess what this card tells you. 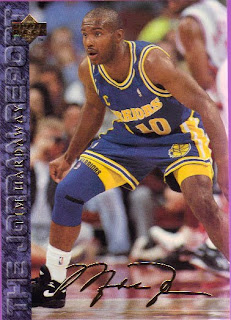 #17 - Tim Hardaway - The Jordan Report - It's Upper Deck, so you know it has to be saturated with Jordan. Sort of similar to Magic reporting on all the Dream Teamers in the 1992 Skybox set, except MJ is reporting on not as great players. 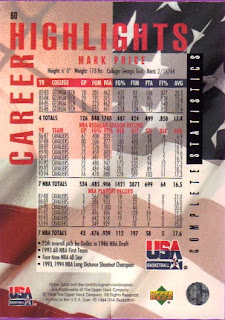 #60 - Mark Price - Complete Statistics - The biggest problem with this product is that every single pack has a duplicate. It's always in the same spot in the packs, too. Your fourth card will match your second card. So, you get to see what the backs look like. Busy design, but I like it. 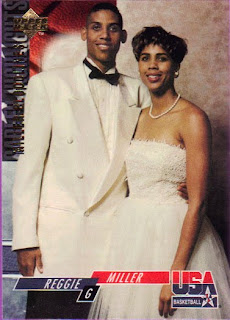 #38 - Reggie Miller - Miller Bloodlines - This card has always bothered me. It looks a hell of a lot like Reggie is going to prom with his sister Cheryl. That's kinda creepy. The back also mentions that their brother Darrell was a California Angel for five years. 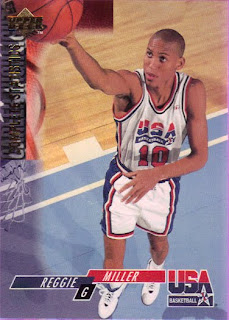 #42 - Reggie Miller - Complete Statistics - Another stat card, but this one has a much better "studio" shot to go with it. 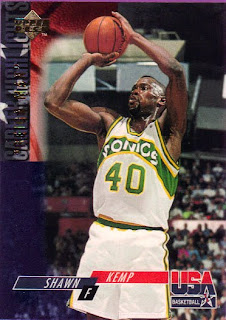 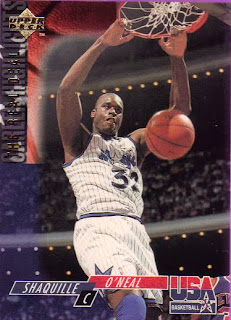 #52 - Shaquille O'Neal - The Real Deal - I think this is meant to be his nickname card, which is strange, because as we all know, he's had many more nicknames since that are much better. I think even by 1994 he had given himself about 30 others that could work, even if Shaqtus hadn't been said yet. 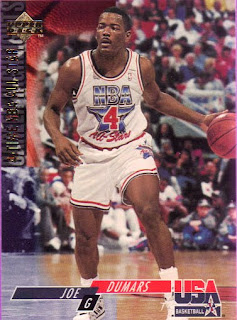 #10 - Joe Dumars - 4-Time NBA All-Star - One of two Pistons on the squad (along with not pictured Isiah Thomas). I was very happy to see Dumars get some recognition. With all the other talent on those Detroit teams, he didn't get much love. 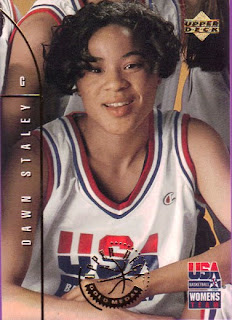 #83 - Dawn Staley - USA Women's Team - Gold Medal Parallel - The full Women's team doesn't appear in this set, just a handful of the superstars. There are also a few cards from USA teams past (which is where the Jordan comes in). It's nice to see a different design given to the women's cards, but it looks too much like a puzzle with that huddle behind her.
This is an easy set to collect at only 90 cards. The only thing standing in your way is the one per pack duplicate. Even the gold medal set wouldn't be all that hard to accomplish if one were to try it. The '92 skybox set was better, but I still enjoy this set quite a bit.

Wow... that Reggie & Cheryl card is creepy as hell.

I forgot all about this set. I'm going to have to go look for my cards that I have of these.

RoofGod, if you have any needs for the set, I'm sure I could fill at least 90% of them if not all. Email me - communitygum at gmail
--Jon