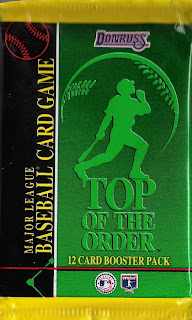 I guess this was a game of some sort. You bought the game but could supplement your team with these booster packs. The label warns quite specifically that you cannot play the game without purchasing the main starter deck which is sold separately. Of course this was a retail item and the security thing was taped over that spiel, but I pulled one away to read it in its entirety. It is a post in itself.

This is a message from Donruss: “It is considered the hardest thing to do in all of sports. A pitched fastball will arrive at the plate in four-tenths of a second. A batter has two-tenths to of a second to decide if he wants to attempt to hit the ball. The ball is over the plate for less than twenty-thousandths of a second. For a batter to make contact and put the ball in play is a skill beyond reason. Now imagine you are trying that ball in a real game…with the ball changing locations…with the crowd screaming in your ear…with the winning run on second base…in the bottom of the ninth. Top of the Order is an interactive card game in which players match their baseball teams against each other in a game that is as close to the real thing as you can get without stepping into the batter’s box. This booster pack contains 12 collectable game cards to customize your roster. In order to play Top of the Order each player will need to buy a starter deck, available separately.” Wow, that was a mouthful! Donruss uses ellipses more than I do! 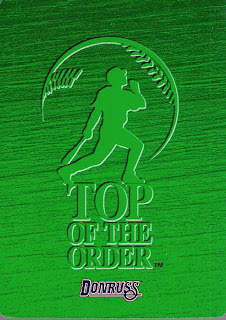 Okay, onto the cards… These look like playing cards; at least that is how they are shaped. They have the rounded corners and waxy feeling like a deck of playing cards. They also have the same green backs. I guess so your opponent can’t receive any tip to your hand. There is a whole bunch of numbers on these cards, but I can’t figure if any of them are the card’s number, so I will just state the player and their team. 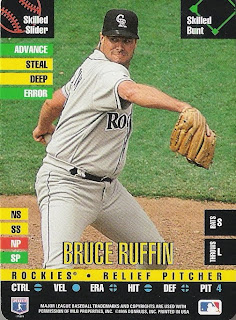 First out of the pack is Rockies reliever Bruce Ruffin. 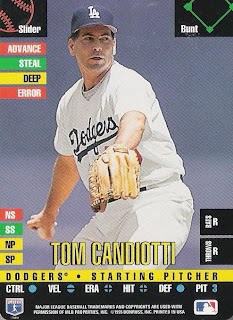 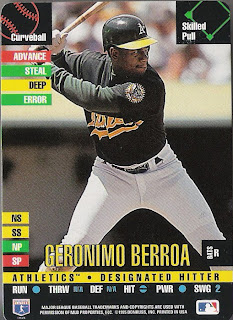 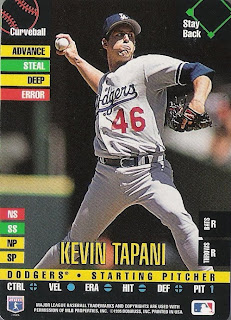 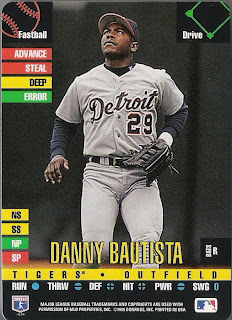 Five cards in and I am not too crazy about my team. I hope it gets better; I have 7 more players coming… Starting with Phillies third baseman 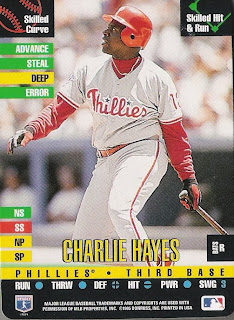 Charlie Hayes, the Indians 38-year-old back up catcher Tony Pena, 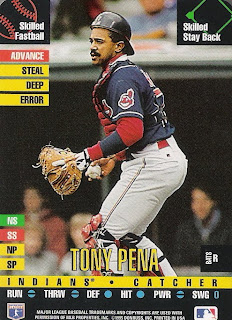 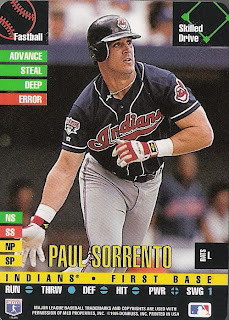 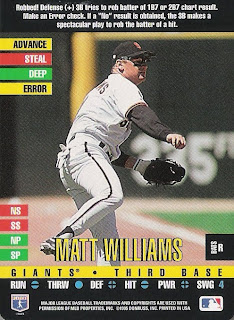 Rockies shortstop Walt Weiss, well at least I have a shortstop... 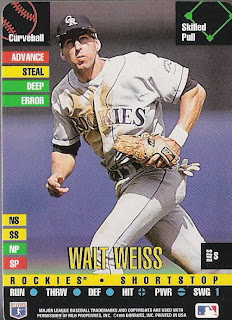 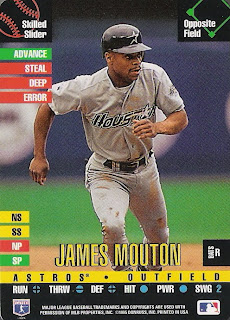 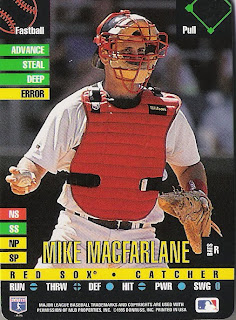 I was hoping it would get better. In the mid-90s it seemed like every body was hitting 40 plus homers, well not on this team. If I was playing this game I would be pissed! How am I supposed to field a team with two catchers, a designated hitter and no second baseman? Do I move Charlie Hayes over? Sheesh. I really hope that if I bought the starter pack I got Randy Johnson, Frank Thomas, Ken Griffey and someone to play the infield! Has anyone played this game before? Was it popular? I have at least one more pack of this. I will rip it quietly and sort out the teams for the group break and will probably never speak of this again. I’m just imagining my 37 year old starter pitching to a 38 year old catcher with Charlie Hayes batting cleanup and playing second base. That would make for a looong season. Thanks for reading. I STILL love this hobby! Go Rays! Troll out.

I never knew this existed. If this was my booster pack I too would be pissed as well.

I'd never heard of this, either... rough luck with the player selection though.

This was Donruss' attempt in the mid-90s to cash in on the collectible card game (CCG) craze that Magic: The Gathering started around 1994. That's why they are shaped that way and have matching backs that look like playing cards.

They even made a NFL football version "Red Zone". They tried flogging it for two or three years or so, but it never caught on. Much like Topps Attax.

NO RANGERS!!?? That pack did suck.

Can't say I've ever heard of these, hey must have come out during one of my hiatuses from the hobby. Doesn't look like I missed much.

I played this game with card shop employees and friends from school. Game play is long and laborious. You are always consulting the chart (only inserted in the starter packs). I would compare this favorably to MLB showdown, a strategy game. If you are looking for replay of the 95 season, Strat-o-matic this is not.