Written by BigD at 9:04 PM
I'm really hating that Topps is the only licensed maker of baseball cards. We've got Series 1 built, don't care for Heritage and Finest is too expensive except for singles here and there. We need more variety!! Well, since they won't give it too us, we'll have to find it ourselves. Which we did! 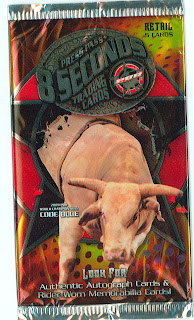 I'd seen these packs of PBR cards for awhile at our local Target, so I grabbed a pack just for kicks. They're made by Press Pass and have 5 cards per pack. The odds are pretty low on the back of pulling autos and event used equipment such as shirts, pants, hats, ropes, etc. We didn't get any hits, but I'll show you what we did get. (By the way, Nobie loved the cards and wants to go after the set now.) 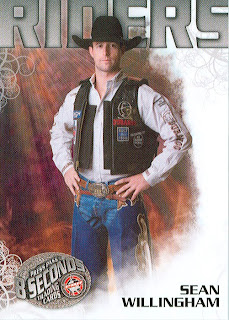 We don't follow the PBR per se, but I have watched my fair share of rodeos over the years, both on tv and in person. I've even made a special trip to Cheyenne for the Daddy of 'em All before.
The card stock is pretty average stuff, but with a nice glossy sheen. The Rider cards have a different full bleed photo on the back (sorry, forgot to scan) with a little write up. Interestingly enough, some of them, like 'ol Sean here have a list of injuries sustained. During the 2007-2009 time span Sean endured a strained right forearm, sprained high ankle, bruised left ankle, concussion and a strained left groin on his way to earning close to $1 million. Maybe it was all worth it after all. 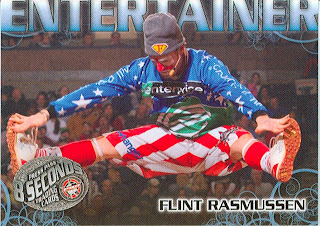 We also got a clown card, though I'm pretty sure they prefer the term bullfighter. Flint here, used to be a schoolteacher. I think I'd rather pal around with bulls, too! 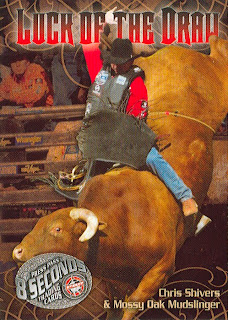 This Luck of the Draw card recaps the legendary match up between Chris Shivers & Mossy Oak Mudslinger. (Don'tcha just love sponsorships?) Chris would have won $1 million dollars for the one 8 second ride, but the 3 time "Bull of the Year" bucked him off in 2 seconds. Not much of a match I'd say! 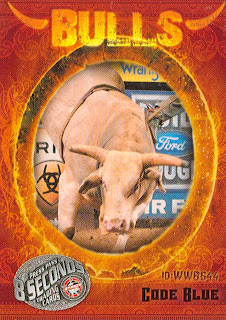 This Bulls card was Nobie's favorite and we got a good one in our first pack! Code Blue here has never been ridden in 14 tries including 3 "outs" at the 2009 PBR World Finals. He's a Bad Ass! Maybe Night Owl should add him to his "I'm a Bad Ass and You're Not" Club 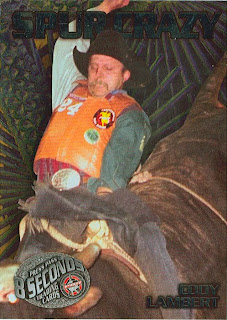 The last card in the pack was a nice little Spur (man I hate that word) Crazy insert. It didn't scan well, but it is quite shiny! This card is of a retired rider by the name of Cody Lambert, who if I'm not mistaken, was one of the characters in the movie 8 Seconds. That movie focused on the short life of Lane Frost (played by Luke Perry) who was tragically killed while competing. Cody Lambert was one of Lane's "sidekicks" who liked to dabble in poetry (at least in the movie). It's a pretty good flick if you haven't seen it.
So, there you go. Something a little different. Like I said, Nobie wants to collect the set. It's 100 cards I think and I checked the "stats" of a hobby box and you get 3 autos and 3 relics in 24 packs, which seems pretty good to me. I don't know if we'll ever pull the trigger or not, but we'll see. Later.