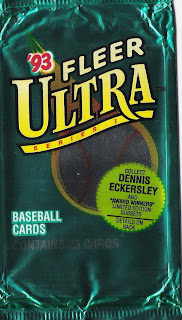 I really didn’t want to post this pack because it has 23 cards in it and that is a lot of scanning, but I am committed. Or should be…
Here is what we got: 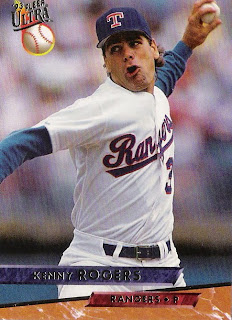 Card #285 of Rangers starter Kenny Rogers. Rogers was 3-6 in 1992 working out of the Rangers pen. Of course in 1994 he threw a perfect game. Those used to be pretty special, now they seem to happen every week. 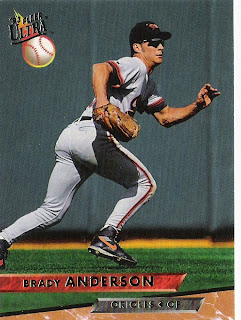 Card #138 of Orioles centerfielder Brady Anderson. Brady was an All Star for the first time in 1992 when he was third in the AL with 53 steals. 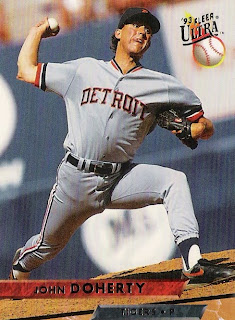 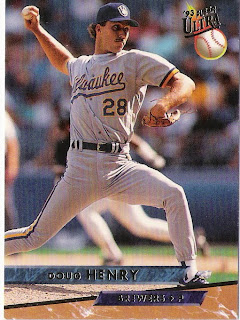 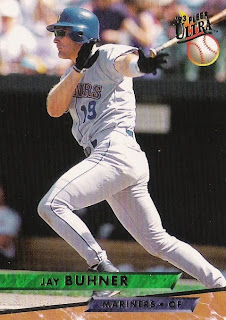 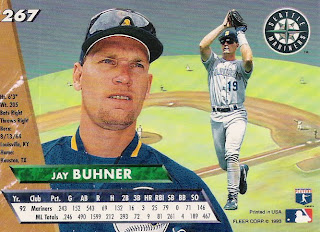 Bone Buhner hit 40 plus homers in 3 straight seasons and topped 300 in his career. 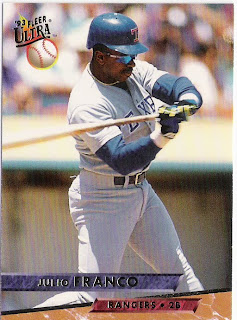 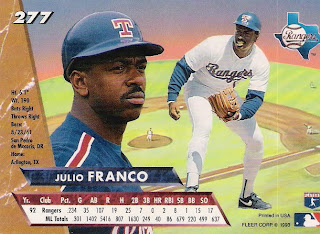 The pic on the back shows Franco still playing second base. Injuries limited him to 35 games in ’92, one year after he won the batting title with a .341 average. 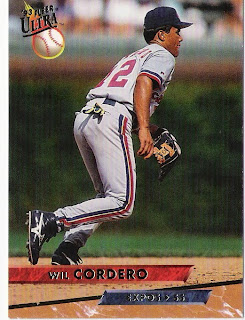 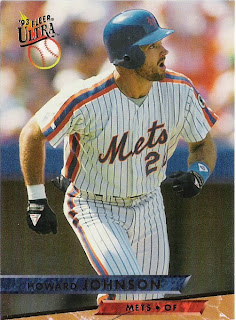 Card #76 of Howard Johnson of the New York Mets. Hojo was a bonafide superstar in New York for a while, but ’92 was the start of the downslide… 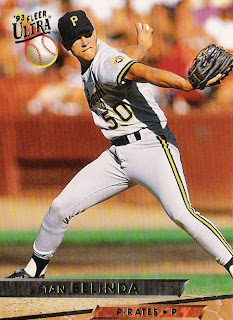 Card #95 of Pirates pitcher Stan Belinda. It’s nice that Fleer included a Pirate in here. Belinda was the bullpen ace for the Bucs; he saved 18 games in ’92 and 19 more the following year. 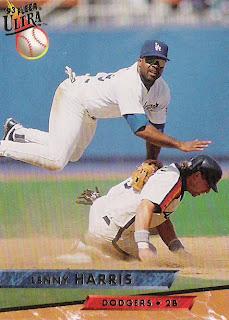 Card #54 of Lenny Harris. I seem to have a knack for pulling cards of the top pinch hitter in baseball history. This guy found a niche, worked it, and had an 18 year career and over that time had a bunch of cards that I always seem to pull. Looking at this one, I won't complain because it shows Harris as something I never think of him as, a good middle infielder. 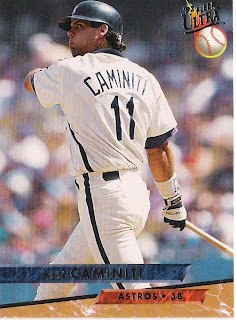 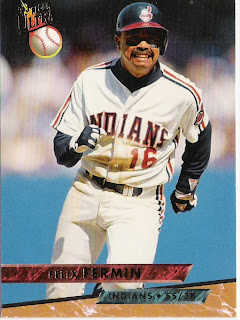 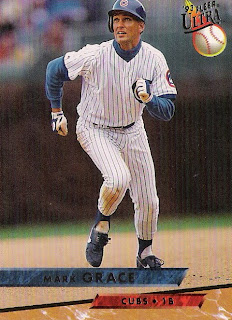 Card #18 of Cubs Gold Glove first baseman Mark Grace. Amazing owns 4 Gold Gloves, a World Series ring and a career .303 batting average over a 16-year career. Not enough for the Hall of Fame, but he was damn good. 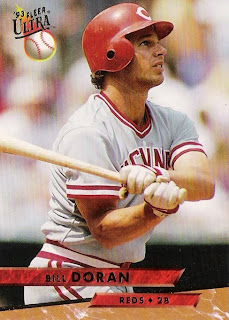 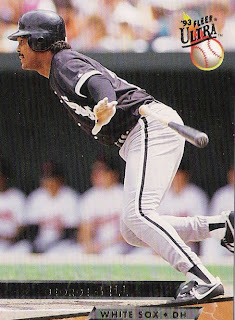 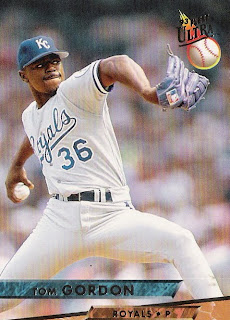 Card #207 of Royals pitcher Tom Gordon. Flash was a mediocre starter who became a great closer, for a season. 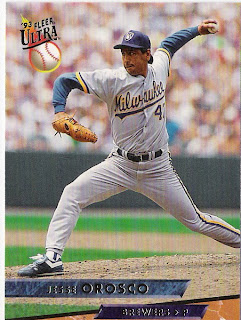 Card #223 of Brewers reliever Jesse Orosco. Speaking of closers or players who played forever… Jesse O was a spring chicken at 36 years old in ’93; he played for another 10 seasons. 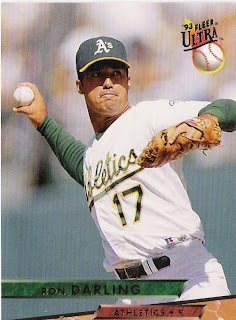 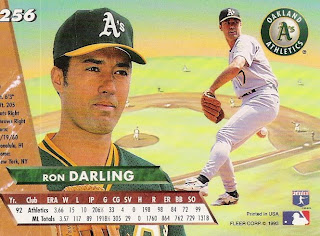 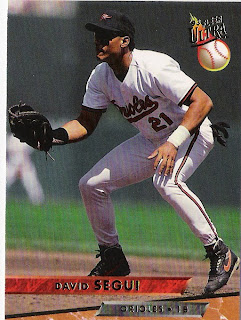 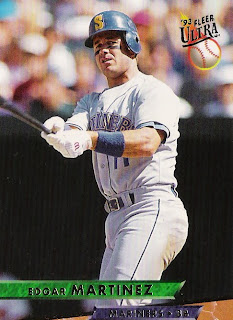 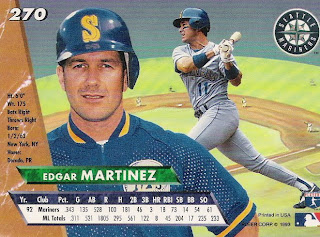 Yep, Edgar wasn’t always a DH. He played third base regularly in 1992 when he won his first batting title. 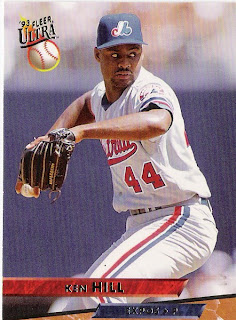 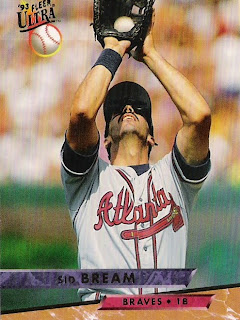 I can’t possibly think of anything to write about Sid, 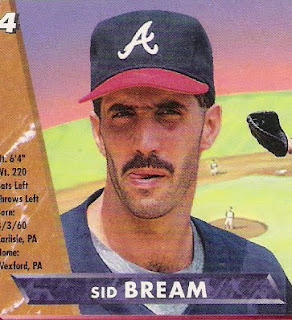 but I love the pic of him on the back of the card. 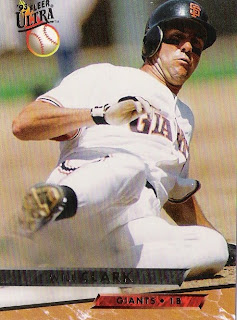 And finally, the last card out of the pack is #130 of Will “The Thrill” Clark sliding in safe with a face full of eye black. He was one of the best and most intense players of my childhood. Another Gold Glove first baseman who retired with a .303 batting average. 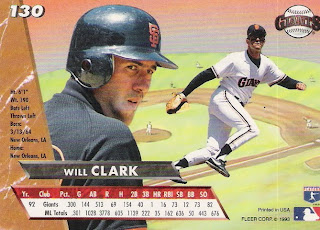 Unlike Gracey, the Thrill never got his ring. His Giants lost to the A’s in the famous 1989 World Series, his only trip to the Classic. Wow, after scanning and listing 23 cards I am pretty freaking tired. I think I deserve a beer. All in all this was a pretty great pack. No Hall of Famers (yet) but it has a couple of MVPs, a ton of All Stars, Gold Glovers, Silver Sluggers and great players from the 80s and 90s. The photography is good and the back of the card is well composed and each card offers 3 seperate sharp color photos of the featured player. I tried to put this set together back in '93 and I probably finished it, too. I don't think I will chase it again, but it aint bad. I hope everyone is enjoying the long weekend. I love this game, I love this hobby! Go Rays! Troll out.

I nearly cried that day.

Captain, when I pulled that Bream card I hoped you would comment. It is all yours of course. If I ever finish this rip, Sid and all of the other Braves will be heading to Canada. Lets see if I pull a Francisco Cabrera...

Night Owl, it was a sad day for Trolls and Owls alike. Probably for Dog Faced Gremlins too.

I won't comment on Sid since it's been covered. I will say...THRILL! Two Rangers...that pack was meant for me.

Couldn't Fleer find a beter picture for Kenny Rogers? It looks like he is getting ready to unleash a grunt that would rival a female tennis player.