Written by BASEBALL DAD at 9:49 PM
While on vacation, I came upon a store in a Cincinnati mall that had a huge assortment of old packs of of cards. This is one of my purchases. 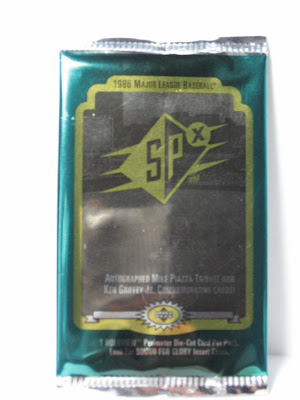 There was only 1 card per pack which sometimes made it a hard decision as whether to make the purchase or not. Even now it was hard, but I needed this wrapper for my collection. 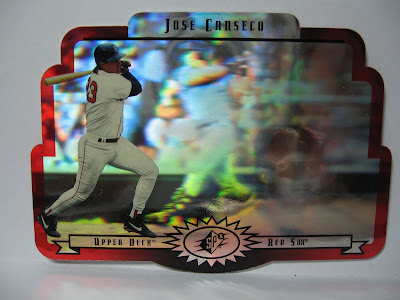 Of the 60 players available in the set, including 4 Indians, I had to get one of the most controversial figures in the hobby today. #8, Jose Canseco. The entire holographic set is die-cut and paralleled by a gold version, which carries a premium value of about 1 1/2 x the base card.
There are 3 inserts including "Bound For Glory" which highlights some of the stars of that era.
Ken Griffey Jr. and Mike Piazza each had a 1-card Tribute insert, of which 2000 were autographed 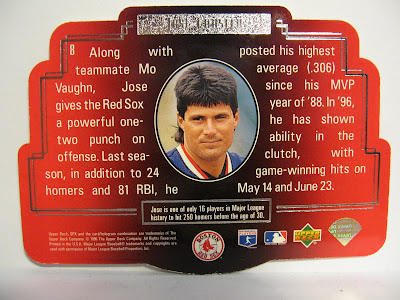 There are no stats on the back. Just a brief story and some highlights and an informative fact under the player's photo.
The mid 90's provided some very new and unique technology but many of those cards have dropped drastically in value as the curiosity for these products has dwindled.

If anyone has the Clemens from this set I need it...

You should let Mario of Wax Heaven know you pulled it...

Reading this for the first time, makes me wonder if there is just one card in a pack, would the traditional "insert" actually be an "insert" or just the card in the pack?